That’s right, Tom Petty, there ain’t no easy way out.

There will come that fateful moment when your fetus needs to be evicted from your body’s cozy B&B, and when that moment arrives there are only two routes out.

Neither is pleasant, although one is more scenic.

And yes, while it’s true that you have probably been waiting for this day with anticipatory joy, that’s only because mother nature has provided you with self-delusional hormones in epic quantities. 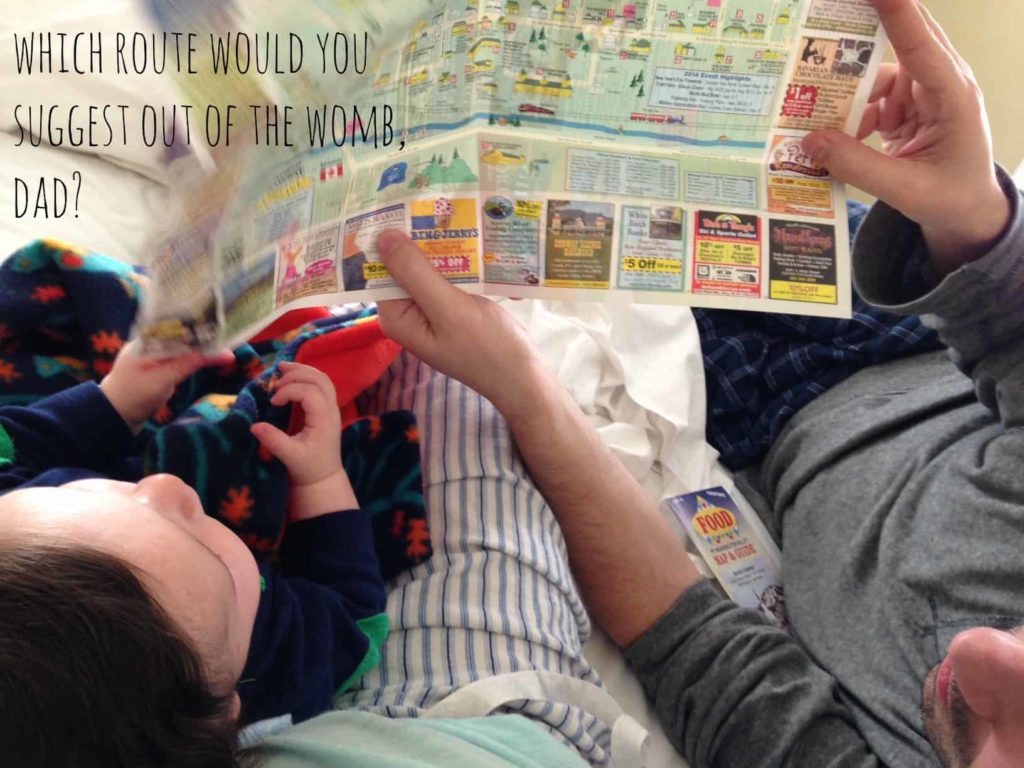 I really, really wanted to have a natural birth. And by that I mean a vaginal birth with lots of drugs in a sterile and impersonal hospital setting, with no less than four medical professionals at my bedside and a vacuum, extra forceps, and a SWAT team on standby.

I realized that I was not going to get my wish sometime around the 8th month of my pregnancy, when it became apparent that the bulge jutting out of my side was not, as I had hoped, a giant misplaced goiter, but was instead my baby’s head.

Nolan, it turns out, was in the transverse position, meaning he was horizontal in my stomach.

This is fairly rare, and so I felt pretty badass about it. I was all, yeah, no big deal, my baby isn’t interested in the normal positions.

He’s his own man. He’s basically saying, “what up breech babies, that’s all you got?!”

Nolan’s position would have been really awesome if he was competing in the high jump. Turns out it was less awesome for childbirth due to the fact that my vaginal opening is not as wide as the state of Kansas.

Nothing against my vaginal opening, yours isn’t that wide either. If it is I would like to hear from you. 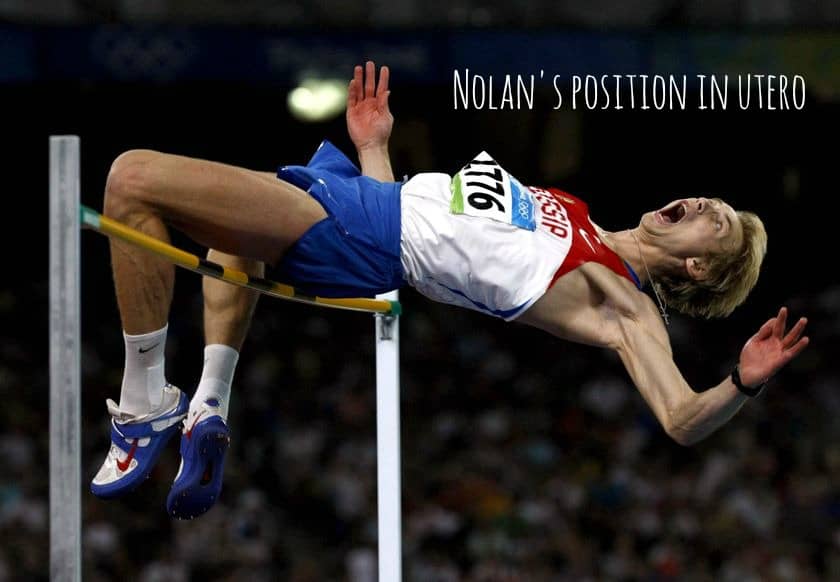 The reason I wanted to deliver vaginally, I realized, was a little bit different than the reasons other moms cited for wanting this.

After reading many online forums, I learned that women often feel strongly about wanting to push their little bundle out the southern exit because they want the experience of childbirth and they do NOT want to feel cheated out of this.

I can understand that, although this experience sounds downright horrific based on every friend of mine who has ever delivered vaginally.

Women, it seems, want to feel this primal connection to their child and, moreover, to the act of birthing.

For some reason pregnancy brings out a very “we are mammals” sentiment in the masses, and people who would never consider wanting to feel, say, a root canal, suddenly want to feel something much, much worse.

It’s a strange but common phenomenon.

I had friends say to me, when it was clear that the Nolan train wasn’t leaving the station via the preferred exit, “It’s ok, Liz, having a c-section won’t make you any less of a mother.”

Huh. That thought never even occurred to me!

I wanted to give actual birth because I am competitive and like to pretend I’m tough! Not because I thought it would make me a better mother. I just like overzealous challenges that I can later brag about.

My upset over not getting to “compete” in the labor and delivery unit was real, but it was a little like the time I went skydiving – I had no interest in actually jumping from a plane, I just wanted to be able to say I did it after the fact.

Also, I had trained. I had taken the prenatal classes. I had paid actual money for them.

And I had practiced my breathing techniques! Techniques that did not appear would ease much more pain than that of a bee sting, but still.

I had practiced swaying on a giant ball to coax my baby out with my rhythmic bounces and periodic hip swivels.

I had even bought a tub of olive oil, ready to slather it onto my nether regions! (For those of you who have not prepared for birth, this nifty little trick is called a perineal massage.

It helps reduce the risk of tearing during delivery, and as a side bonus you can use the surplus olive oil for many tasty Italian dishes).

All of this intense training was for naught. A c-section was our only viable option, and so c-section it was.

Yes, I would not experience the birth of my first child the way I had hoped, but we are lucky to live in a place where safe alternatives exist.

Also, and this is no small thing, a c-section meant an automatic five day stay at the hospital.

As we all know hospitals are like hotels but with catheters and adult diapers readily available. So better! And also I LOVE hospital food! The hospital where I delivered Nolan makes an excellent Coq Au Vin. Things were looking up. 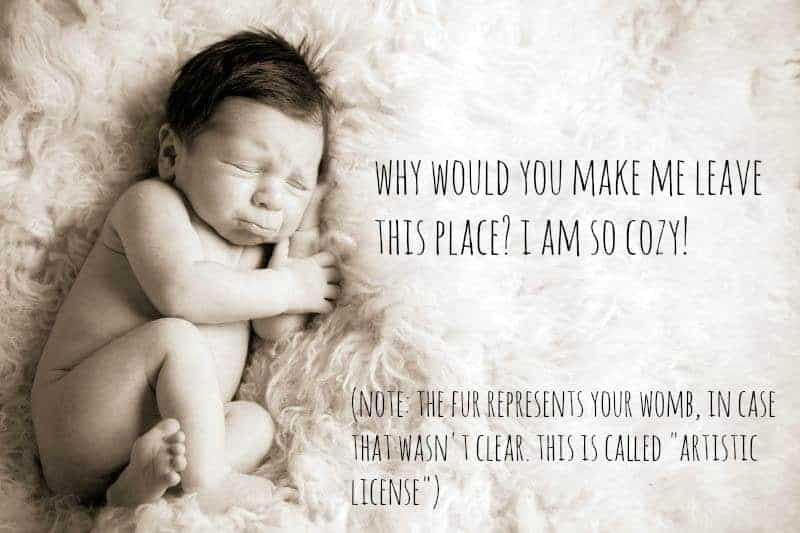 The big day eventually arrived and things started out smoothly.

Brian was asked to wait outside while I was “prepped.”

He was excited and anxious, dressed in scrubs, hat, and booties, like an extra from Grey’s Anatomy.

I was busy having my spinal block administered, and quickly felt the lower half of my body go pleasantly numb.

The plan was for me to be awake during the surgery, but totally numb from the waist down. I remembered a good friend saying she found her c-section to be “a very civilized way to have a baby.”

This is civilized, I thought.

By the time Brian was let into the operating room the surgery was already in full swing.

He had barely gotten seated when the obstetrician exclaimed, “I see the baby’s butt!”

This was jarringly fast for Brian, who had anticipated more of a build-up to the main event. It was like going to a movie with no coming attractions. It throws a viewer off.

And with that, Nolan was out, via the express train. It was kind of amazing and kind of gross. 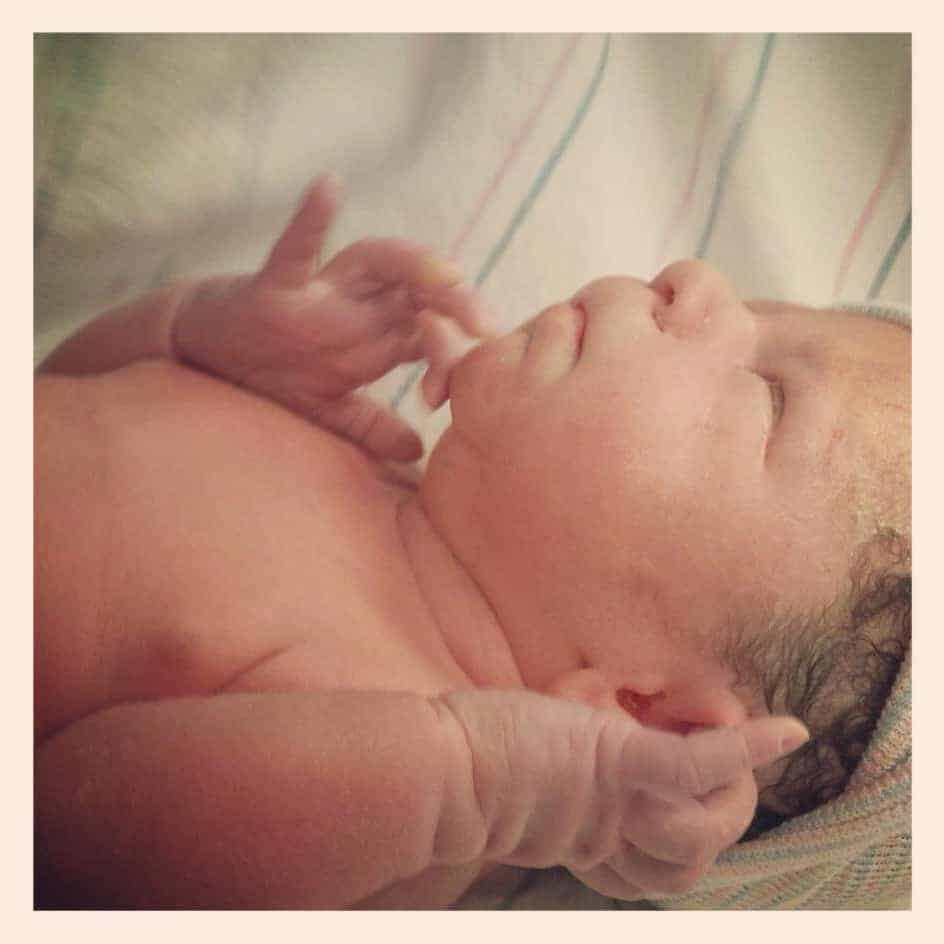 And then shit got real. Just as Nolan made his big debut – at the very height of emotion at this whole disgusting miracle – I started to feel stuff. Like, a lot of stuff. My spinal block wasn’t so much “blocking” anymore. Well, damn.

What’s the good of a spinal block without the block?

This was rapidly devolving into something decidedly uncivilized.

Remember, getting the baby out is only the first part. After you evict your tenant you still need to close up the apartment, you see. Lock the doors behind you and all.

“I can feel this!” I was trying to keep the panic down in my voice. Perhaps I sounded too un-panicked, because the anesthesiologist was surprisingly nonchalant.

“No, like I can REALLY FEEL this surgery!” I could feel tugging 5 minutes ago. I felt SURGERY HAPPENING now. If I’m not being clear, those two feelings are different.

“Oh, you do? Hmm….Looks like you metabolized the medication too quickly!” His tone was breezy. “Next time you have a surgery you should make sure to tell them that your body seems to metabolize meds too fast.”

Um, yes, noted. Next time I’m having major abdominal surgery I’ll be sure to tell them. Too bad I’m in surgery RIGHT NOW.

Brian could see the panic in my eyes.

I had kind of forgotten I was tied down to the table until the part of the story where the spinal block stopped working and I panicked and tried to free myself.

Good thing I was tied down, actually.

Brian was in his own type of bind.

Unbeknownst to me, he had just been told that he needed to leave the surgery area to accompany Nolan to another room, where I presume they make sure he has all of his most important bits. Nolan, not Brian.

Brian’s bits were already accounted for.

Not wanting to cause more panic, but clearly seeing that I was losing my shit, Brian approached me cautiously, the way one might approach a skittish but rapidly angering beaver.

“Ok, I’m gonna go now…” His voice was soft. He was trying to appear calm so that I may be calmed. Which is not possible when you are actively being operated on with very, very little medication.

Uh, ok. That’s cool. I’ll just stay here and fight off my captors alone. My eyes pleaded with him but he was quickly led away.

After about five minutes Brian was sent away from Nolan’s room, too. Poor guy.

He ended up wandering through the halls, full scrubs, without either his wife or baby.

He was hoping, I think, to be with at least one of us during this most critical time.

But then I was hoping to not feel my surgery, so that made two of us who didn’t get what we wanted.

And that is pretty much how it went down. 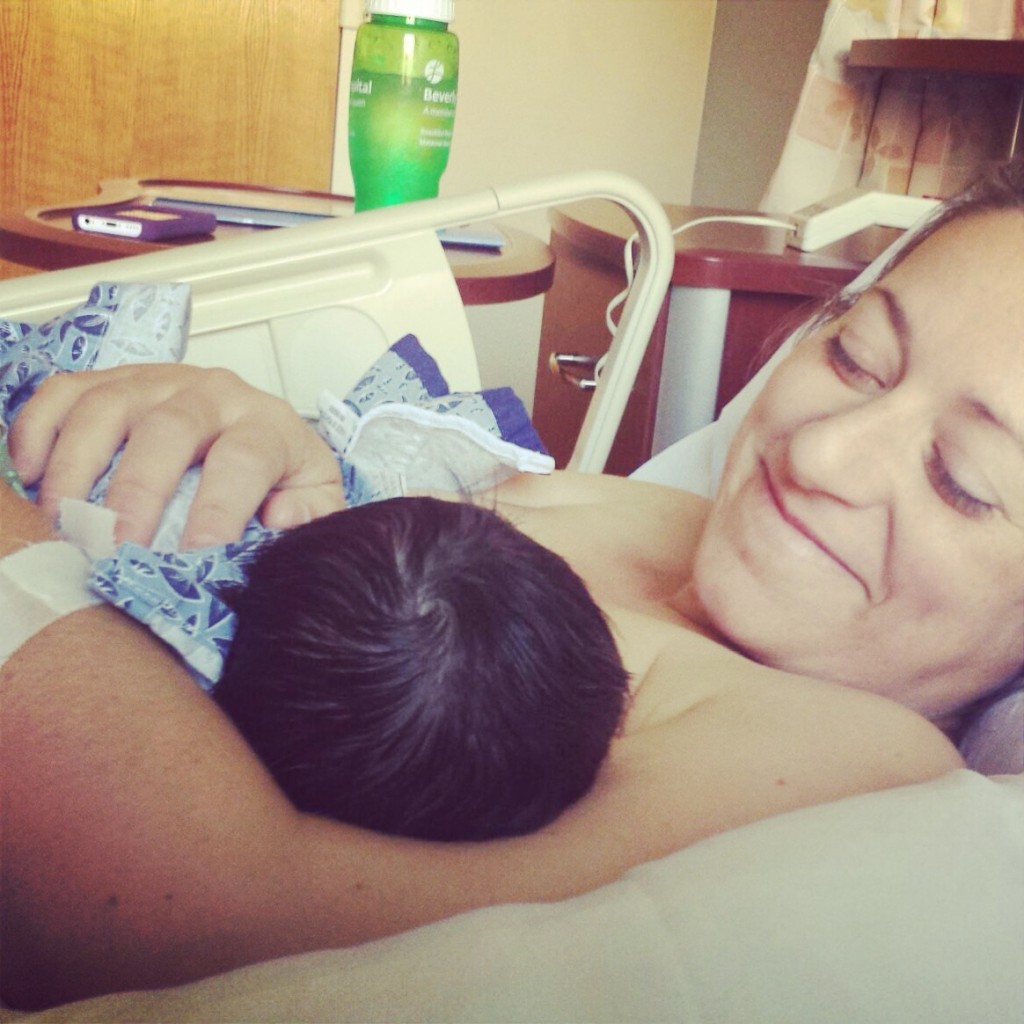 This is my first photo with Nolan. I do not even remotely remember this moment. And I had read that I would “never forget the first time I held my baby in my arms.” I couldn’t remember it 5 minutes later. Based on this picture it was beautiful. And hairy. And heavily medicated with post-operative tranquilizers.

Which would you prefer, c-section or natural childbirth? How was your labor and delivery? Let’s hear it. Be descriptive. I want to picture your baby crowning.