Every day, from noon until 2:00, we drive around for “car naps.” This, as you may have noticed, is a two hour block of time. That’s insane you may be thinking.

Which, yes, obviously it is. 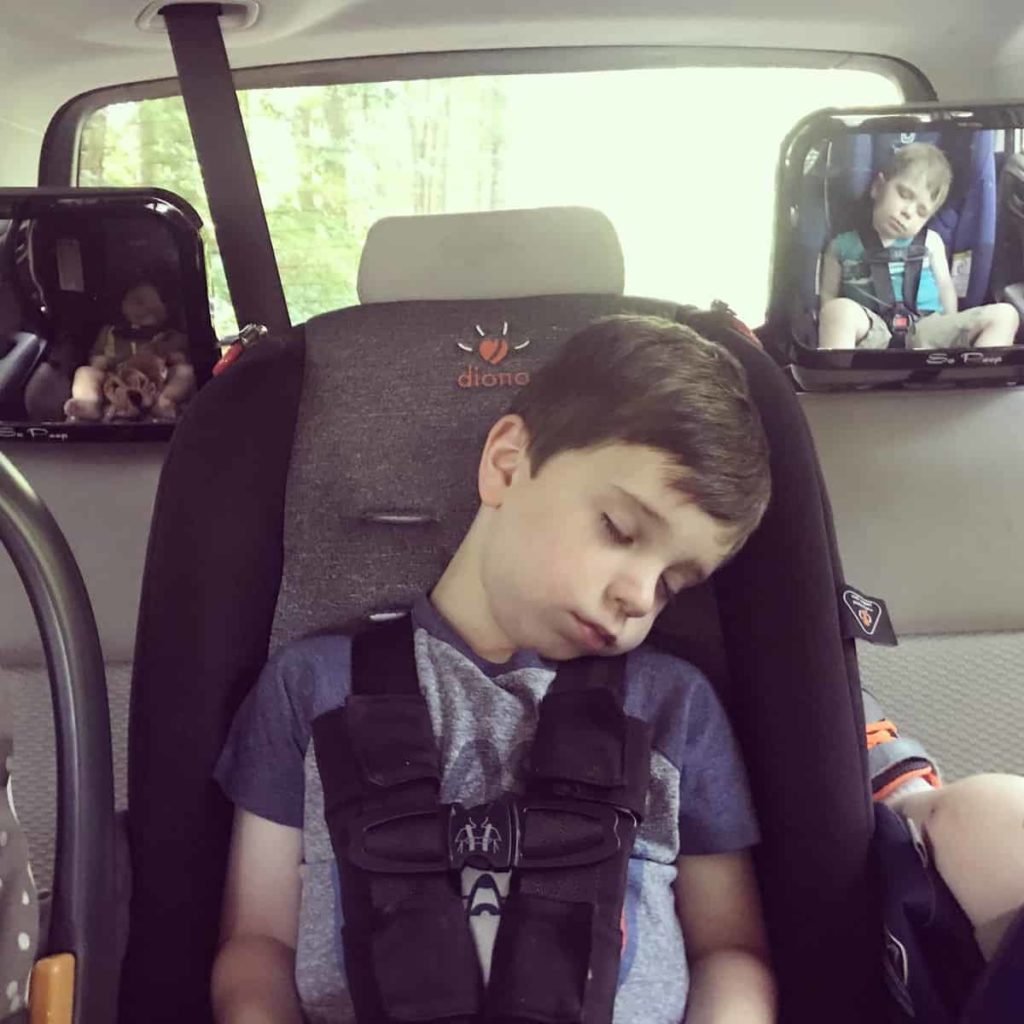 If you are tempted to answer “incompetent parents” then, first off, RUDE. Second off, fine, technically that is the correct answer.

Anyway, every day the 3 kids and I hit the road for an extended trip to nowhere. Did I say nowhere? That’s not entirely true. We usually go to get coffee at a drive through and sometimes we go to pick up junk I found on Facebook Marketplace.

When it’s the latter I inevitably find myself awkwardly trying to explain to some random woman in NH why exactly I thought it made sense to drive an hour across state borders to pick up, say, a tiny chair. Wow, this woman will say, You must have really wanted this tiny chair!! 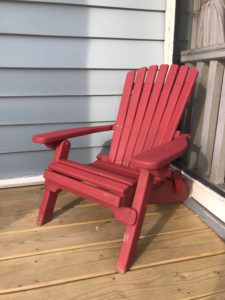 Who wouldn’t drive 2 hours to buy this? Oh, nobody?

Eh. Really I just had two hours to kill, so why not? It would almost be a “When in Rome” type of thing except I’m never in Rome.

A month or so ago I was having one of those days with the kids – everyone was whiny and frustrated and just miserable. We needed to get out of the house, which everyone knows is basically impossible when you have kids. But this was GOING TO HAPPEN.

“Fine! I don’t want you to have an accident Nolan. If you do, there will be a consequence, because I’m warning you now you should try to go.”

*Please note the above use of foreshadowing. This is a classic literary technique, because I’m sure you’ve noticed that I’m a classically trained writer.

Bathroom forsaken, we jumped into our bed on wheels, attempting to find a brief bit of peace and quiet. Our destination was to pick up a boombox that I found for $10 on Marketplace. SCORE! 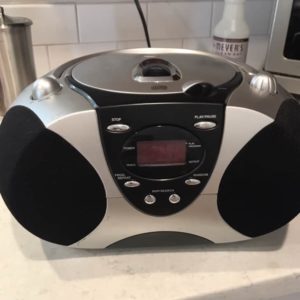 Here is the boombox in all it’s glory. I know you’re jealous, but no you can’t have mine.

We headed south on Rt. 95. The kids were wild animals in the backseat, which is only partly their fault. I say “only partly” because to be fair, we don’t have them set up for success. We have them 3 across in the back of a Subaru. This gives Thomas a clear route from his foot straight into Nolan’s face, and sometimes when you’re tired it’s hard to be your best self and keep those feet parked.

*The fighting in the backseat grates on me like nothing else. Strangely, Brian is able to tune this out almost completely. He looks so zen when we’re all in the car together, as if it’s not WWF in the backseat, that I feel like he’s on some sort of tranquilizer. I hope he’s not, due to the fact that he is driving.

But where was I. Car naps on 95 South. The kids are acting like animals.

We get to my boombox dealer, and I pass him a crisp $10 through an open window and make off with my prize. I’m starting to feel better about the day. The kids are quieting, and slowly drifting off for naps. The boombox is gleaming in the sunlight.

Bridge Over Troubled Water comes on the radio (please review earlier note on foreshadowing). We are all happy as can be for a moment.

That moment was brief.

When you’re down and out

When you’re on the street

When evening falls so hard

I will comfort you (oooo)!

At about that point in the song I feel it.

The “it” being that unmistakable knowing that if I don’t get to a bathroom in roughly, I dunno, 5 minutes ago I am going to be in BIG TROUBLE. Well my friends, that feeling was upon me, with Simon and Garfunkel providing a perfect soundtrack to my hell.

This was a critical situation and I had no where to turn. With 3 sleeping children and nary a rest stop in site (and let’s be honest, even if there was a rest stop there was zero chance of me getting all the kids out of the car and into the bathroom on time) what was I to do?

Please be honest with yourself here. Take a pause and ask yourself the hard question of what YOU would do here before you continue reading.

I grabbed the diaper bag from the passenger seat and fished around with my one free hand. It fell upon both a Size 5 and a Size 1, and I thought Yeah, that should do it.

I tossed on those bad boys while continuing down 95 at full speed, and threw in an Aden and Anais

blanket for good measure. That blanket will never see the light of day again, which is a shame because it’s of high quality. But it lost it’s life to a noble cause, and for that I thank it.

At this point in the day I am actually enjoying myself. You know when things are sometimes SO BAD that they actually become kind of good?

Earlier in the day I had been thinking, today can’t really go any worse. But that thought came way before I was forced into a double diaper while barreling down a freeway. Turns out it could go WAY worse!

There was no possible way to continue our car naps in my state. I have a new level of empathy for toddlers crying for a diaper change, because as it turns out that sh*t is uncomfortable!

My only recourse was to head home and hope that I could sneak into the house without waking up the kids. I got to the house and the second I turned off the engine all 3 of the kids woke up screaming, their naps cut way too short.

Nolan immediately starts yelling “Ani had an accident!! It smells terrible in here!!!”

Because I have no shame I just nodded, and in my silence implicated my tiny daughter.

I then proceeded to hobble into the house, wrapped in layers of Pampers, hoping not to cross paths with the neighbors. My kids, whose sole mission was to destroy me, were screaming to be let out of the car, and as it was about 85 degrees I thought this was a reasonable request, albeit not one I could grant at that time.

The irony that I told my son that he “better not have an accident” was not lost on me. I will not be saying those words to him again, until I myself achieve 365 days “accident free.”

We all need goals. 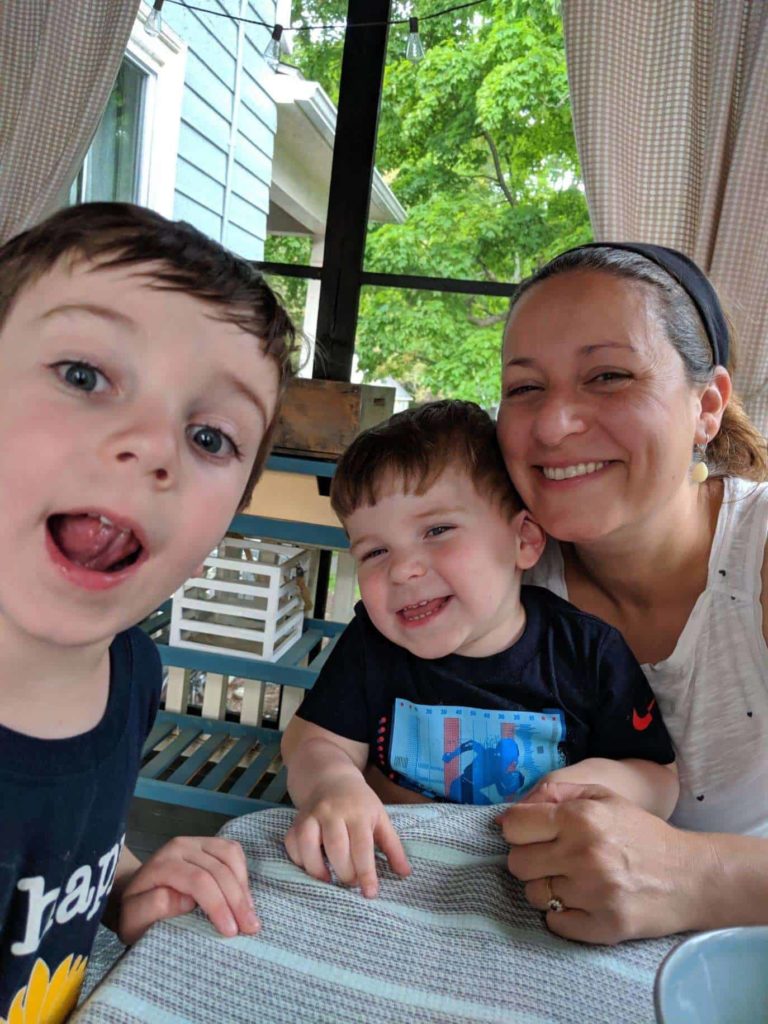 Need more laughter in your day? Follow A Mothership Down on Facebook! (A lot of the action is over there).