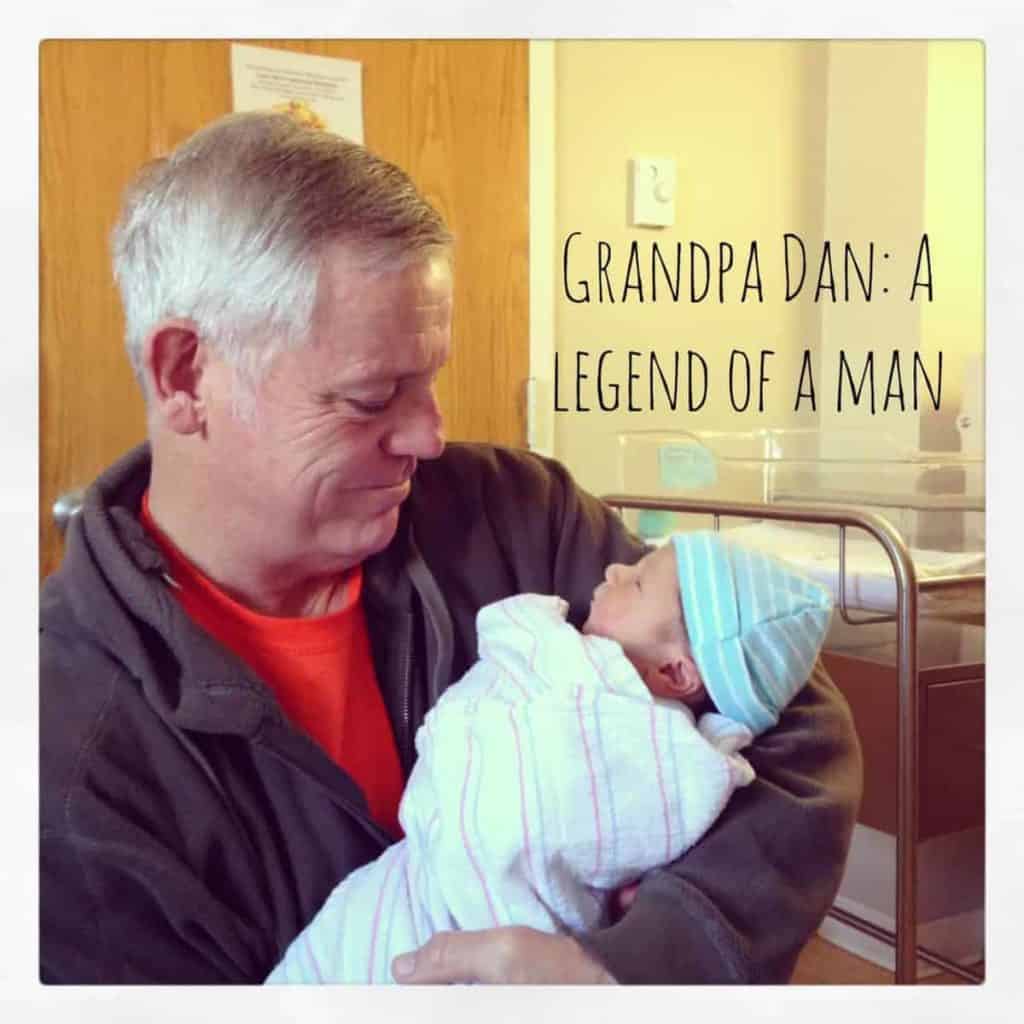 Some of you have already taken note of the fact that my dad, known to Nolan as “Grandpa Dan,” is kind of a character. Actually, calling my Dad “kind of a character” is like calling Kanye West “kind of grumpy.” My Dad is a legend. And Kanye is just straight-up PISSED.

Today’s post is to serve as a brief introduction to the marvels of my dad. It will do nothing to illuminate the mental status of Kanye West.

First, Grandpa Dan is an athlete. He is a former football player, and tough in a kind of half-crazy way. He’s broken his nose a LOT of times. No big deal. Or as my dad likes to say, “No big NBD.” He is the kind of guy who will drink Sambuca shots after a morning run, but only on the mornings of the vernal and autumnal equinox. Because, why not.

He also has a very open mind when it comes to fitness.

“I’ve been following this book, and there’s really something to it!” His eyes light up, his voice grows more animated. This is my dad speaking to my husband Brian about a fitness book that he has found helpful. Nay, it is more than that; it is a book he loves from some deep part of his soul. 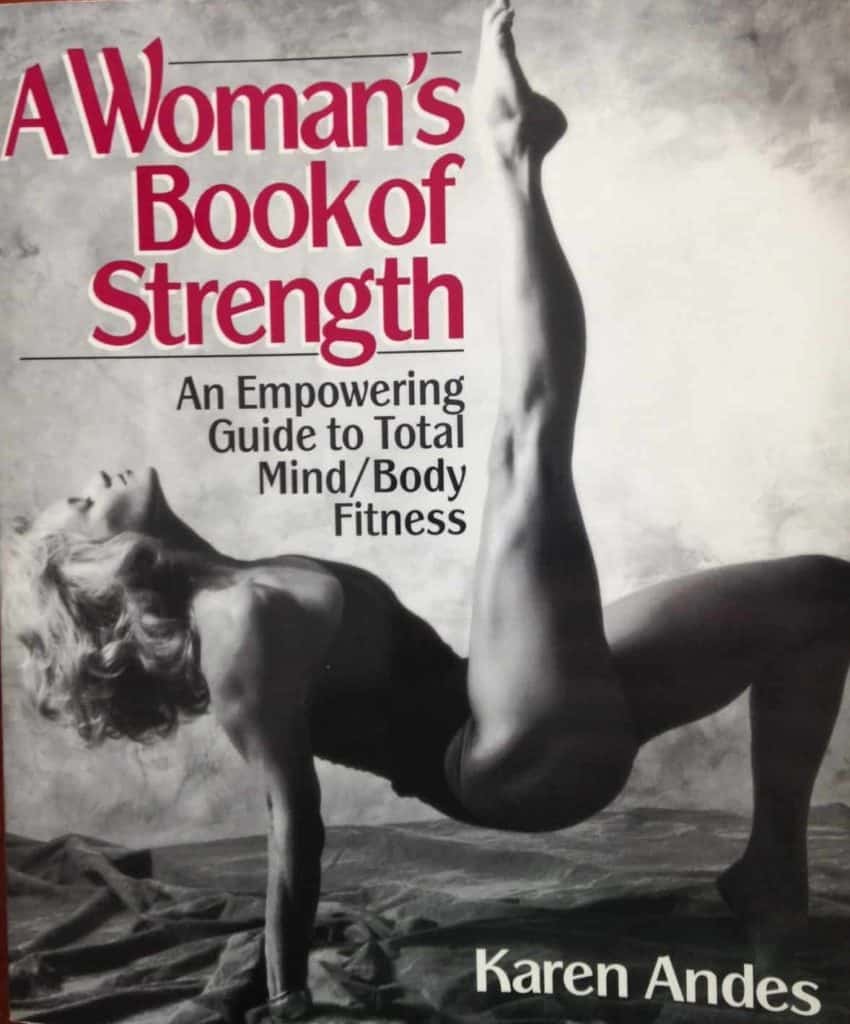 Sure, this book looks like it was written in 1970 by a ballerina on a commune. Sure, the cover alone would be enough to cause a lesser man to disregard it, ignoring the wonders and wisdom inside. But not Grandpa Dan! He not only follows the guidance in this book, tapping into his feminine sensibility, but he shares its lessons with any man or woman who will listen. Someone in our family has found their inner vagina, and it’s not me.

Although he cares about general athleticism, my dad has long had an emphasis on neck fitness in particular. I distinctly remember when I was a child my dad telling my sister Catherine and me that it was important to have strong necks in case we were ever faced with execution by way of hanging. I guess now and again someone goes to their public hanging, only to have such a sturdy neck that it won’t break as it was intended to. Presumably they are then set free, which, according to my dad, is why it is crucial that we girls focus on having strong necks. You know, to avoid the whole “death by hanging” threat that so many young girls are faced with nowadays. Forget Gardasil, we need a national neck-strengthening program! Maybe partner with the Girl Scouts. This seems very prudent to me now, as a parent myself. It also probably explains my long-standing discomfort with turtlenecks.

Some of you might also remember (from the post Advanced Maternal Age, Here I Come!) that my father strengthens his neck in an unorthodox fashion. Here is an artist’s rendering: 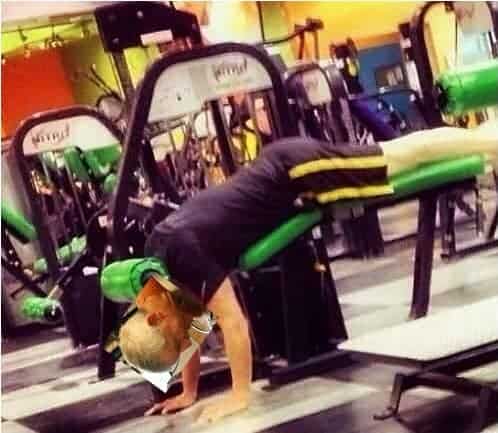 A note of clarification from Dan himself: “The machine I used was similar, but I would kneel in front of it, with my head underneath the green roller, but from the front.” So there you have it.

As an aside, I had the widest neck circumference of any girl in my high school class, which I know from when we were all measured for caps and gowns. No big NBD, but I pretty much crushed it in the big neck category. Nolan can lift up his head and move it side to side rapidly, so I’m pretty sure he has an advanced neck too. Yeah, he had that issue with needing yeast creams for under his neck folds for awhile, but that was just a phase.

When my sister and I were little, my dad coached our soccer teams. It was really hard for my dad for awhile there, because he came from the whole “guy playing football and growing up in a tough neighborhood” thing, and we little girl suburban soccer players were pansies. My mom would try to remind him that we were in fact little girls and not grown men football players, and that we needed to be handled as such. This was confusing to my dad, but he made do. One unorthodox way that my dad found to toughen us up was to line us all up on the goalpost, hanging on with our tiny little hands, and throw soccer balls at us to see who could hold on the longest. We LOVED it. This is middle class suburban bad-ass-ery at its finest.

My dad’s legendary status goes beyond the athletic fields, but I don’t want to get into too many Grandpa Dan stories today. We have time for that to unfold.

I will leave you with one gem, though. When Nolan was a newborn my dad wrote him a song. You can see Grandpa Dan perform it by clicking on this link: “The Nolan Song“. 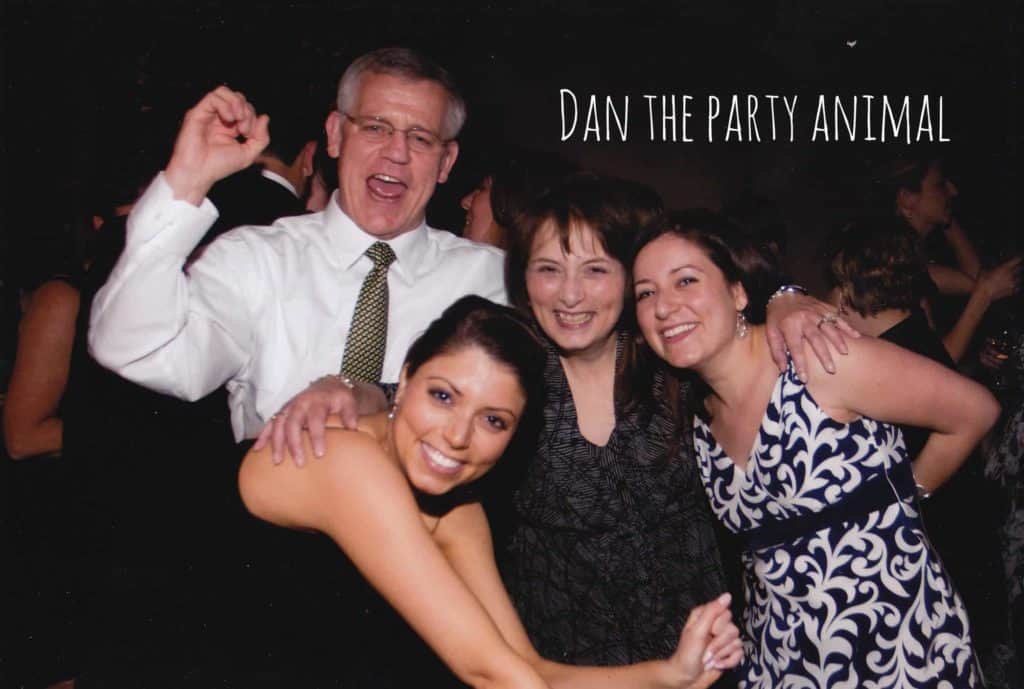