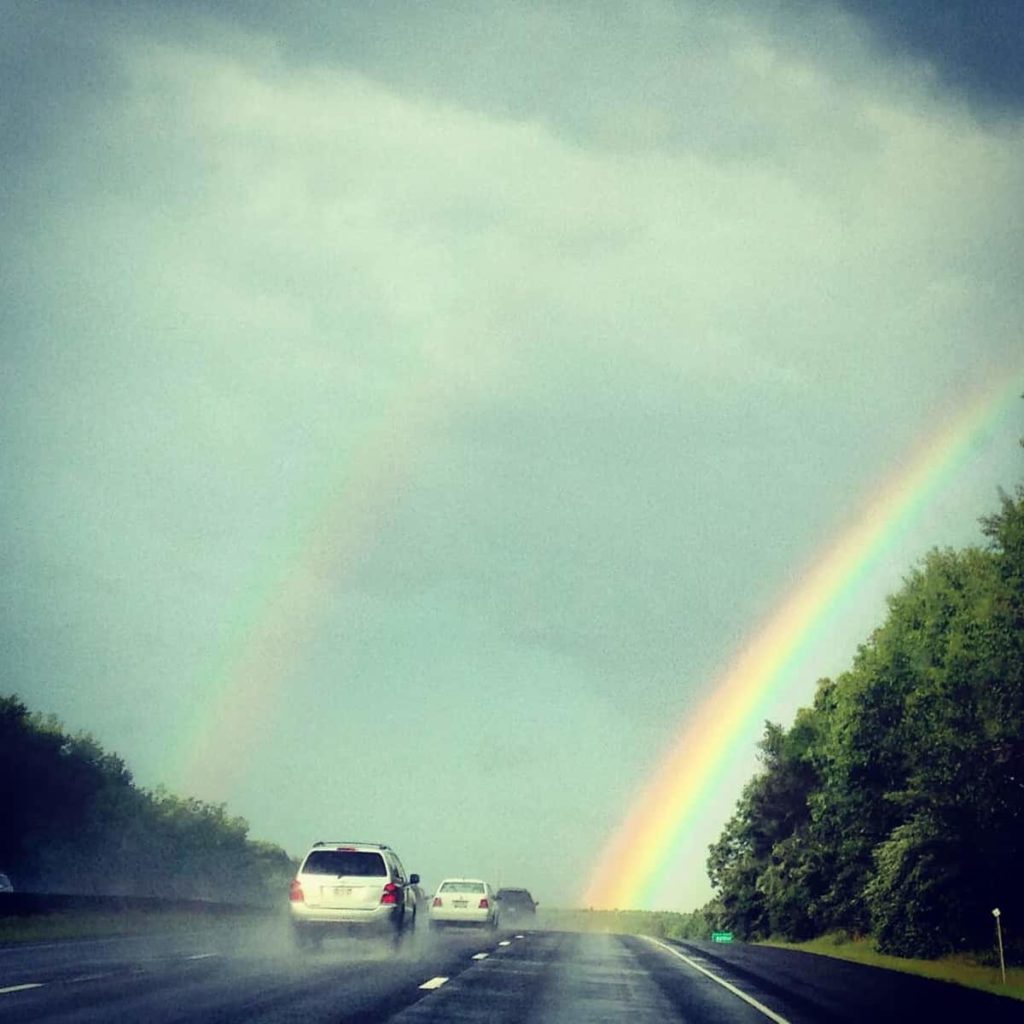 There are no days on the road. Time is measured differently during travel: in minutes spent in the car between point A and point B. In the number of bathroom breaks you make on the highway. In individual moments. In meals.

If you’re traveling on the New Jersey Turnpike with a baby, it is also measured in the number of times you and your child simultaneously burst into tears upon realizing that the left lane is closed, that you’re running out of gas, and that the gridlock extends so far in front of you that you’re pretty sure you are looking at infinity. You cannot be entirely sure that your infant is crying for these reasons, but you are certain that you are. 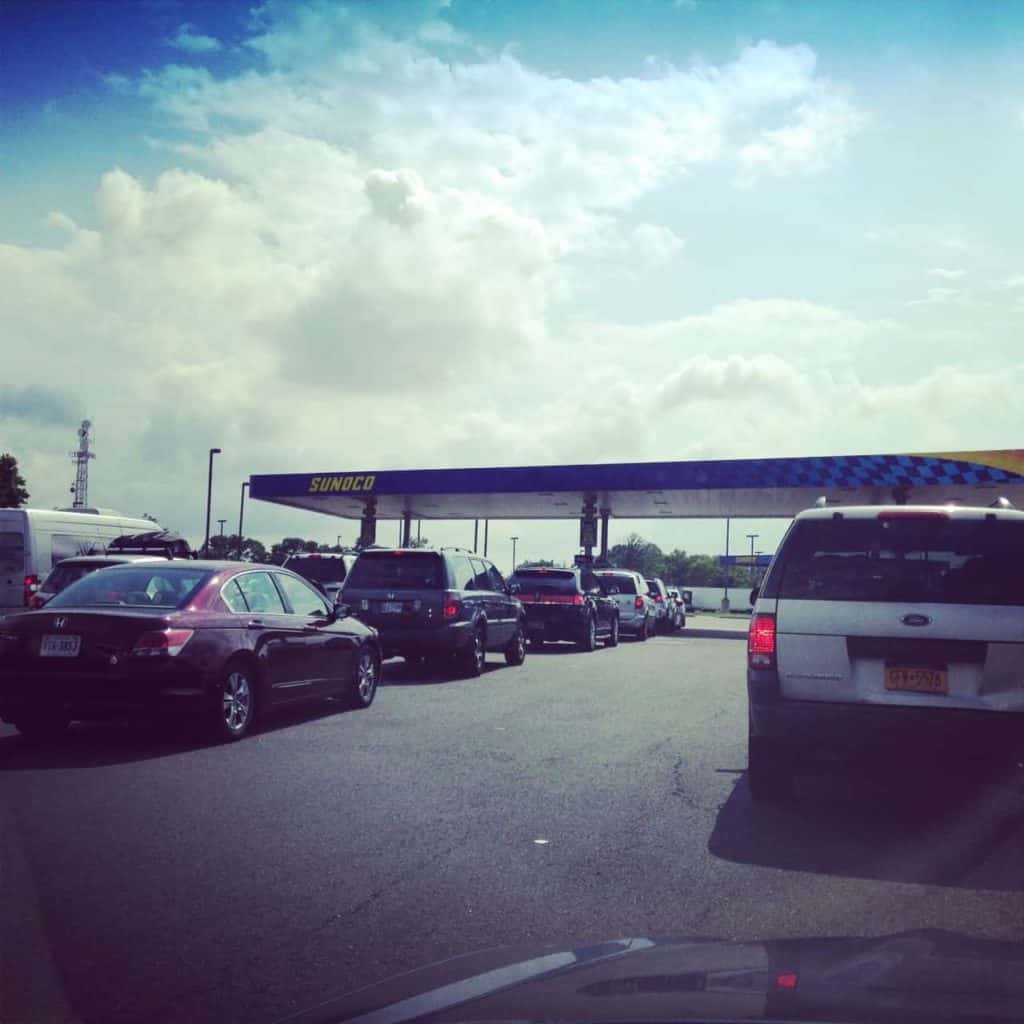 Let me back up. On Saturday, Nolan and I took off for a road trip to Maryland, just the two of us. This was ambitious, coming from Boston and without the backup of a second adult. But Brian couldn’t get Monday off, and Nolan’s adventurous. It was an important trip to make, for a Celebration of Life service after the passing of my good friend’s mother, Marijke. I didn’t want to miss it, and couldn’t afford to fly, so Nolan and I packed 10,000 tons of crap into the Subaru and hit the road. We fancied ourselves a modern day Kerouac and Ginsberg, but with less drugs and more diapers. 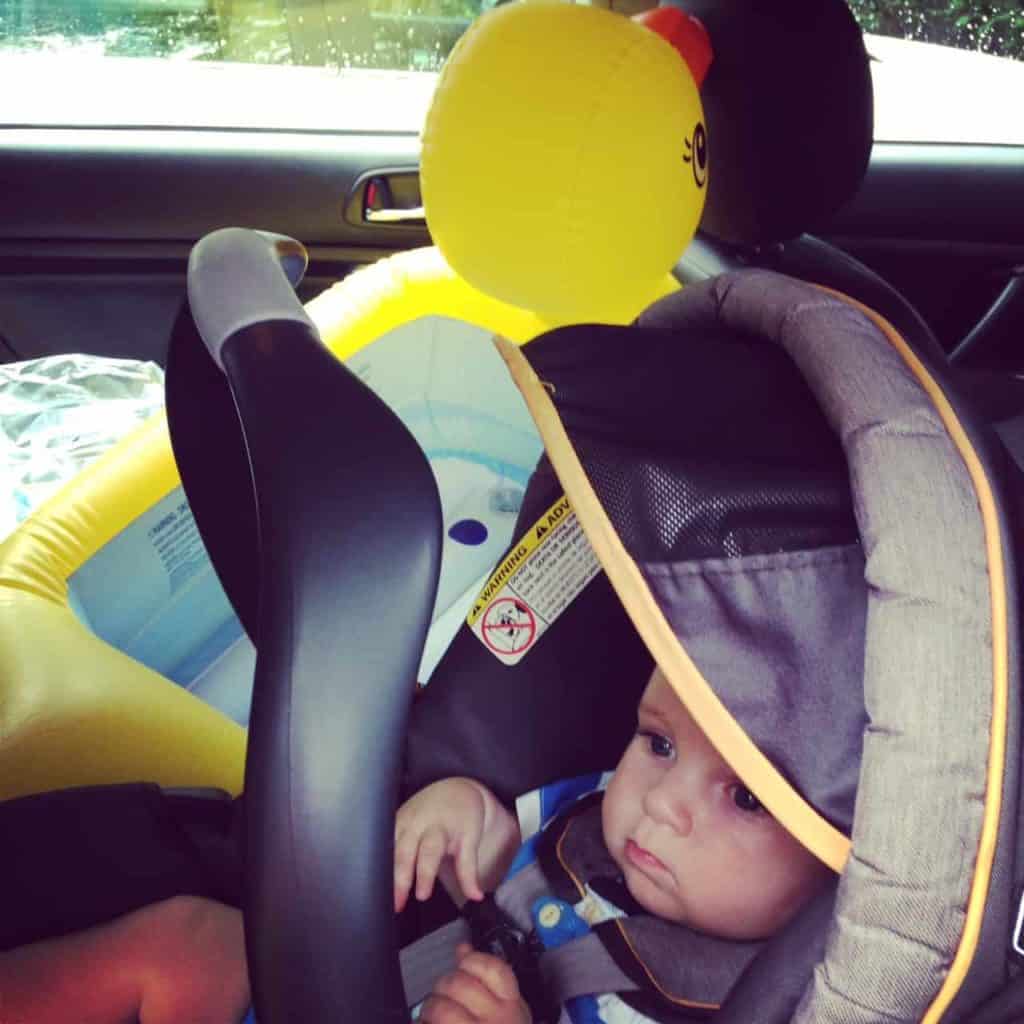 Why yes, that is an inflatable duck tub in the backseat.

In a way, long trips seem to appeal to Nolan’s sense of sloth. This is a kid who doesn’t like to exert himself, and when can you exert yourself less than on a road trip, if you’re the helpless passenger? Hardly ever. In many ways little Nolie was the perfect travel companion.

However, it might surprise you to hear this, but there are some conversational strains, if you will, when it comes to making chitchat with your baby during a 12 hour car ride. Ahem. It’s true that Nolan is a delight, and quite possibly will become one of the greatest minds known to mankind (as we like to say in our house, “He’s no athlete, he’s a mathlete!”). But. His current conversational skills are on par with a duck. Or a nectarine. Or something else that is hard to converse with. He is not, at this time, a dazzling verbal companion. 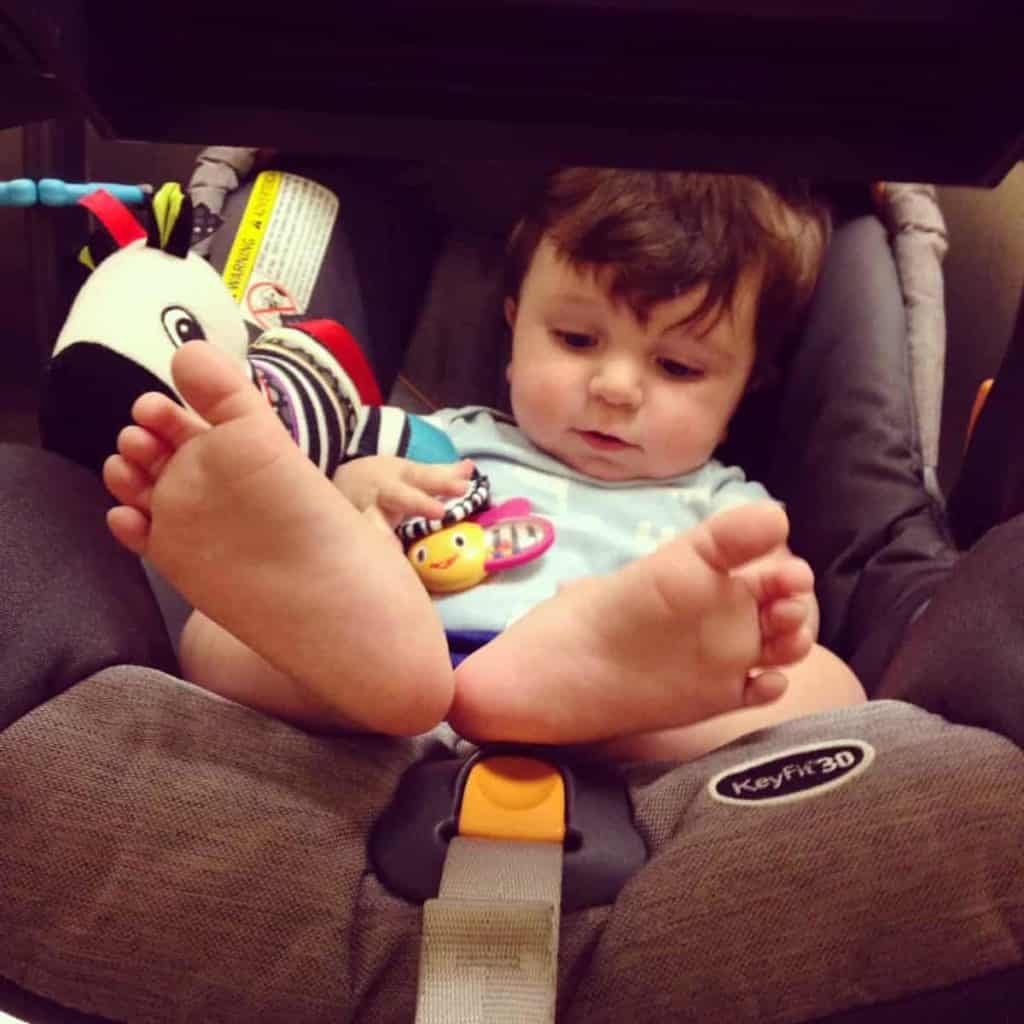 He can’t keep up a conversation, but he sure likes his toes!

Since Nolan couldn’t be counted on for a good old fashioned debate, and since there are only so many times I can blow bubbles while making a vibrating sound with my lips, I had to look elsewhere for entertainment. And that somewhere was Ira Glass on This American Life. Ira promptly puts Nolan (and many adults) to sleep, but I love him. The fact that he puts Nolan to sleep is just a bonus.

This American Life is a radio show that picks a topic each week and tells a few stories on that topic in “Acts.” It’s informative and great. What is not great? Having your iPhone app randomly (but regularly!) get midway through an act and then spontaneously cycle back to the start of the show. This happened again and again and again. I thought I was going to lose my mind. I would get totally engaged in a story, and then BAM! Right back to Ira’s goddamn intro.

It was a pretty long trip.

To understand the impetus to make the trip in the first place, you’d have to know a little bit about Marijke (Marijke’s daughter, Adriana (Adzy), was my grad school roommate in NY, and one of my favorite people anywhere). Marijke was a powerhouse of a life force, a woman whose presence would fill a room but, rather than leaving little space for you in it alongside her, would somehow make YOU fill the room, too. She was larger than life, and with her, you were as well. She was funny and irreverent and smart smart smart. Her daughters are the same way.

I had no particular plan with Adzy for the night before the service, but I knew, with certainty, that showing up at her parents’ house (“The Casa Azul”), would not be an imposition. I knew that, like me, many others would come in to see the family, and that there would be festivities both despite of and because of the difficult circumstances. A long table was set up outside the Casa Azul, ready for whoever might stop by, lit with candles and full of food.

This, I thought, this is a family that knows how to live.

As welcomed as we were at the Casa Azul, Nolan and I had other lodging for the night, with my college roommate Nancy and her husband Mac. Nancy and Mac are expecting twins in the fall. Like, a kid x 2. That’s double the amount of kids I have. Despite the fact that she is busy preparing to birth a duo, Nancy is a thoughtful hostess, and had a sign waiting for us as we arrived: 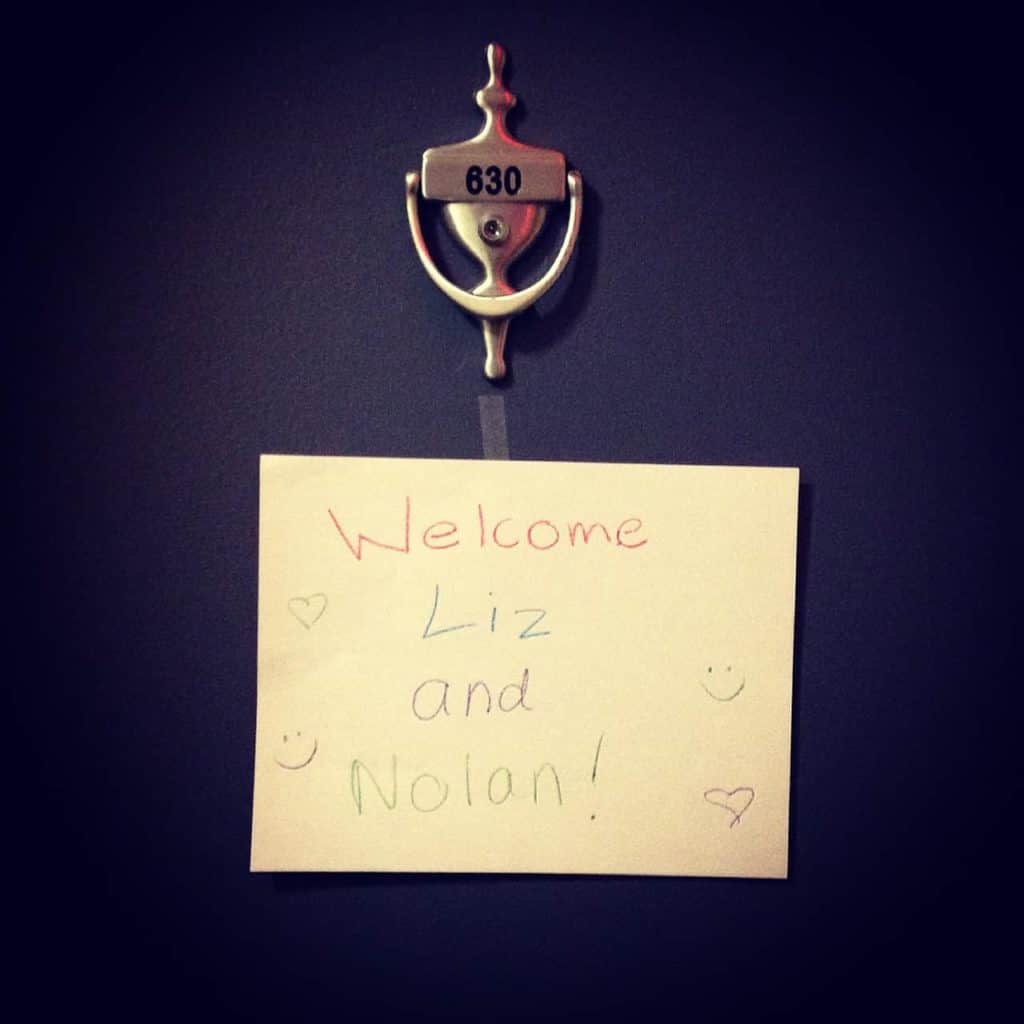 Nolan slept remarkably well in unfamiliar surroundings, and decided to celebrate by getting up at 5:00 a.m. to roll around the floor, no semblance of crawling whatsoever. Watching Nolan splayed out, gently peddling his legs, he reminded me of a gym-goer who “exercises” by using the stationary bike with the resistance set to zero, in comparison to everyone around him who is running on the treadmill at an incline.

By the time our hosts got up at 9:00 a.m. Nolan had already worked out, eaten, played with his toys, and finished his first nap for the day. I would have been jealous of Nancy sleeping until 9:00, but did I mention the part about her having twins soon? She should sleep now.

Nolan had to bathe for the services, and we decided to try the sink. The inflatable duck tub was still in the car and, let’s be honest, I was too lazy to retrieve it. The sink bath went amazingly well, except for the few seconds when I heard what I thought was the garbage disposal and feared that I was about to puree my son’s privates. Although he didn’t explicitly ask me NOT to do that on the trip, I’m pretty sure Brian was hoping I’d keep all of our son’s bits as they were. 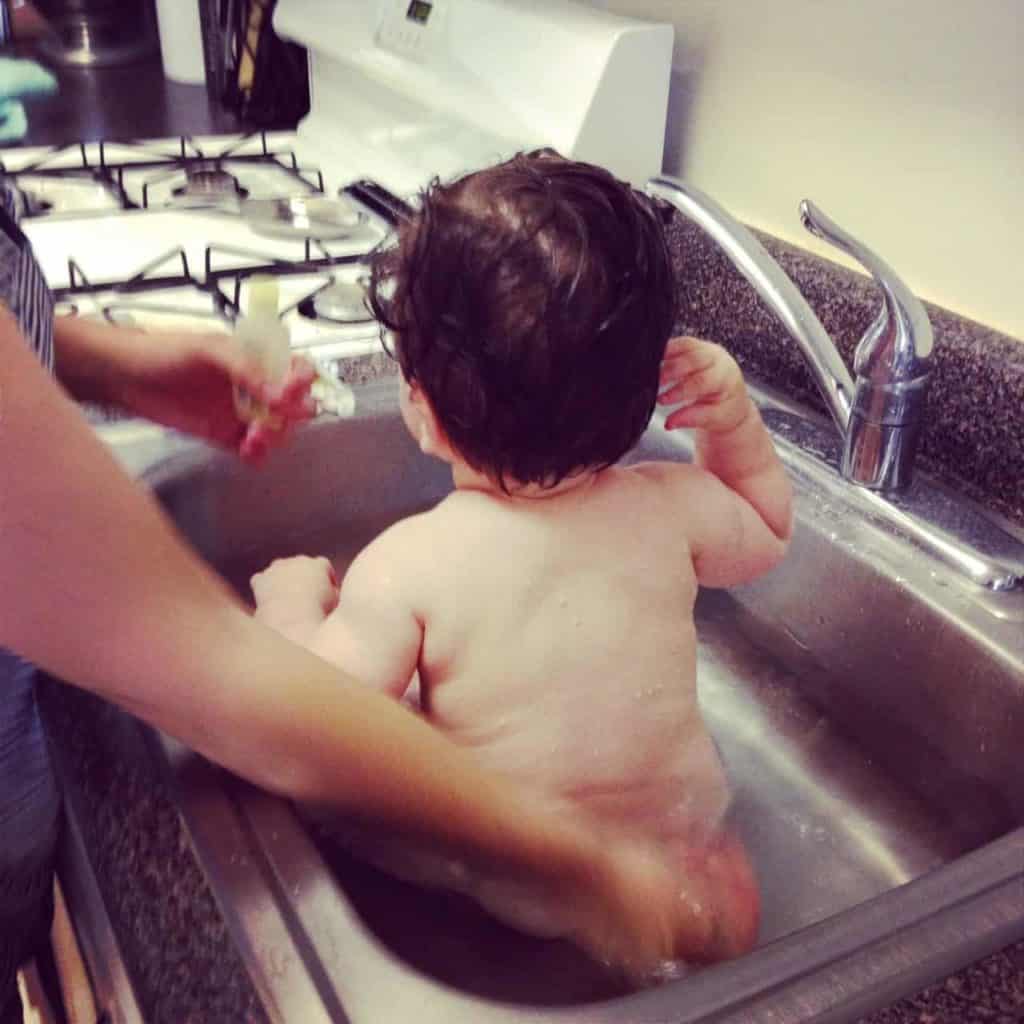 We made it to the Celebration of Life, clean and genitals intact. The service was amazing: funny and irreverent, like Marijke herself. Family and friends shared MMM’s (Marvelous Marijke Moments). The time she was in a hotel room in Greece, and could see the Parthenon from her window. Marijke wanted a better view, so she rearranged the furniture so that her bed faced directly out the window, with the Parthenon displayed for her fully when she awoke. The way that, if you mentioned that you liked something she was wearing (an earring, a scarf, a skirt, even), she would take it off and offer it to you on the spot.

This, I thought, this was a woman that knew how to live.

I especially enjoyed it when Marijke’s sister-in-law got up to speak, with her two tall and gorgeous adult daughters, Muna and Dalia, standing alongside her. Marijke had encouraged her sister-in-law to breastfeed, some 30+ years ago, when she was not sure she would be able to do so. She succeeded, and brought up her super attractive girls to show as proof of the stellar results of breastfeeding. Ha! Amazing. I was actually nursing Nolan at the back of the room during this tribute/demo, and as I looked down at him I hoped that he, too, would one day become a beautiful, tall woman. Wait, what? 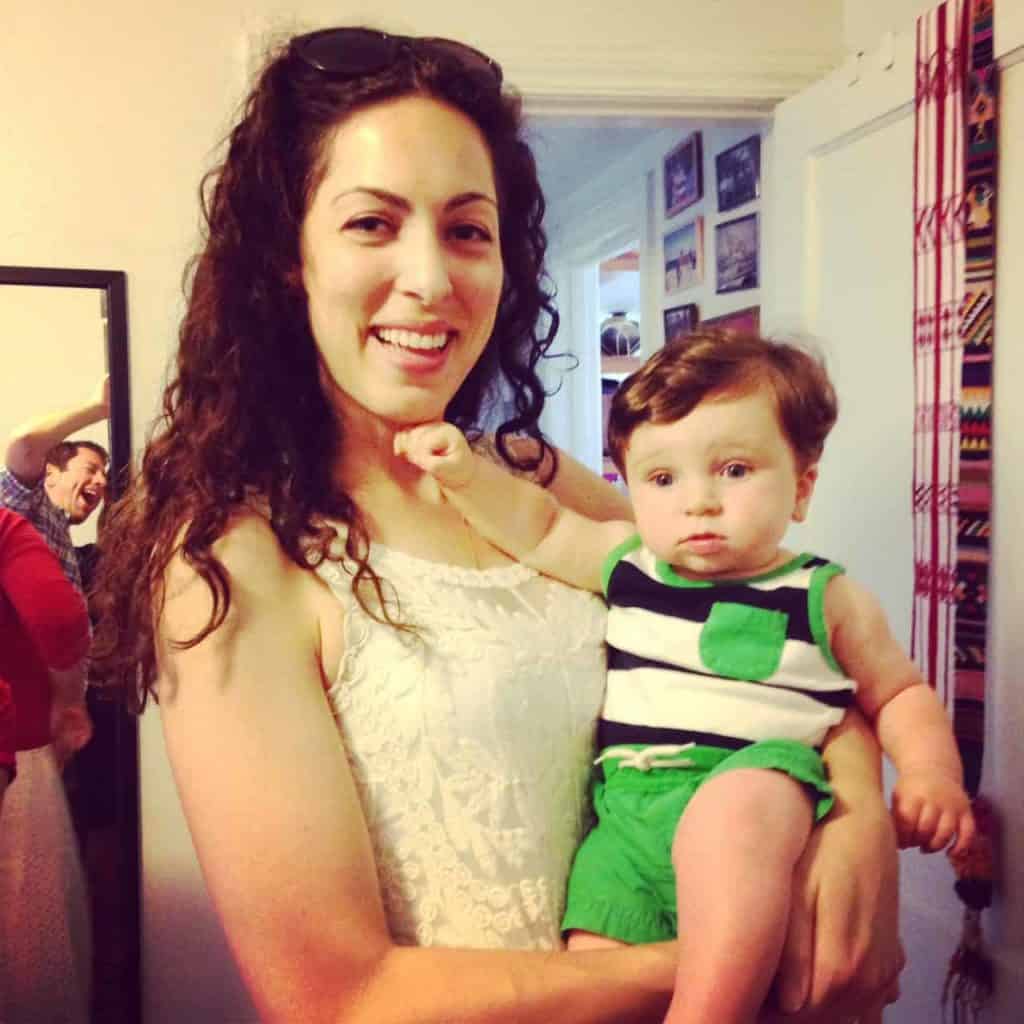 Nolan and Muna, both products of breastfeeding. Individual results may vary.

Seeing Adzy and her family was well worth the stress of the NJ Turnpike, and of Ira Glass on repeat. Nolan and I headed toward home by way of Havre de Grace, where we stayed with my friends Christina and Mike, and their baby Aaron. 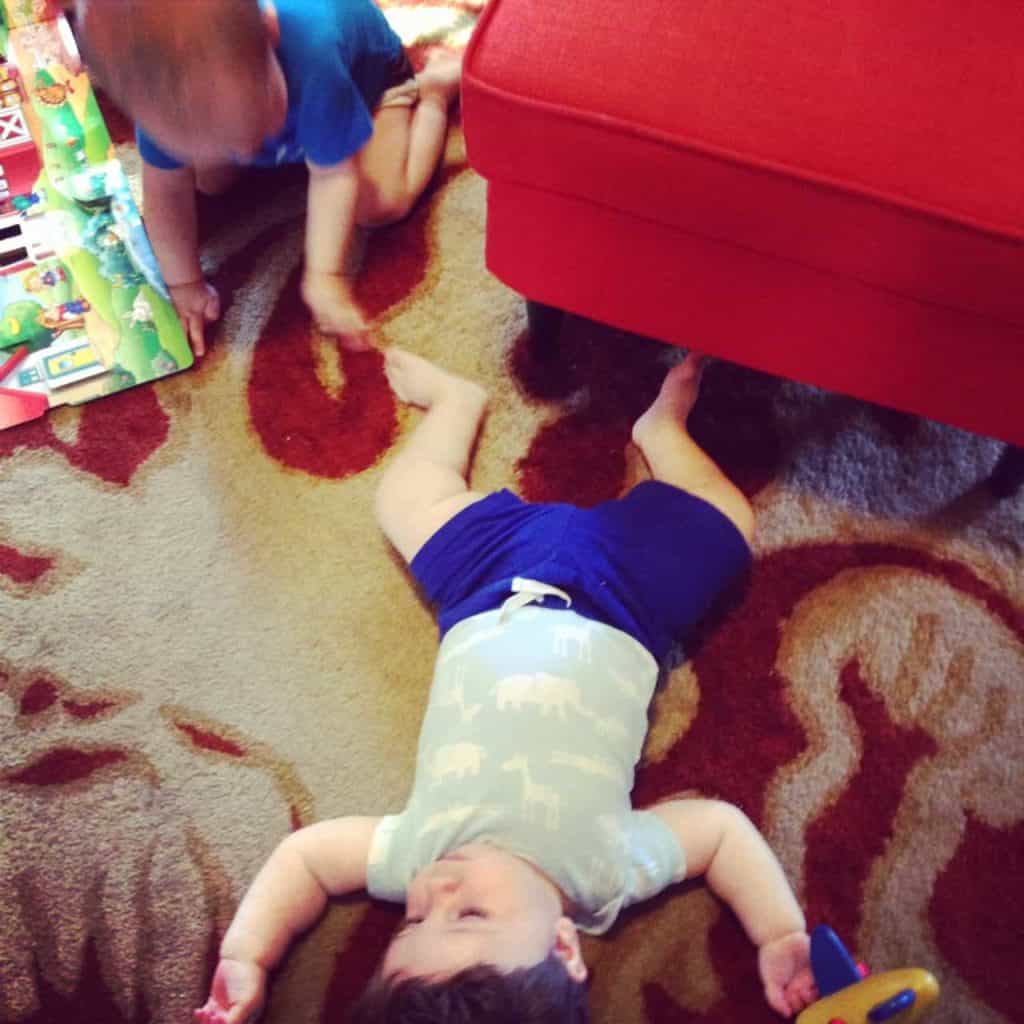 I tried to tell Nolan to stop being so submissive with Aaron, but he didn’t seem to totally get what I was saying. 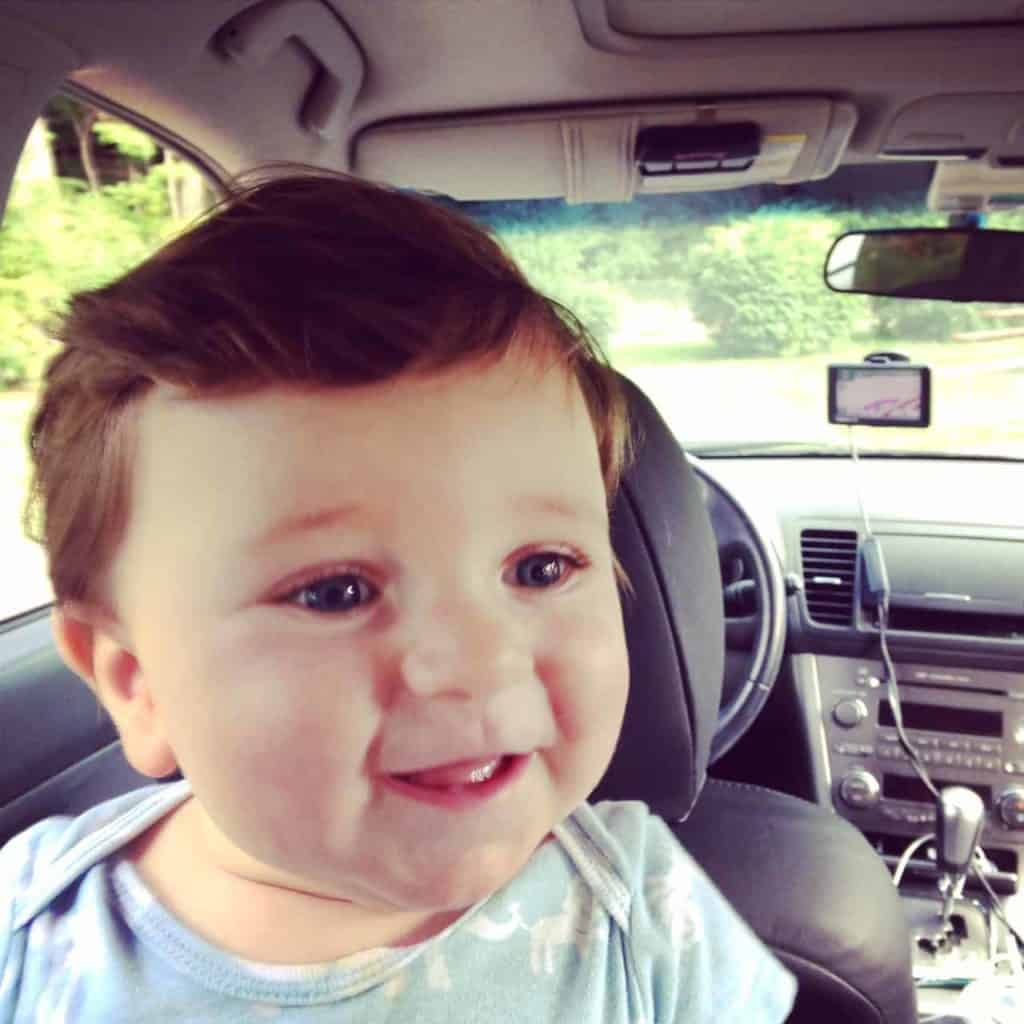 Nolan made for a very cheerful travel companion, especially given that when this photo was taken I believe he may have been sitting in his own feces for a hundred or so miles. 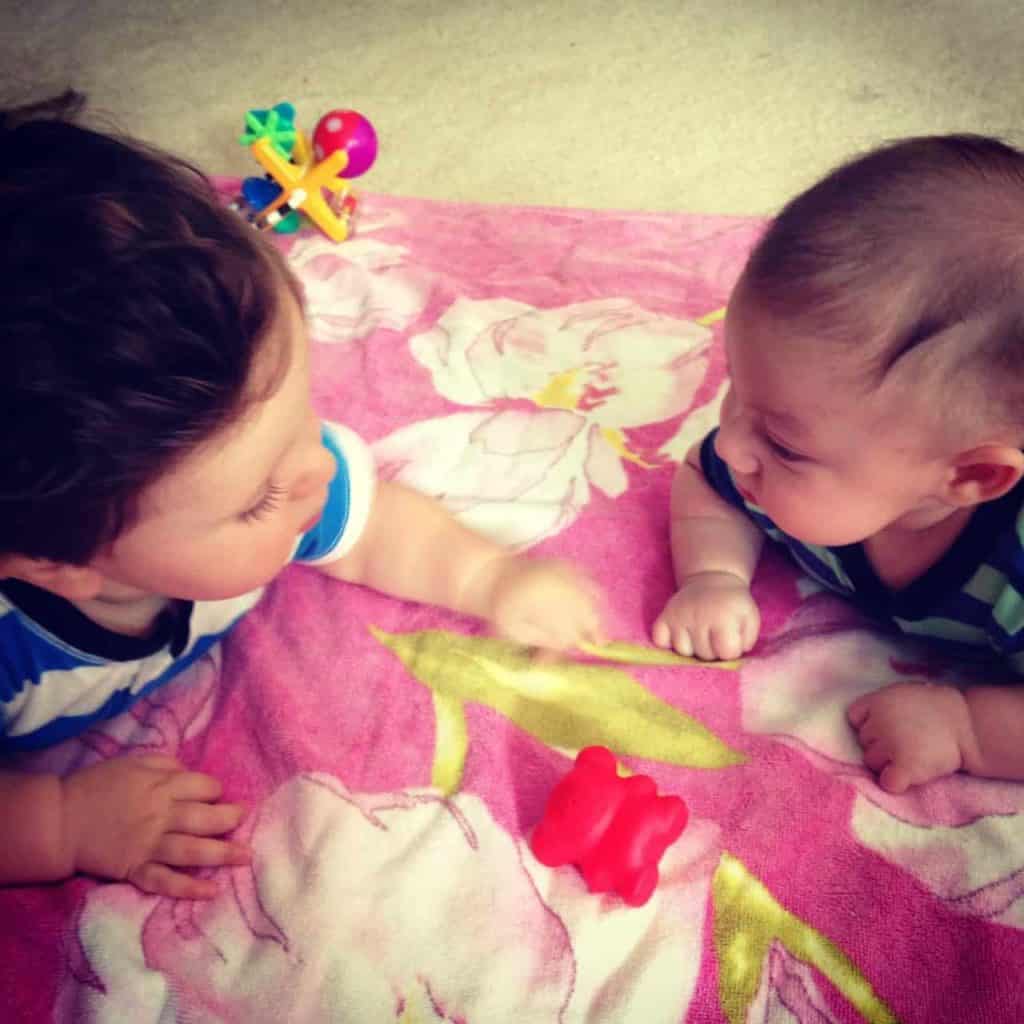 Nolan visiting with his cousin Kyle, at another of our many stops to break up the endless drive. 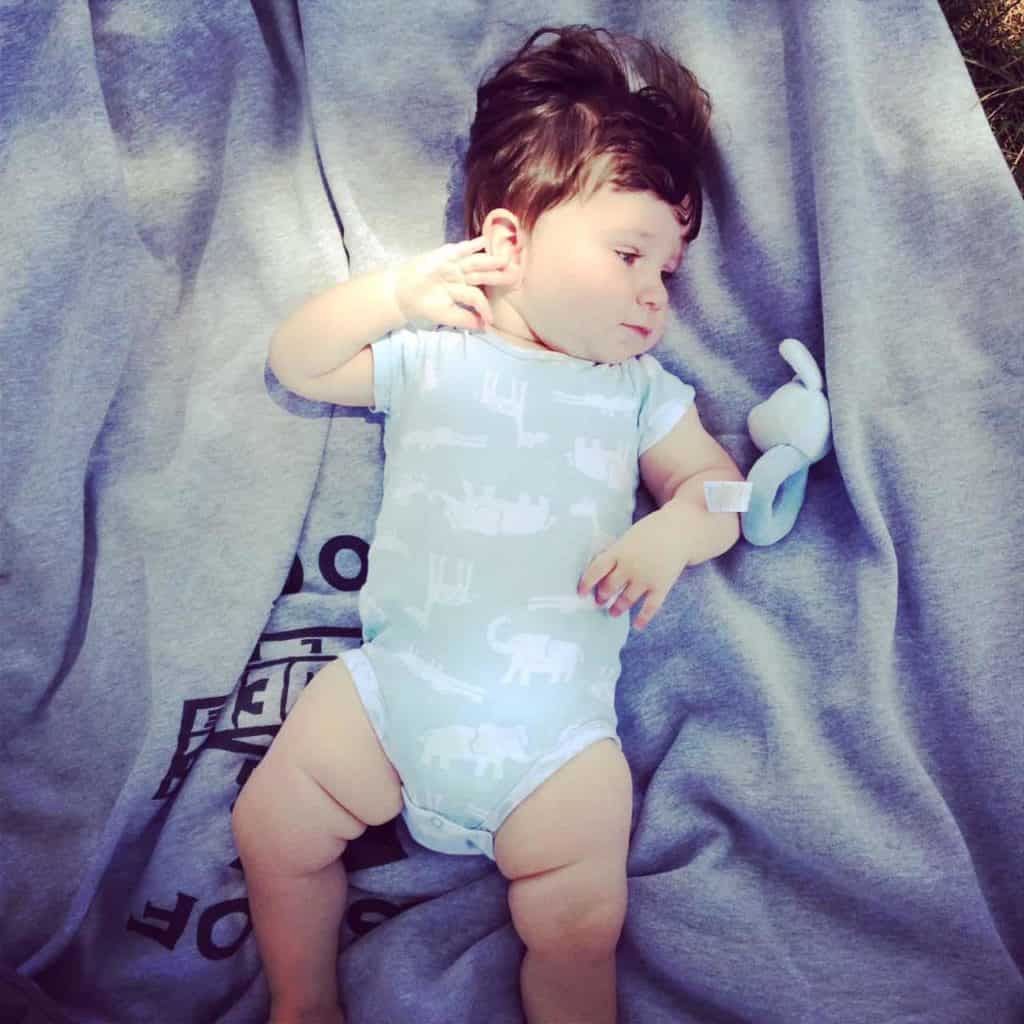 Workin’ it at the rest stop.

The ride home was strangely pleasant. There was no turnpike traffic to battle this time, and the weather was the type of spectacular where you have just missed a storm, and all that remains is the serene aftermath. Up ahead of us, in view for a solid 10 minutes, was a double rainbow, somewhere in Connecticut I think. It was extraordinary and vibrant and unusual. It reminded me of Marijke. 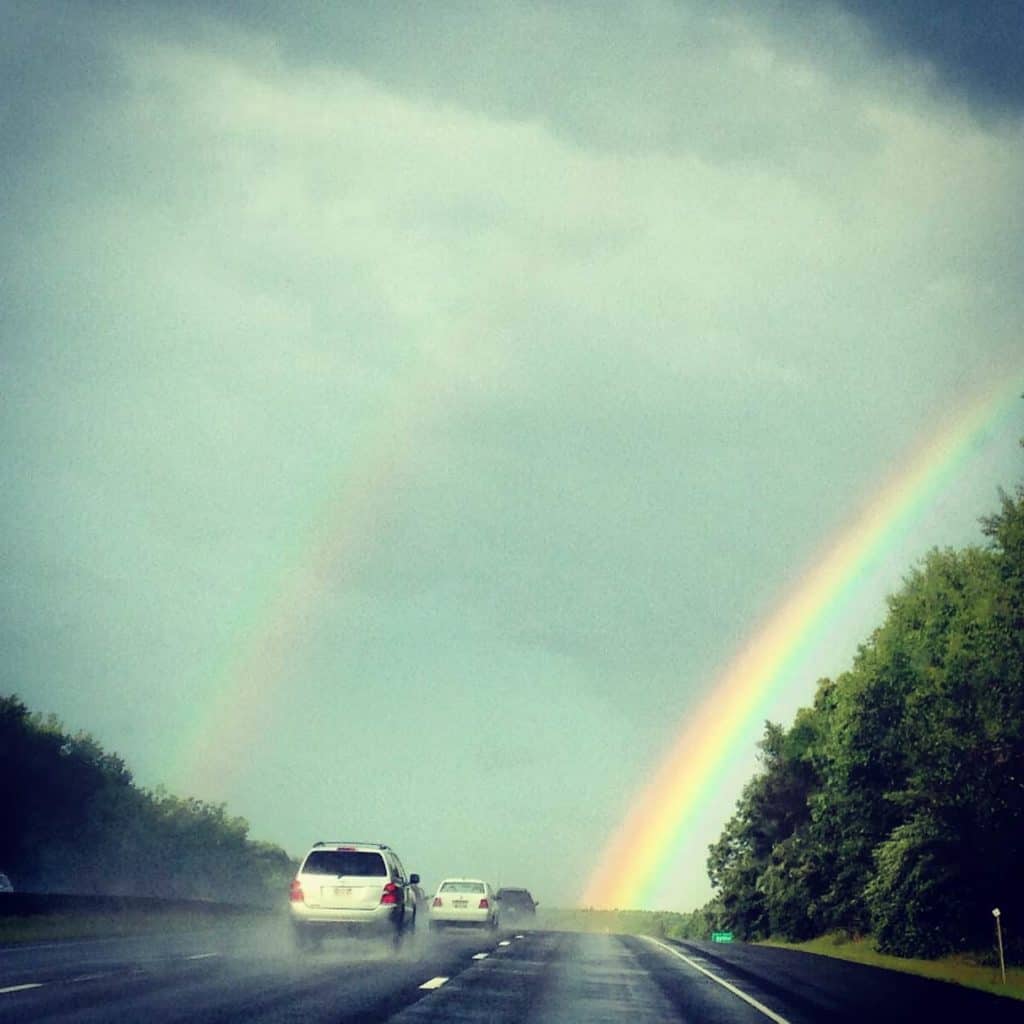 Today is Wednesday. We are off the road, Nolan and I. We’re back at home, where days delineate something more concrete again. Where time means what it always meant. It’s nice to be back. And it’s nice to look back, in your rearview mirror once in awhile, and recall what it’s like when time is measured differently. 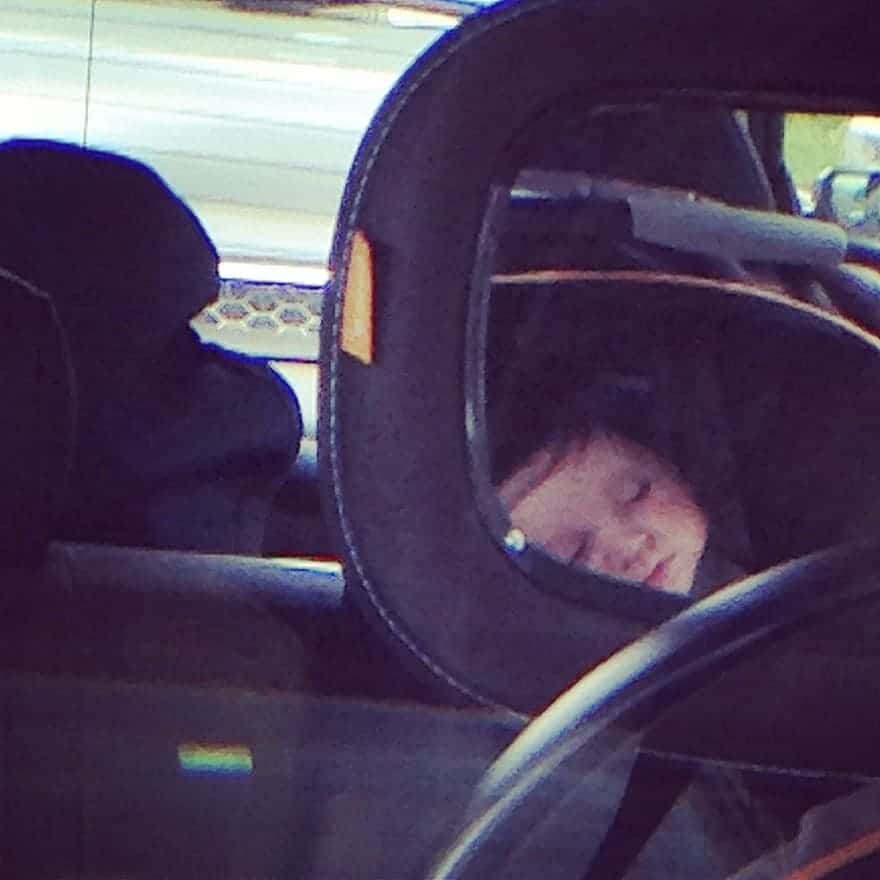