×
You are here: Home / All Posts / The Friday Five (Things I Love This Week) 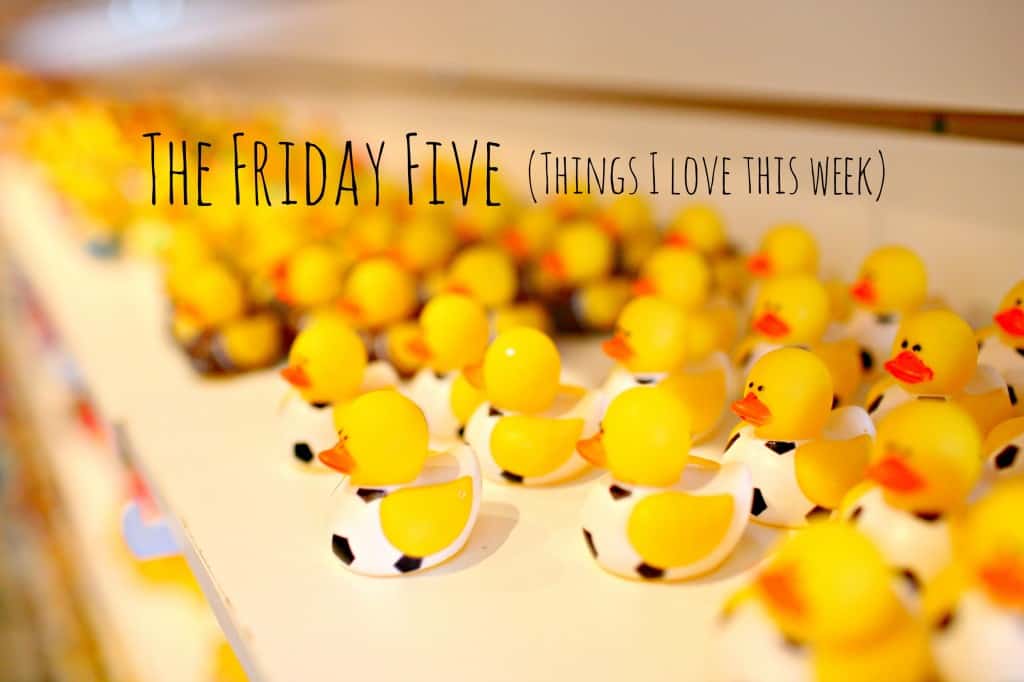 Today I’m trying out a new feature on the blog. It may become a regular feature if it becomes wildly popular, leading Nolan, Brian and me to riches beyond our imagining. I find it’s better to set up lower expectations, though, and so just becoming moderately wealthy would be reward enough for us. Like high/upper middle class wealthy at LEAST. That will cut it. I’d like some fancy home renovations, all I’m sayin’.

Ok, here’s the idea: Every Friday (or most Fridays, because I have a commitment issue here), I will post about 5 things that I’ve enjoyed this week. The category of “things” is loose (see above sentence on commitment issues). It could be products I’ve found for Nolan, a good book, an activity, a person, whatever. Who knows where the wind will take us folks. So, without further ado…

Ok, this thing is the man. I mean the duck. It’s the Howard The Duck of inflatable tubs. For the past month or so it’s been super hard to bathe Nolan in his infant tub (we had been using the Fisher-Price Precious Planet Whale of a Tub

). The whale tub was great when Nolan was smaller, especially because it allowed him to recline back, which helped us to wash his luxurious hair in a spa-like setting. You have to use your imagination for the spa-like part.

As Nolan’s gotten bigger and more, ahem, “active” it’s been harder for me to manage him during baths. I think he might have gotten so inspired at swim lessons that he wants to practice his breast stroke while I’m more interested in cleaning the table scraps from behind his ears. Sometimes we are not on the same page, Nolie and me.

But then along came the duck tub and turned things around for us, as only an inflated duck can do. Because it’s inflated Nolan can bounce right off the sides with no repercussions. He can sit up straight and read his books. Now, at ten months, this thing has been a lifesaver. 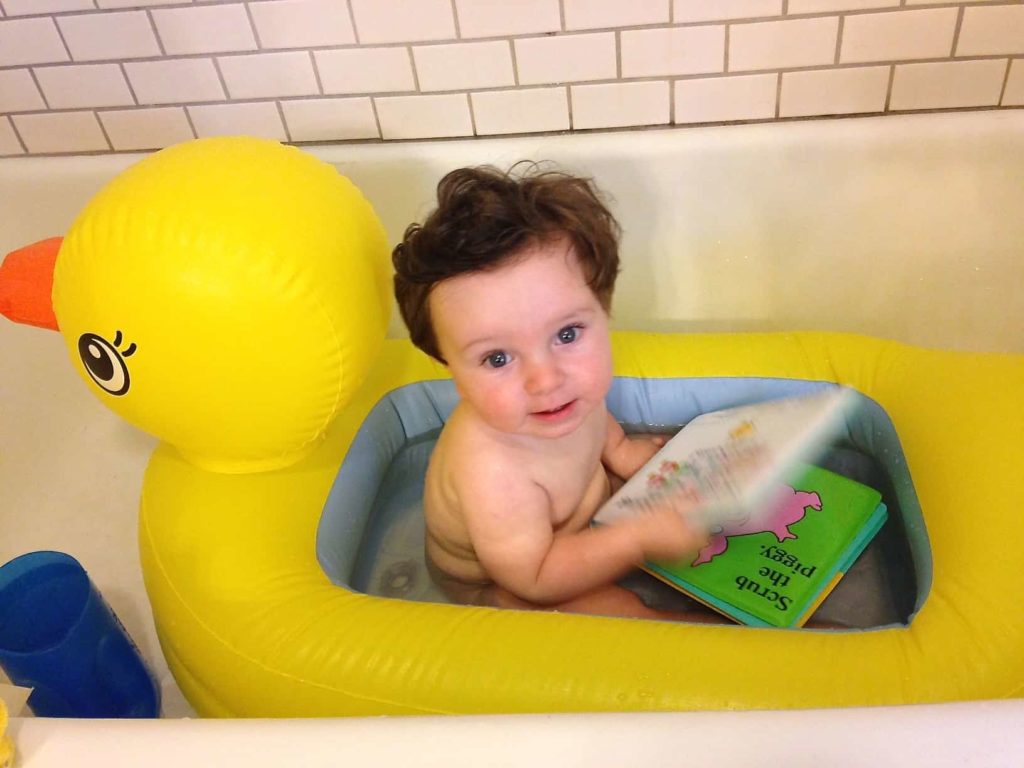 We’re training Nolan early-on to multi-task in the bathroom. For now he’s reading in the tub, but someday he’ll be checking his emails on the toilet like the rest of us.

This one really got me: It’s a post by Leslie Kendall Dye of the blog Hungry Little Animal called “The Timer“, and it looks at how our dreams for the future are an important piece of enjoying the present. I can put it on this list even though it’s not a humor piece because remember, there are no rules to this list. It’s anarchy over here on my laptop. Plus, the post is beautifully written and it captured a feeling that rings true for this particular time in my life, and I suspect in the lives of many people who read this blog.

“Time has a way of expanding and contracting while you watch your child grow. When we lie in the dark after her nap, after she summons me for that afternoon cuddle, time expands and I exhale in the darkness.” – Leslie Kendall Dye

This is a show about a hot lady, Nicole Curtis, who takes horribly run down houses, mostly in Detroit, and restores them to their former glory. I know TV uses fancy tricks like “editing”, but from what I can tell Nicole Curtis does much of the restoration herself. She is a total hot badass. And, I mean, the tagline pretty much sums things up:

“Nicole gives condemned houses a second chance on Rehab Addict — and she looks great doing it!” 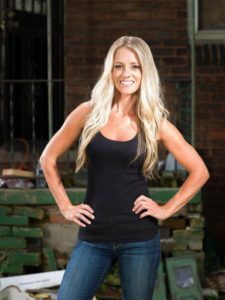 Nicole Curtis, who I think we can all agree looks a bit like Nicole Eggert from “Charles in Charge.”

This makes me want to have my own tagline. Something like: “Liz births babies like nobody’s business on her hit show A Mothership Down– and she looks great doing it!”

I’m especially taken with Nicole Curtis, but I’ve been really into home design shows in general. Last year Brian and I moved into an 1890’s Victorian house in need of some work. We’ve done a lot in the past year, but now we’re considering some signifiant renovations to the first floor and backyard, which excites me greatly. You see, I am of the mind that anything is possible in home design. I can see a dilapidated mobile home and easily imagine transforming it into a glorious Colonial. Brian does not quite see things the same way, because he takes into account items like “measurements” and “finances” and “gravity” when planning our projects. 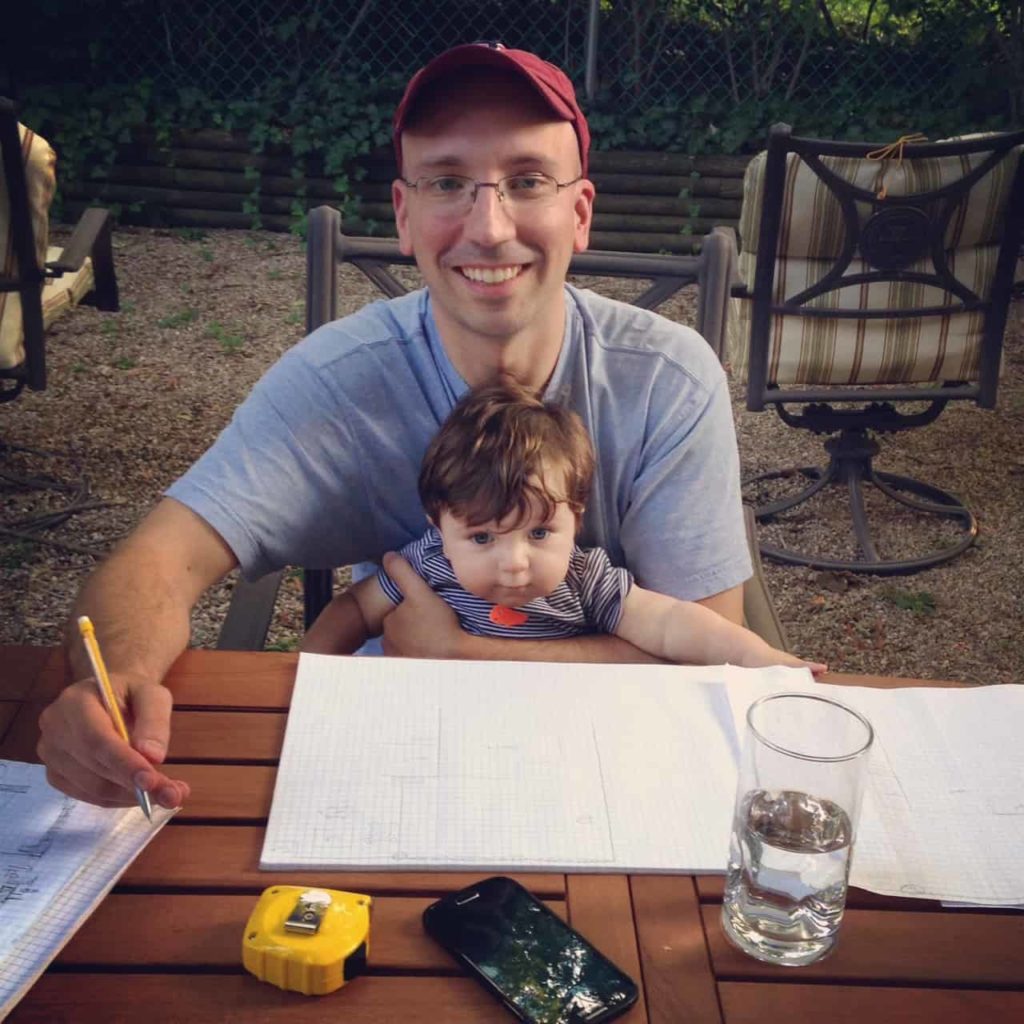 Brian and Nolan, hard at work.

As you can see, Nolan and Brian are working hard to craft a design for our yard. You know that they are working hard because there is graph paper on the table, and also a measuring tape on standby. This is how designers work, people. They measure the shit out of things.

If you’re planning your own renovation, or just like to look at hot ladies doing manual labor, check out Rehab Addict.

This is an adorable way to decorate a nursery, or an office, or a bathroom (not a bathroom, actually). It’s simple and kind of haphazard looking, which I like. I did it in Nolan’s room. 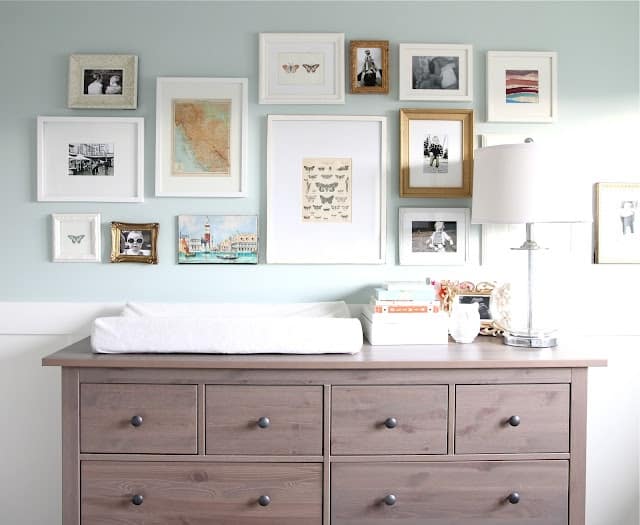 I was very happy with the result in Nolan’s room, although, as Brian likes to say, “If those walls could talk, they would say ‘ouch’.” That Brian, he likes some gentle comedy. 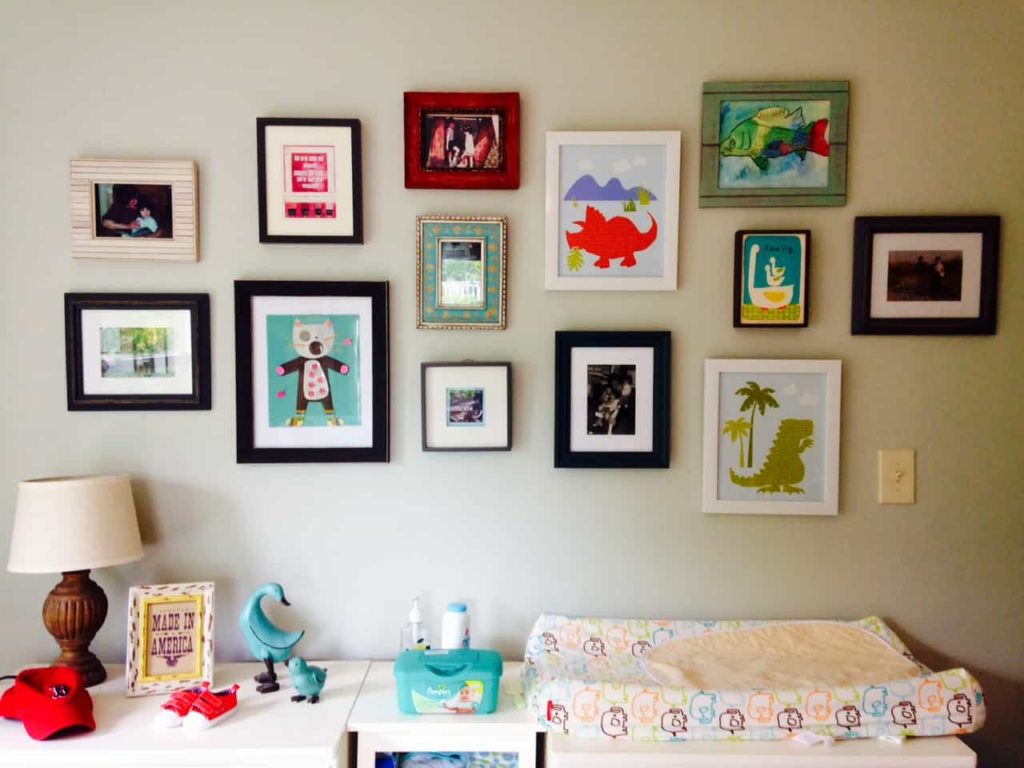 and have been very happy with it). It’s time to move on up to a larger seat, and it’s occurring to me that this means that we can no longer use the Chicco Keyfit Caddy Stroller. That right there is a huge hit, because unless someone knows some magic that I’m missing here, now every time we do errands and Nolan is asleep in the car I’ll have to wake him up to move him to a stroller instead of throwing his car seat into the clicky stroller. No good.

But, since Nolan doesn’t appear to be getting any smaller, we sucked it up and bought a new lightweight stroller, the UppaBaby G-Lite. 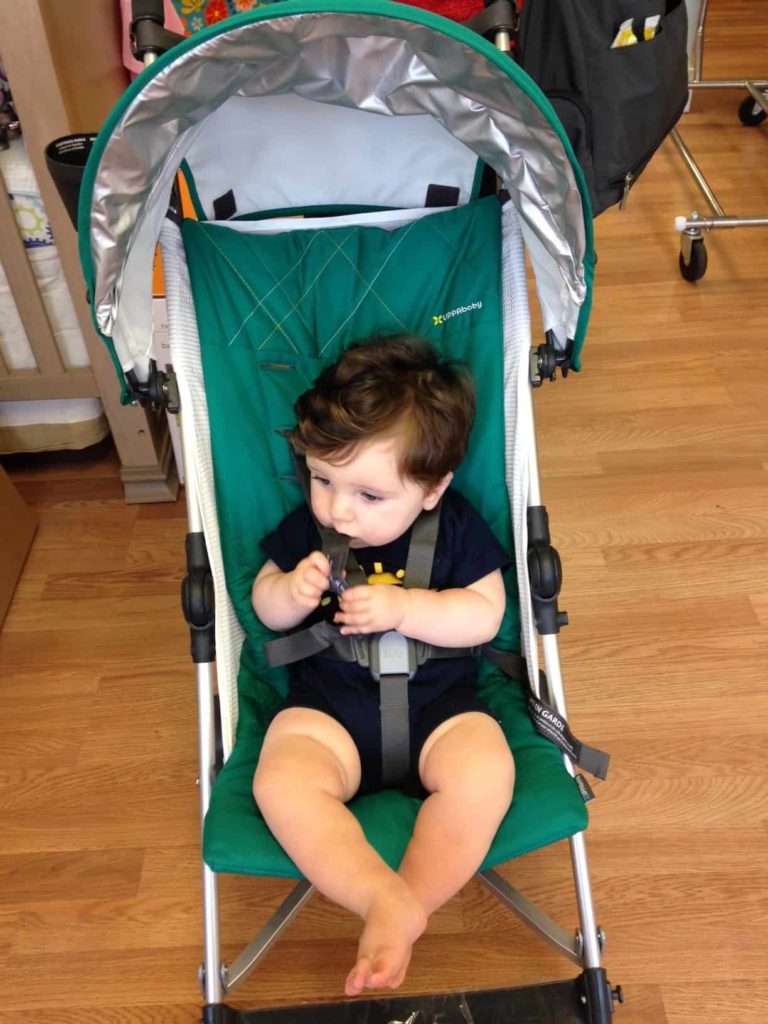 Here’s Nolan testing it out. He started to eat the strap immediately, which is his version of a dog peeing on a tree to mark his territory.

So far so good. It’s super light, reasonably priced, and it looks snazzy. Also it folds into roughly the size of an umbrella. I *think* that is why they call these “umbrella strollers” which is only just now dawning on me as I type this. I mean, it’s doubtful that anyone uses the stroller AS an umbrella, right?

Anyway, the stroller, while not good for hard core walks, is definitely handy for errands. I still use baby carriers for Nolan but let’s be honest, sometimes you don’t want your baby directly up in your grill.

And that concludes this first ever edition of The Friday Five. I will be watching my bank account closely this weekend to see if I have become very rich from this post. Oh, and please – if you have any items that you think are hidden treasures that you want to unhide and share with the rest of us, leave it in the comments!