×
You are here: Home / All Posts / The Toughest Thing About Parenting (So Far) 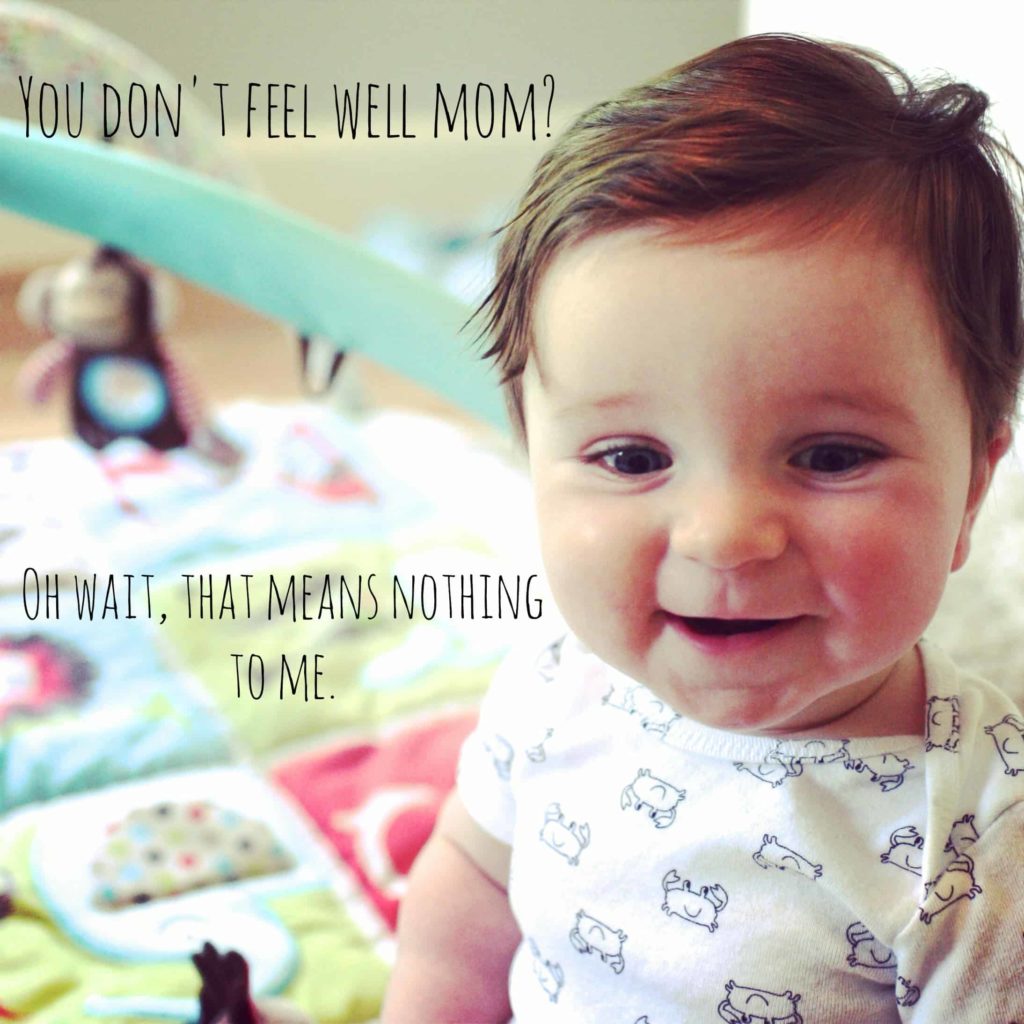 Guys, I was sick all weekend. And you know who didn’t care? Nolan. Not one bit. Not. At. All. I know he looks like he feels kind of bad for me in this photo: 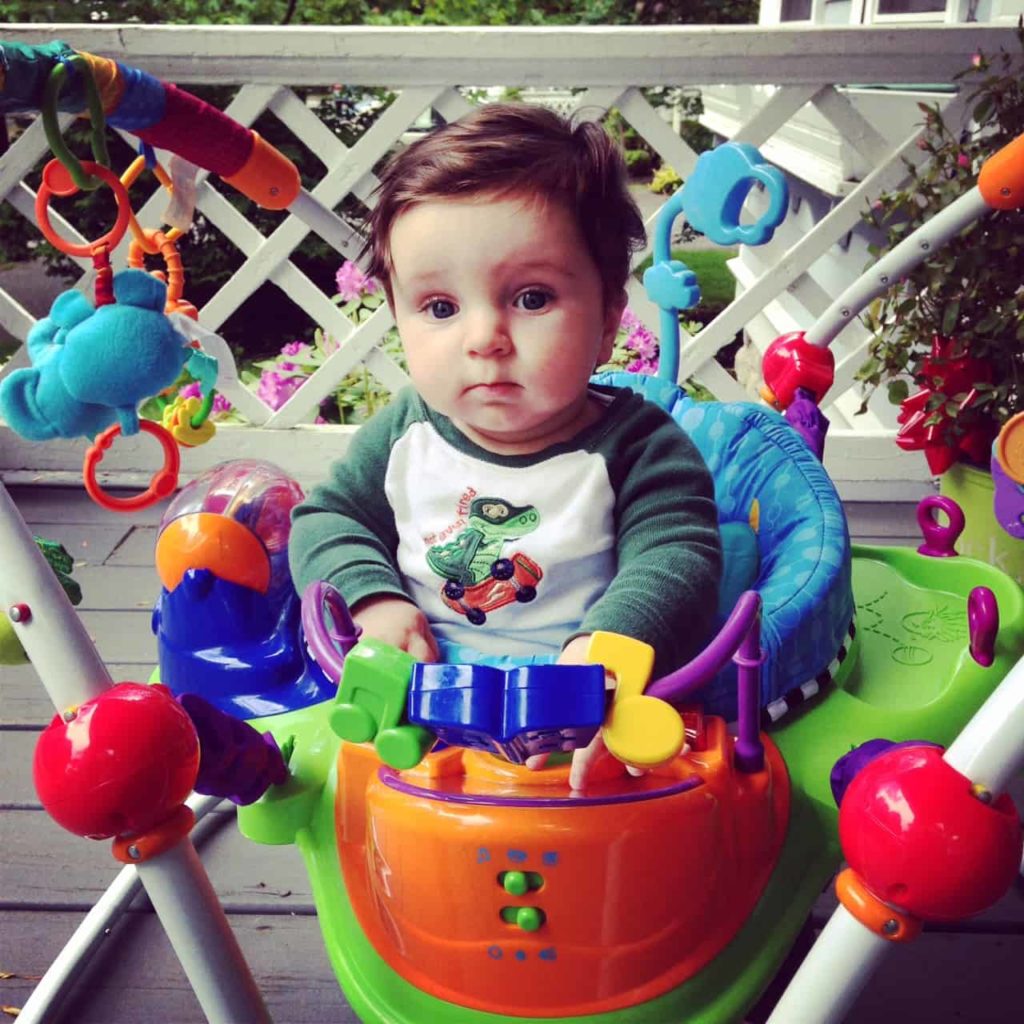 Don’t let him fool you. He’s been partying for days even though he knew I could’t keep up, as evidenced here: 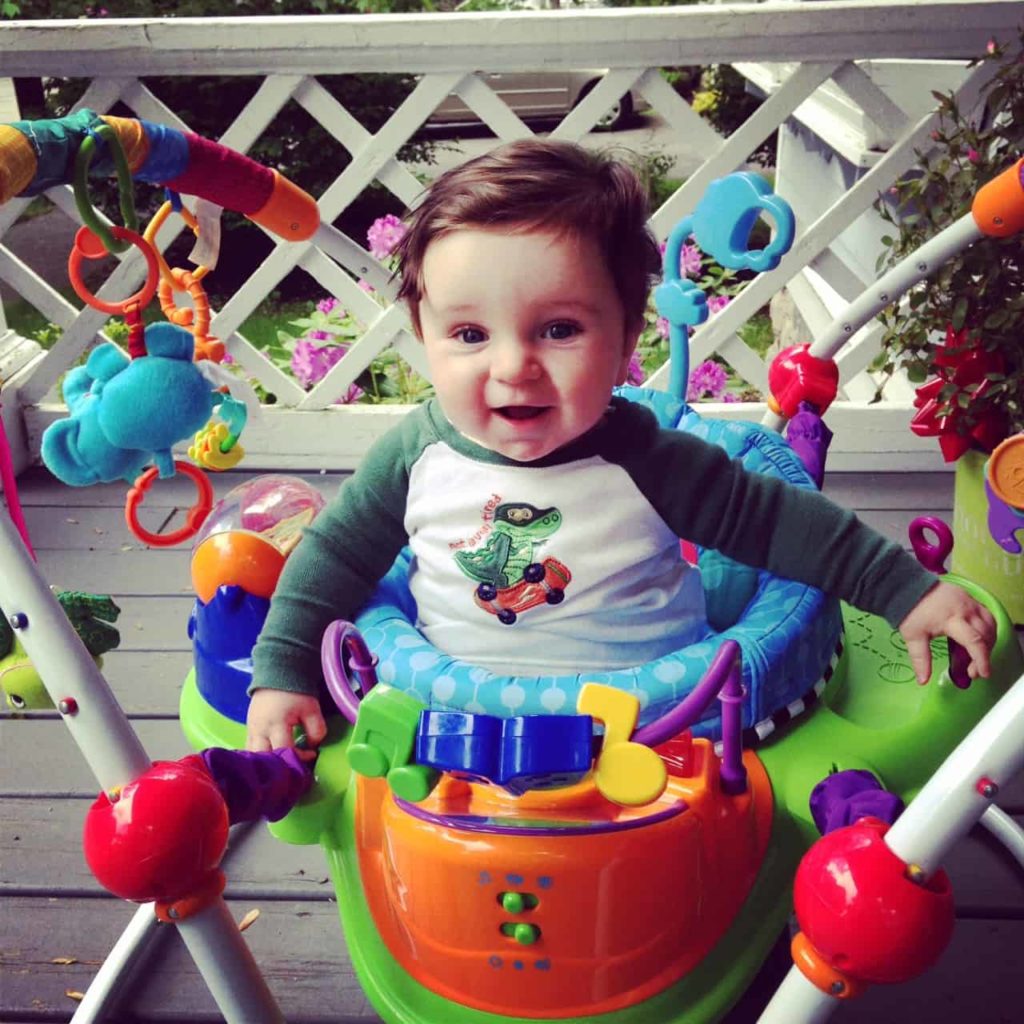 Not being able to phone it in, so to speak, is the toughest thing about having a baby so far. The inability to take a day off, and the knowledge that this is now a permanent condition of your life, can be kind of daunting to a new parent. Of course actual paid jobs are demanding and tiring too. I’m not really into the whole “motherhood is the hardest job in the world” thing. Although my friend Courtney did suggest an amazing tagline for this blog, which I’ve taken into consideration:

“Doing the world’s most difficult job and looking sexy doing it.”

The only problem is, I just can’t reasonably claim I have the hardest job in the world because, for me personally, I’ve already had harder jobs (social worker for abused kids? Uh, yeah, that was harder). I know I just have the one kid, and he’s still little, and he’s pretty cool, so my tune may change on this one. But right now I spend a lot of time on leisure activity and social engagements for someone with the world’s hardest job. If, say, surgeons, or the President, made this many coffee dates I would be pretty concerned.

But. The one kicker of motherhood is that you can’t call in sick. Ever. You can’t call in tired, or lazy, or sad either. And when you really need to take a day off, due to actual, bona fide sickness, guaranteed you’re not going to get any slack from your baby, who smells weakness the way dogs smell fear. And make no mistake, your baby will TAKE YOU DOWN.

Case in point, Nolan and I had the following conversation over the weekend:

Me: Nolan, Mama feels really sick and needs to lay down for a little while.

Me: I’m sorry, baby, it’s just that I have a very sore throat and need to rest.

Me: Nolie, that scream is a little loud for Mama.

Nolan: Blank stare followed by the sound of shit exploding up the back of his onesie.

So you can see, negotiations didn’t really work out for us. They might work better for you. Eventually I gave up, and conceded that, sick or not, I had a baby to take care of. Fortunately I had some assistance by way of an Exersaucer 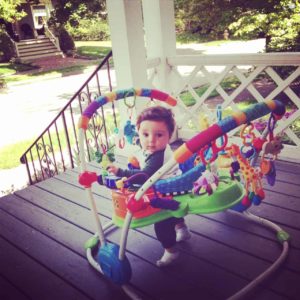 Resigned to the fact that as a mom you can’t also be a whining, sick baby yourself, I got up and out, best I could. It’s funny to suddenly realize you are not the one being babied any more, you are the one doing the babying for another. Not funny like “ha ha” funny, more like “I want to stick something in my eye” funny.

Anyway, up and about we were. On Saturday Nolan, Brian, my parents and I went to a college graduation party for my twin cousins, Emily and Andy. Both were very happy to have finished school, but Emily had gotten the idea that their commencement speaker was Beyoncé, only to find it was Governor Deval Patrick. That was something of a letdown, as you might imagine, to the undergrads.

Anyway, here is Nolan, posing with his cousins (wait, they are my cousins, so are they also his cousins? Second cousins? Cousins once removed? This always trips me up). Anyway who cares, they are college grads. They probably know the answer to this, what with their newly minted diplomas and all. 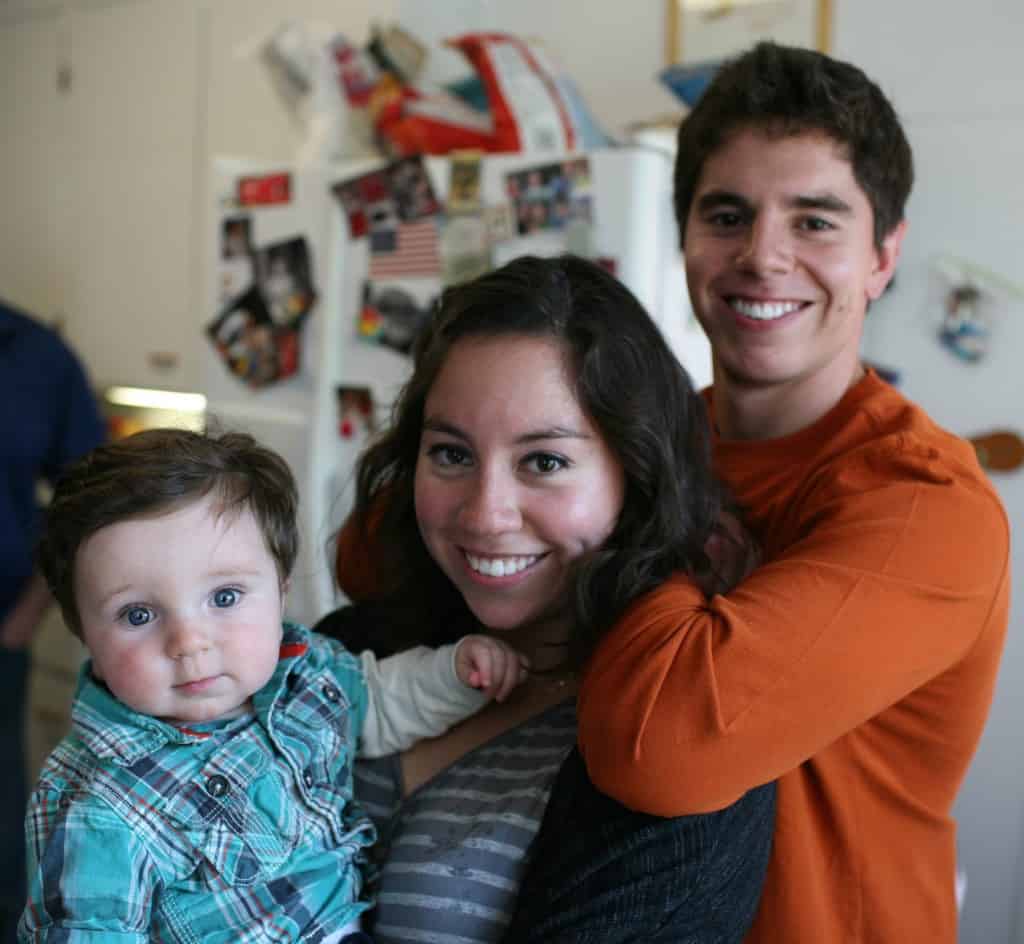 I hope Nolan is someday a college grad.  But if he becomes, say, an interpretive dancer or a professional thigh model, I will still support him. I’m flexible that way.

After the graduation party we stopped at the most glorious place on Earth, Salem Willows. Salem Willows is, to the untrained eye, kind of a dumpy arcade strip. Some may call it “America’s White Trash Playground.” But. You have to look a little deeper, or just have been coming here since you were a baby, to appreciate its magnificence. Nowhere in the world can you get better popcorn. The Skeeball arcade is the best around. When we first started dating, Brian and I went to Salem Willows to play skeeball all summer, saving up our tickets until we were able to buy this gem of a frame: 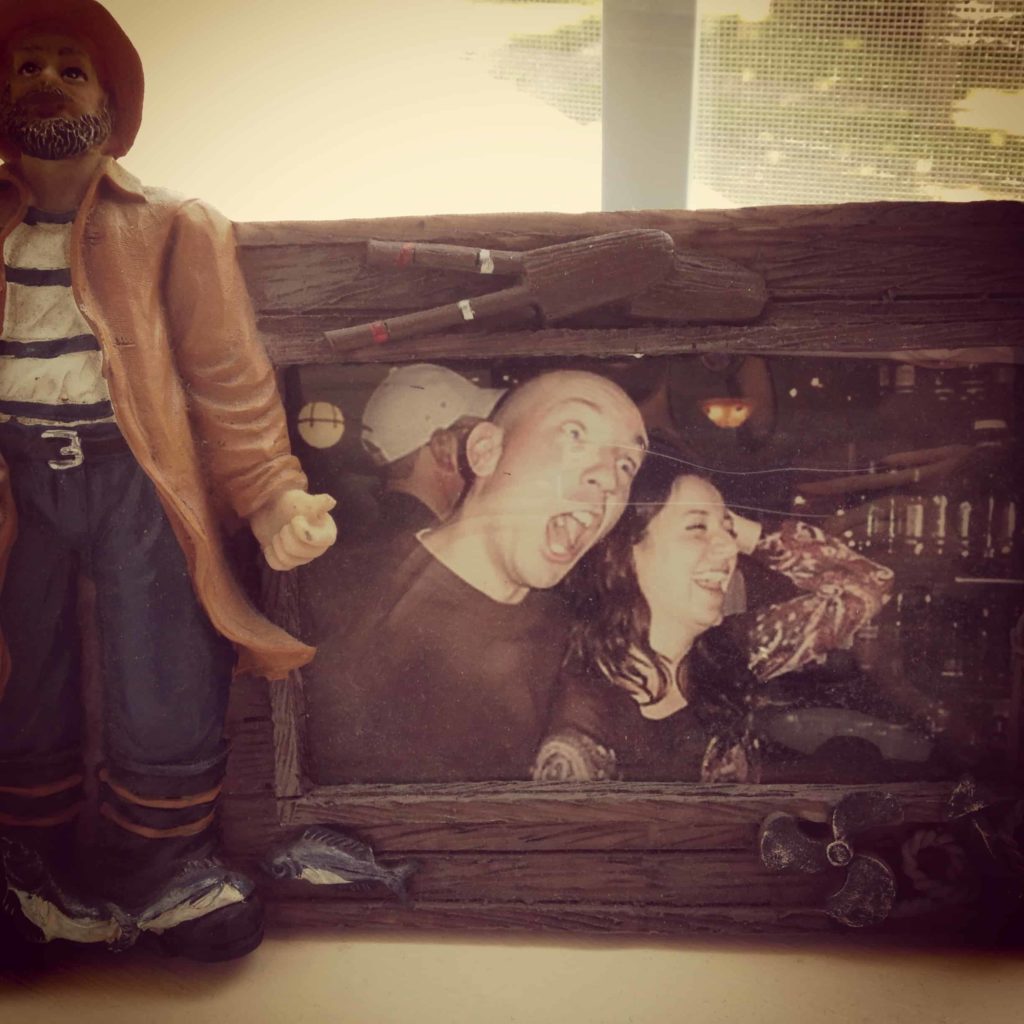 Let me repeat: all summer. That’s how long it took us to get the frame. The Willows doesn’t give shit away. It makes you work for it. One summer, when I was about 10, my cousin Lindsay and I saved up enough tickets to buy some whoopee cushions, and then we camped out in the public bathrooms letting them rip. It was a blast! Times were simpler then. I cannot overstate to you how much I love Salem Willows.

Thanks to Chrissie’s hit post, “The 11 Best and Worst Summer Activities to do with a Baby,” we decided that it was time to let Nolan have his first ice cream cone, and Salem Willows was the obvious choice. Fact: Salem Willows is the home of America’s first ice cream cone, and what’s good enough for America is good enough for Nolan. This outing also had a secondary benefit of introducing Nolan to the dangers of childhood obesity. Win win! 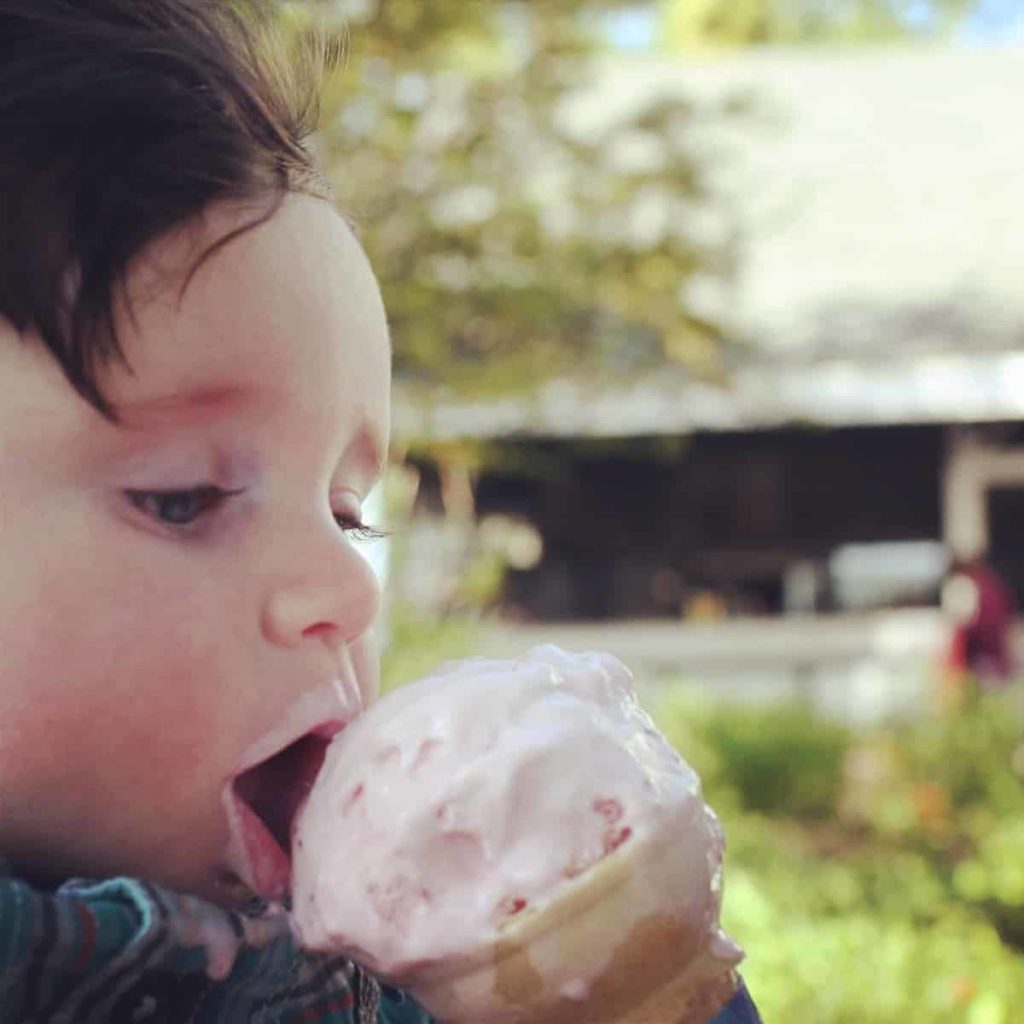 Nolan LOVED his ice cream (strawberry for his maiden voyage, in case you’re wondering), so much so that he gave himself an ice cream headache by crushing it so fast. At one point he grabbed hold of the ice cream itself, rather than the traditional method of holding the cone, and the coldness scared him into tears. But he recovered because he’s just that kind of guy. 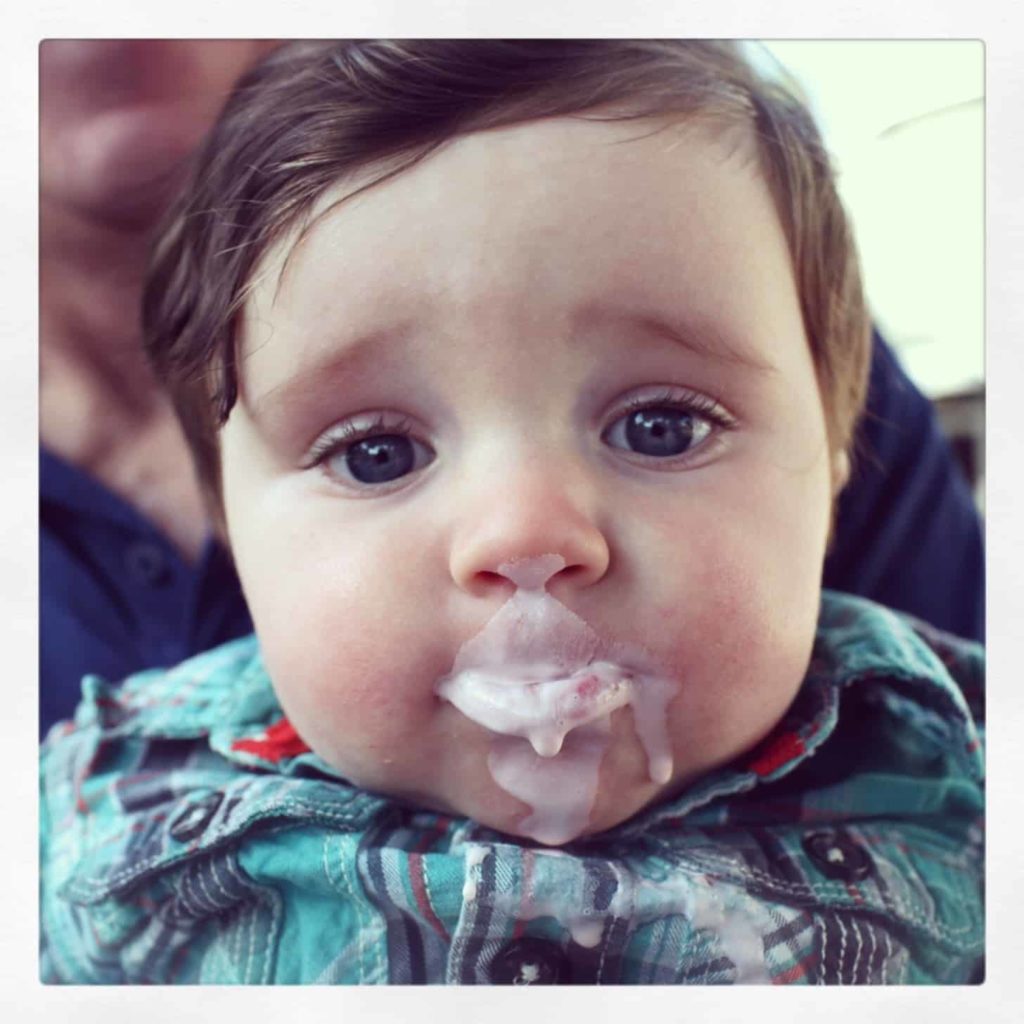 On Sunday we celebrated my Mom’s birthday (Nolan gave her the photo below as a gift – it’s his favorite picture of him and his Grandma together). 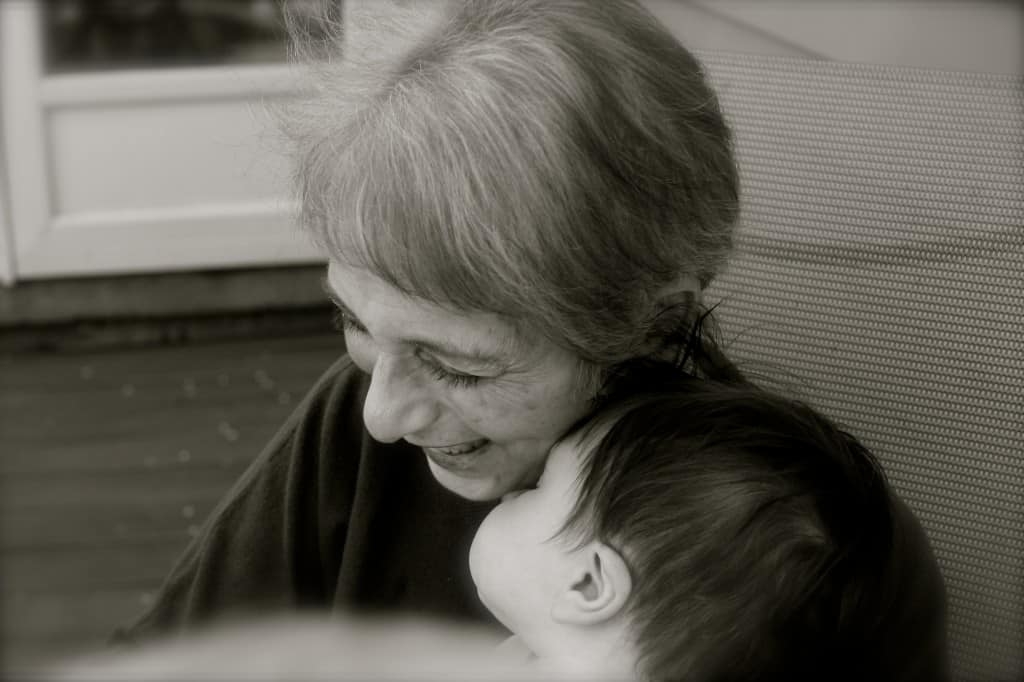 Grandpa Dan prepared some chicken on a grill that my maternal grandfather, Mike, made years ago out of an old metal kitchen sink and spare engine parts. You might say my grandfather was resourceful. He motorized his creation to rotate shish kebabs because, why not? 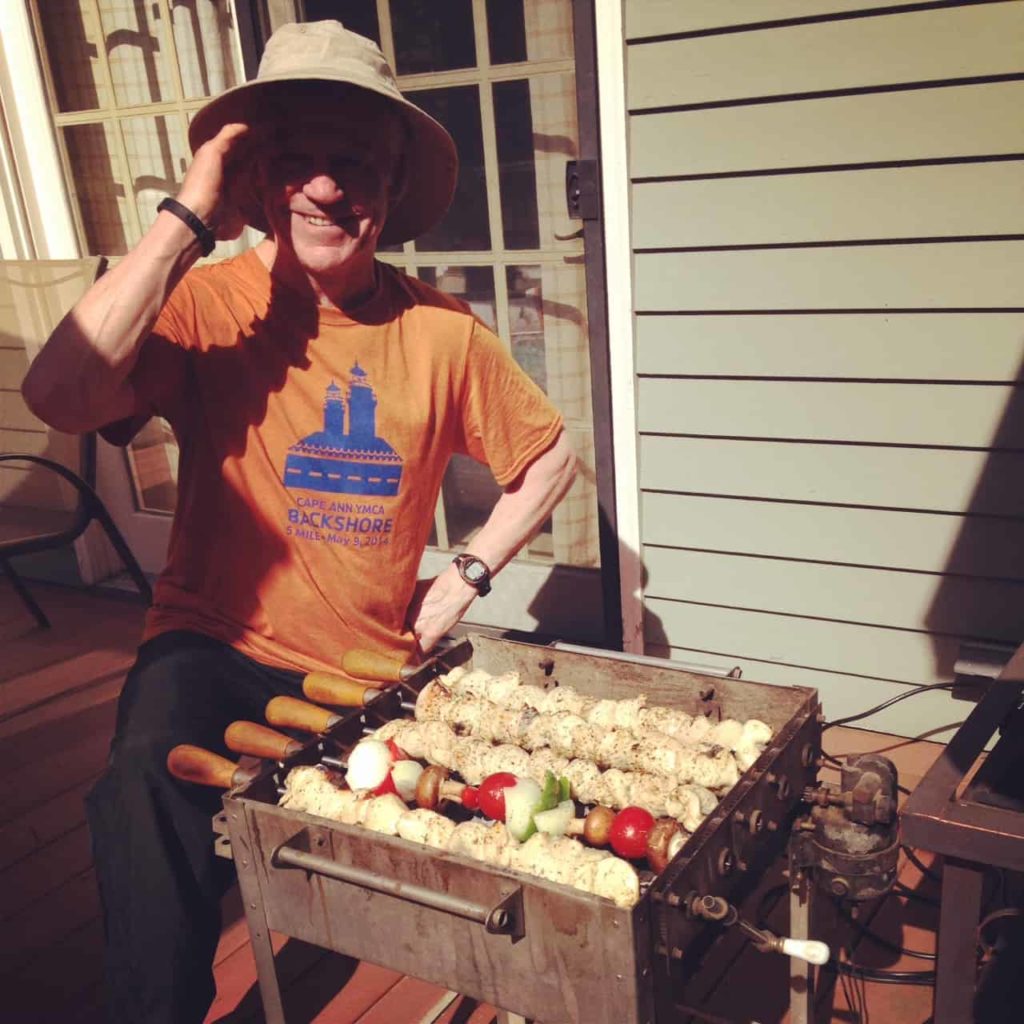 In addition to his uncanny ability to invent things that nobody has ever even considered that they may want, he also had the ability to eat whole onions the way normal people eat apples. So there’s that. He was an amazing guy. 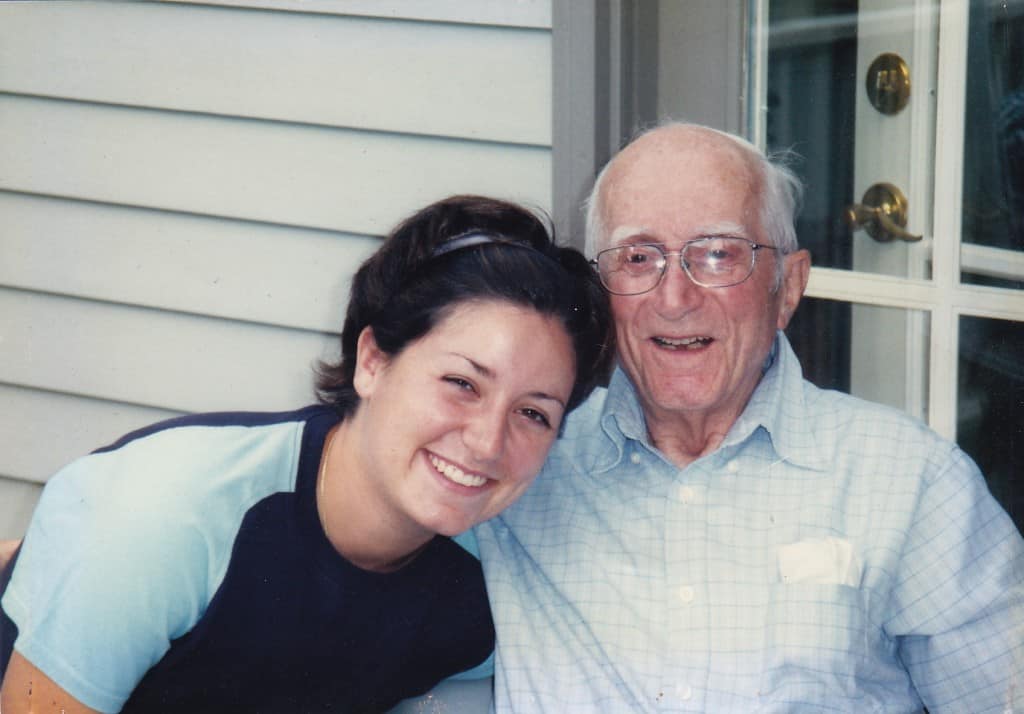 My Grandpa Mike and me, circa many years ago when my hair was worse than it is now, but better than when it was a mullet. 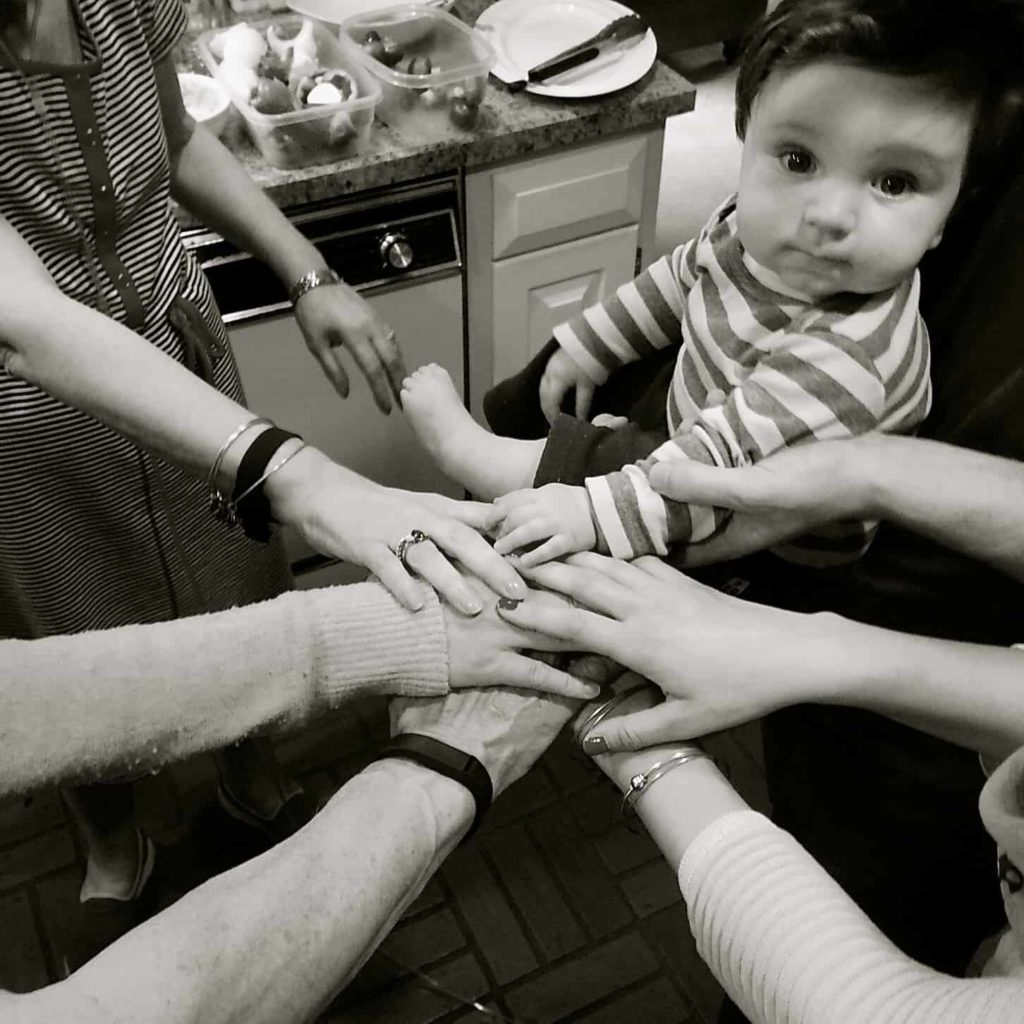 We brought it all in for a family cheer to end the party. I think this is how most families end their parties, no?

I have to say, despite feeling like shit all weekend, we had some nice times as a family. Having a baby that doesn’t let you wallow in self-pity is both a blessing and a curse, I suppose. I’m feeling a little better today, thanks for mentally asking, so I believe I can live up to my newly adopted personal mantra. 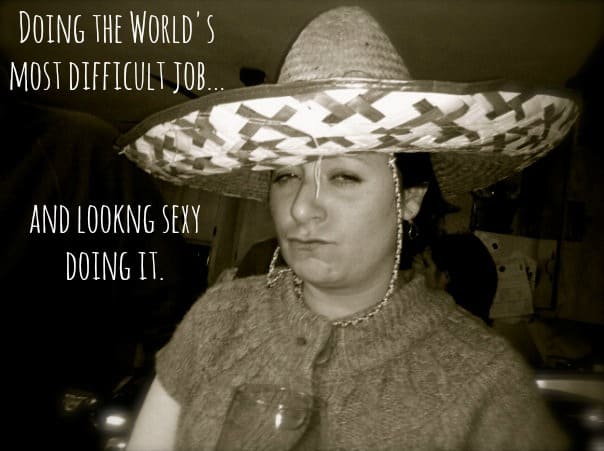 p.s. Guys, it really is hard to take care of a kid when you’re sick, yes? I hadn’t factored this in when deciding if I wanted to procreate. What have you found to be the toughest thing to get used to now that you’re a parent? If you’re not a parent, please feel free to comment on something totally unrelated that you find surprisingly difficult. This is an inclusive blog.