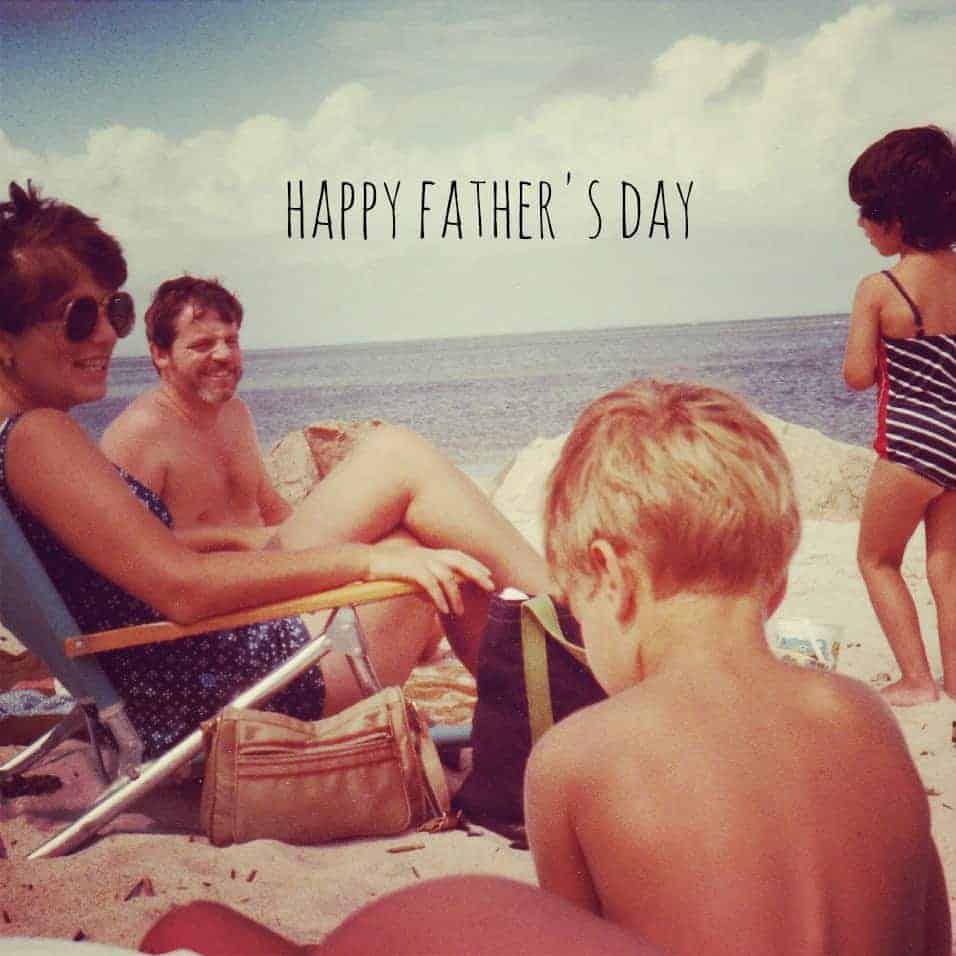 In honor of Father’s Day on Sunday, I’d like to share a brief anecdote about my Dad (currently known as “Grandpa Dan”). Lest you think I’m neglecting the father of my own child, later in the week, for his very first Father’s Day, I’ll be writing about Brian, and new dads in general. Incidentally, I now call Brian “daddy” around Nolan, even though I’ve always thought it was creepy when people did that and vowed never to do it myself. My personal rules are very flexible, turns out.

Anyway, today’s story is from a few years back, but it captures the spirit of my Dad as he was, and as he still is. 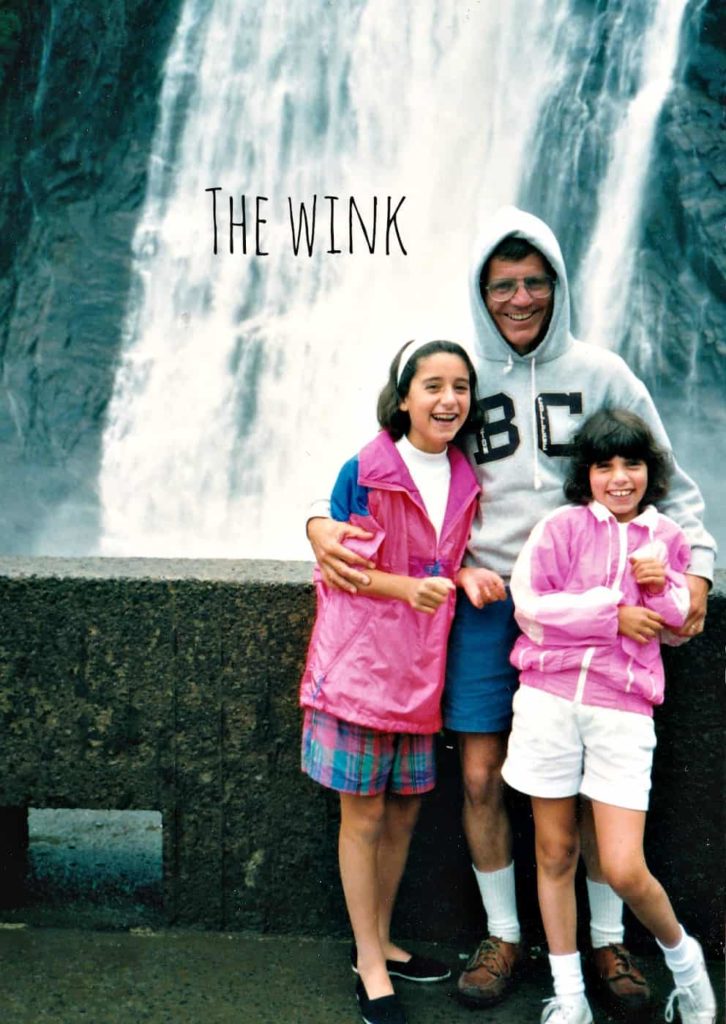 My dad with my younger sister Catherine and me, circa when culottes were popular.

“I think your dad was winking at me at dinner,” Brian whispers as a furtive aside.

Yes, that sounds about right.  We’ve only been dating a short while, and this is one of Brian’s early at-bats with my father.

My mom and dad are just out of earshot, gathering now at the bar after family dinner at a trendy restaurant, or at least what passes for trendy, on Boston’s North Shore.  My Mom is eyeing the cocktail menu, trying to play it cool while subtly determining which drink is least likely to bare the slightest resemblance to alcohol.  Ideally the cocktail will have less alcohol than you could ring out of a Wet Nap, and even that may need to be watered down.  Dad, Heineken ready in hand, has a grin on his face that is directed at nobody and also at everybody.

“He does that sometimes,” I say to Brian, eager to normalize the confusing display.  “It just means he likes you,”  I brightly press on, “In a completely non-sexual, potential future son-in-law sort of way.”

“He was winking at me too,” Jim adds casually, glancing up between sips of Sam Adams.  My sister’s then-boyfriend, it appears, had also been on the receiving end of my father’s wanton eye spasms.  This, Catherine and I agree, is a good sign, indicating in some vague, creepy- to- the-unfamiliar- with- Dad sort of way that our father has given his unspoken approval as to our choices in boyfriends.

If we’re being honest with ourselves, though, our Dad is indiscriminate in matters regarding his daughters’ choices in mates.  The fact that he seems to be taking kindly to both of our newly minted significant others is on par with observing that a squirrel has taken to a smattering of nuts.  My mother is a different story.  She sizes up the merchandise and has no trouble returning the rejects to customer service.  But Dad, he’s more of a “love the one you’re with” sort of fellow.  He is unusually comfortable with everyone, paying no mind to things like “social norms” and “personal space,” even amongst strangers (especially amongst strangers).

Dad is also comfortable with displays of affection that would make more uptight types, like hippies and swingers, flush with embarrassment.  It would not be uncommon for our father, out of the blue, to share a one-sided embrace with a spry bus boy or congenial maître d’.  To be fair, Dad would just as soon tussle the hair of a strapping young mailman as to kiss the top of a balding, homely middle-aged widow’s head, if the moment seemed right.  This is a man who simply does not think twice about doling out gestures of randomly placed, unsolicited affection. You know, when the mood strikes.  At times a veritable well of goodwill springs forth from somewhere deep inside my father, and once that volcano of affection erupts anyone within striking distance is fair game.  Those beyond arm’s reach may miss “hands-on” Dan, but will still feel a virtual embrace via his winking.

This is a man who loves Liza Minnelli (“Now that is a performer!) and who tears up when they sing “Edelweiss” on The Sound of Music. He also loves beer and football. But mostly Liza. And thank goodness for that. We already have enough “stoic” men out there. I would imagine there are plenty of fathers who are intimidating to their daughter’s boyfriends, and who are not adept at expressing affection freely. My dad, on the other hand, is a sort of predecessor to Phil from Modern Family. An affectionate, emotional type of guy who wears his heart on his sleeve. And also, he’s kind of a winking weirdo. That’s why we love him! The world could use a few more Grandpa Dan’s. 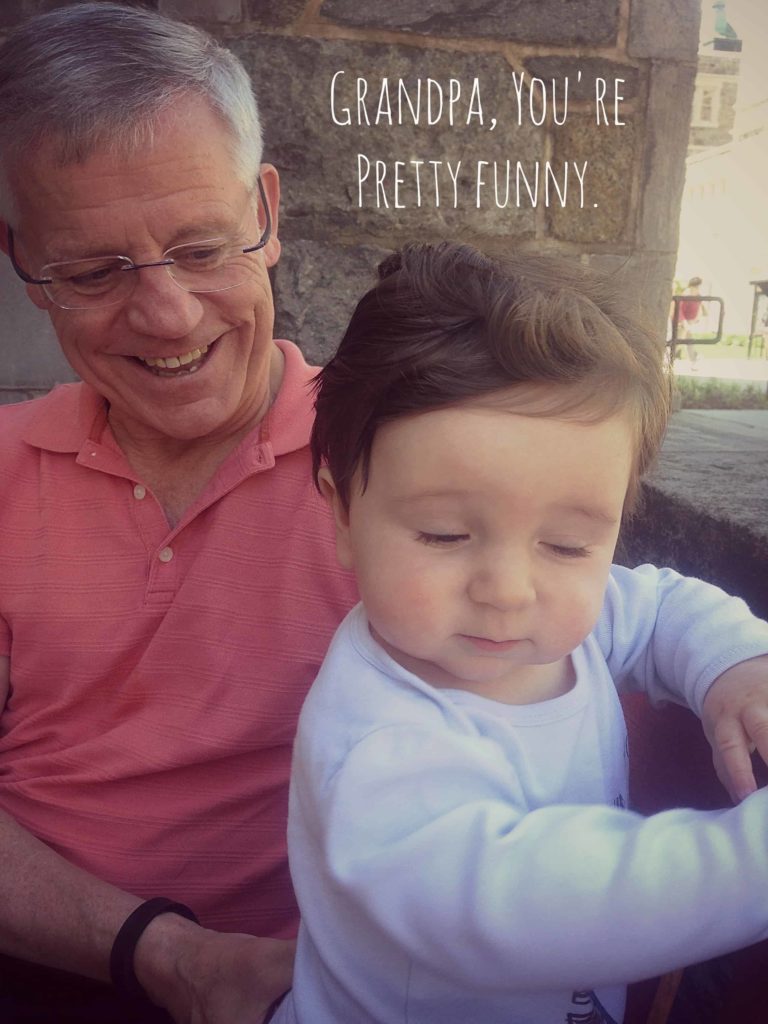