×
You are here: Home / All Posts / Tying Your Baby to Your Wedding Gown & Other Convenient Ways to Carry Your Baby 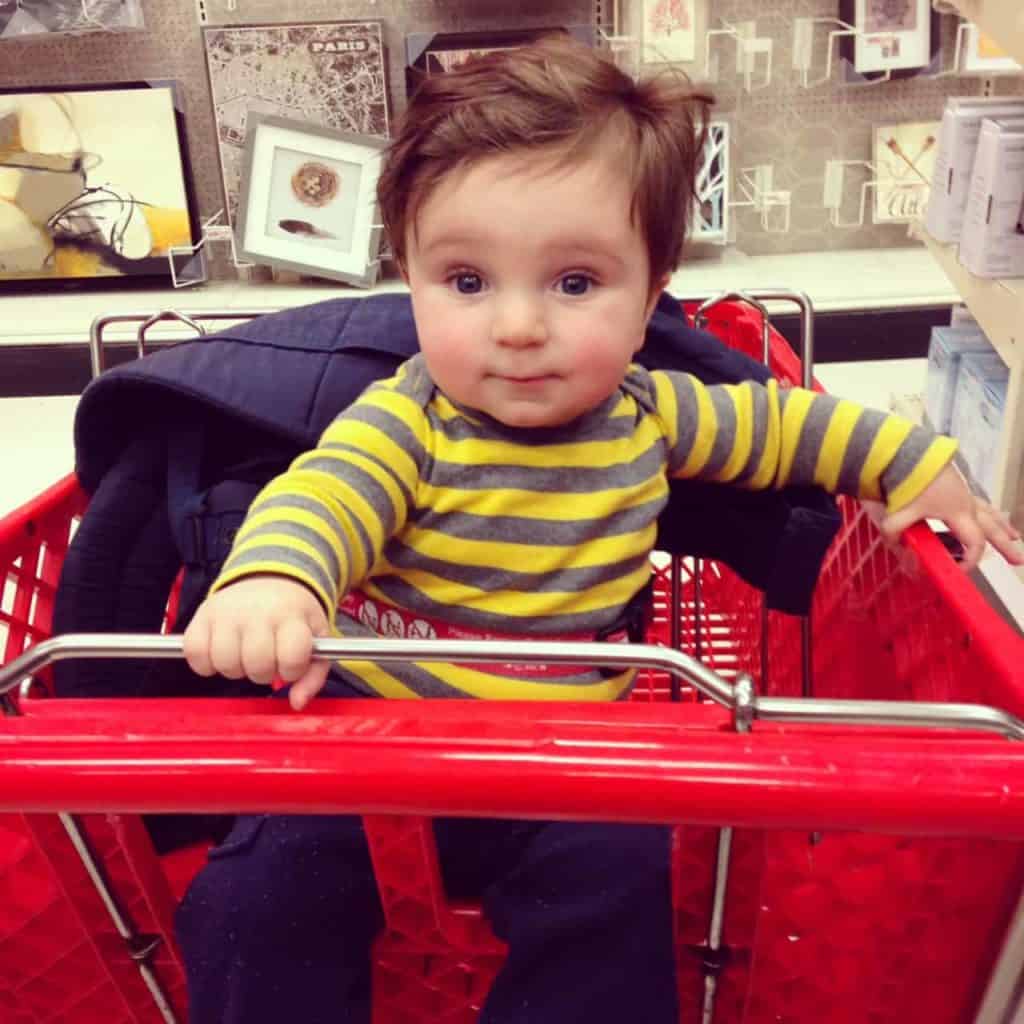 Yeah, it’s not a wedding gown, but a cart at Target is a pretty sweet ride.

Guys, did you get a look at this? The lady who dragged her baby on the train of her wedding gown??

Here’s the article link: A Tennessee woman has come under fire for her decision to attach her newborn daughter to the train of her wedding dress and drag her as she walked down the aisle.

I love this news story so much. It’s so unbelievably great but in a totally messed up way that might lead to social service intervention, but probably won’t on account of the fact that there is no precedent for this sort of thing in social services.

That’s because most people are not crafty enough to think to adhere their baby to their gown. And also because the social worker assigned to the case may be on the side of the guests that enjoyed this display and were moved to tears by its beauty. Seriously.

Here is a visual, in case you have trouble with imagination: 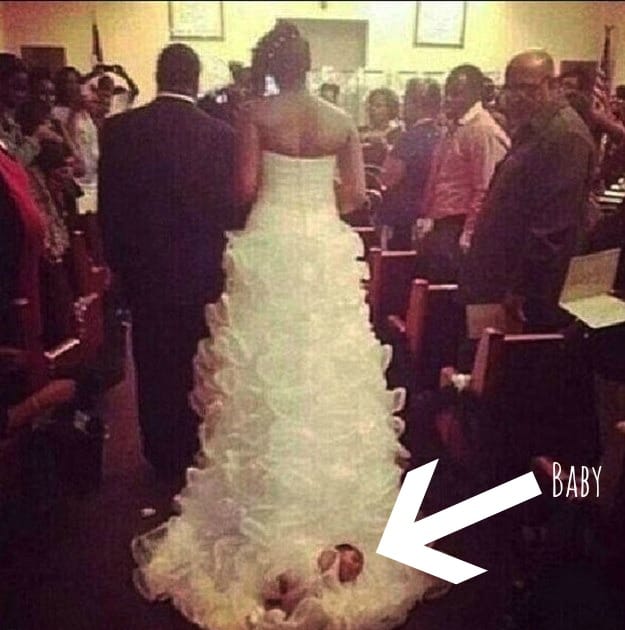 Well. This is genius. It’s baby-wearing 2.0. While I’ve been trying to figure out babywearing for beginners, this mom just skipped over all the regular lessons and was like, you know what, I got this.

As the mother of an infant myself, I understand the challenges of trying to carry your baby while also doing other important tasks, like the laundry. And getting married. I know it’s hard to figure out how to juggle it all.

Some of us take the well-trodden path (BORING!) of using our arms. Some of us like baby carriers

, or strollers. And others of us like to tie our newborns to our dresses and drag them on the floor. All good choices.

That baby is one month old. ONE MONTH OLD! How many kids can say that they got dragged down the aisle that young? Not many!

Even if I were to renew my vows with Brian tomorrow, and even if I could find a way to secure Nolan onto my gown, he would still be 7 months behind this little girl. Maybe if he gets married someday we can arrange for me to be dragged down the aisle on his bride’s train. It will be a good impetus for me to  get slim.

So anyway, this madness got me to thinking about the various ways I’ve carried Nolan.

Since I was a kid I’ve always really liked bags and satchels and backpacks. Not like fancy lady-purses, but more the type of bag that I imagined explorers would use. I coveted anything leather that came from a roadside “Trading Post.” I fancied myself an adventurer and needed to look the part. So when I realized that there was also an option to pretend I was an adventurous/natural mom, I was in.

As a new mom I became obsessed with researching baby carriers. It was easy to get swept up in the excitement once I discovered that there was this whole super hardcore category of moms who “wear” their babies what appears to be ALL THE TIME. A lifelong joiner, I was all, “Yes! This is my thing and these are my people!”

But then Nolan got pretty fat. 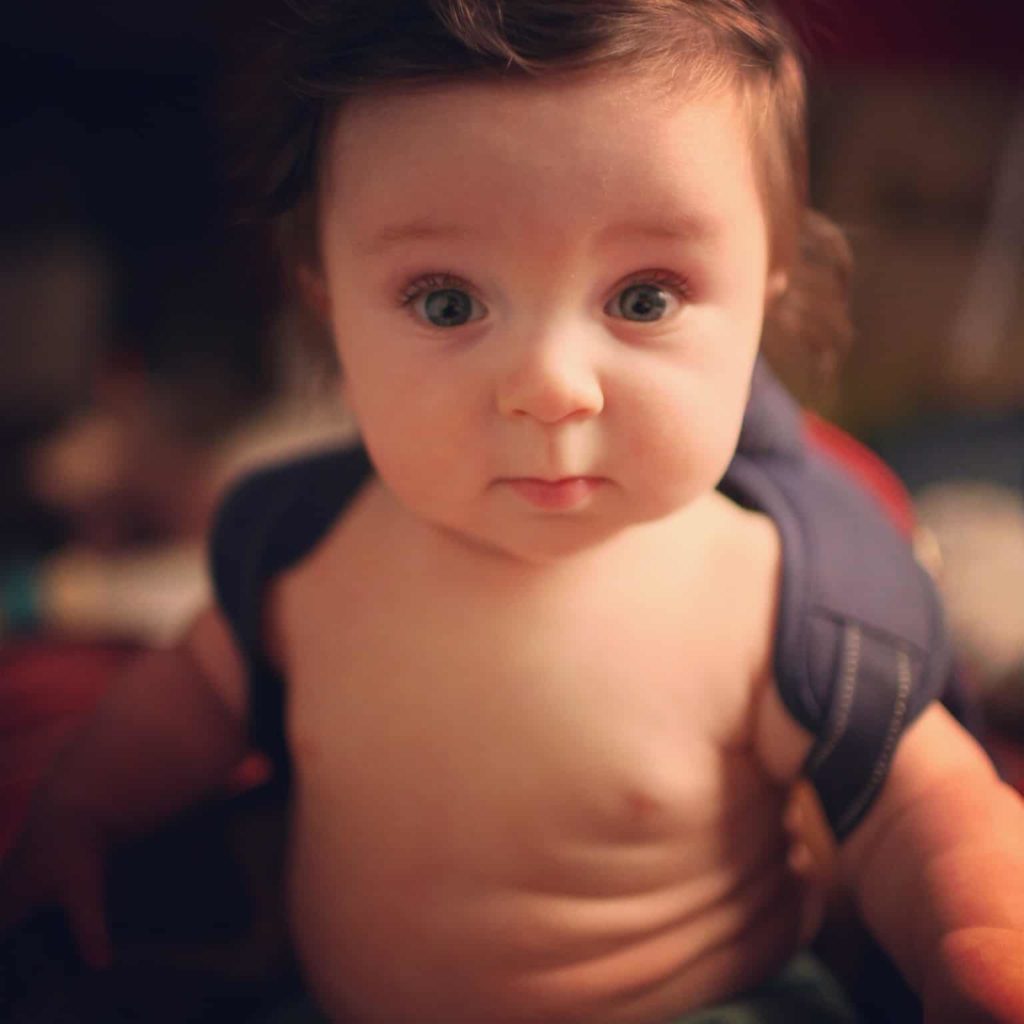 I realized that in reality I could only carry my pork chop around in small doses. Like for errands, not so much for entire vacations through Europe (note: We have not gone on any vacations to Europe with the baby. It’s just that in my imagination, I fancied myself the type of mom who would wear my baby around if we did).

All this being said, I have benefited a lot from using baby carriers. They were especially helpful when Nolan was really little, and now when I want to run into the store or take a short walk they’re great.

So, with that usefulness in mind, here are some alternatives to dragging your baby behind you on a gown: 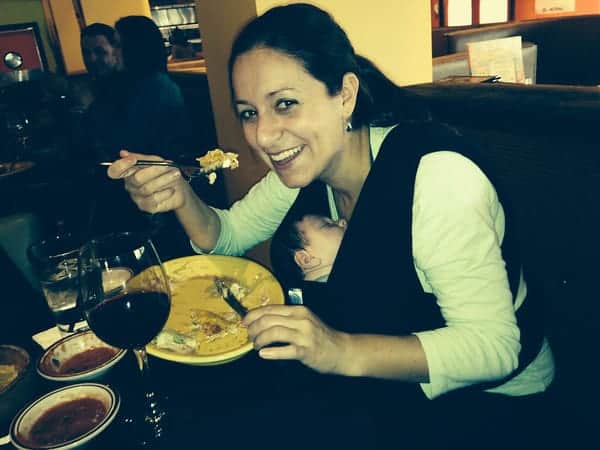 My first wrap was a Moby Wrap. Given to me as a hand-me-down, as soon as I saw the ridiculous length of the damn thing I put it right out of my sight. I flipped it off and banished it to the closet.

I have limited manual dexterity accompanied by a fear of getting tangled up in fabrics, and it was like this thing was taunting me. The Moby did not look like the carrier for me, although its “simplicity” (simple for something requiring a PhD in wrapping) did appeal to my imagined notion of myself as “natural” and “kind of hippy.”

The Moby sat there for weeks until one day I came across a You Tube video and realized that I could totally do this!

Do not be intimidated, the Moby is really easy! Yeah there are like 50 steps and you have to swirl it around and around your body in a form of elaborate interpretive dance, but once you get it you will feel like a total badass.

I’d recommend the Moby for really little babies, although allegedly you can carry 3 year olds in it. I can’t imagine this, but then again I only studied the most basic wrap. I’m not super advanced and also, who wants to lend me a toddler to practice on?

Pros: It’s cozy, soft, and you will impress people who are watching you put it on.

Cons: It drags on the ground when you’re getting the baby into it, which really sucks in the winter when there’s snow and slush to contend with. The K’Tan is a lot like the Moby but smaller, with less fabric and less intricate wrapping. It’s the lazy man’s Moby. I like it. 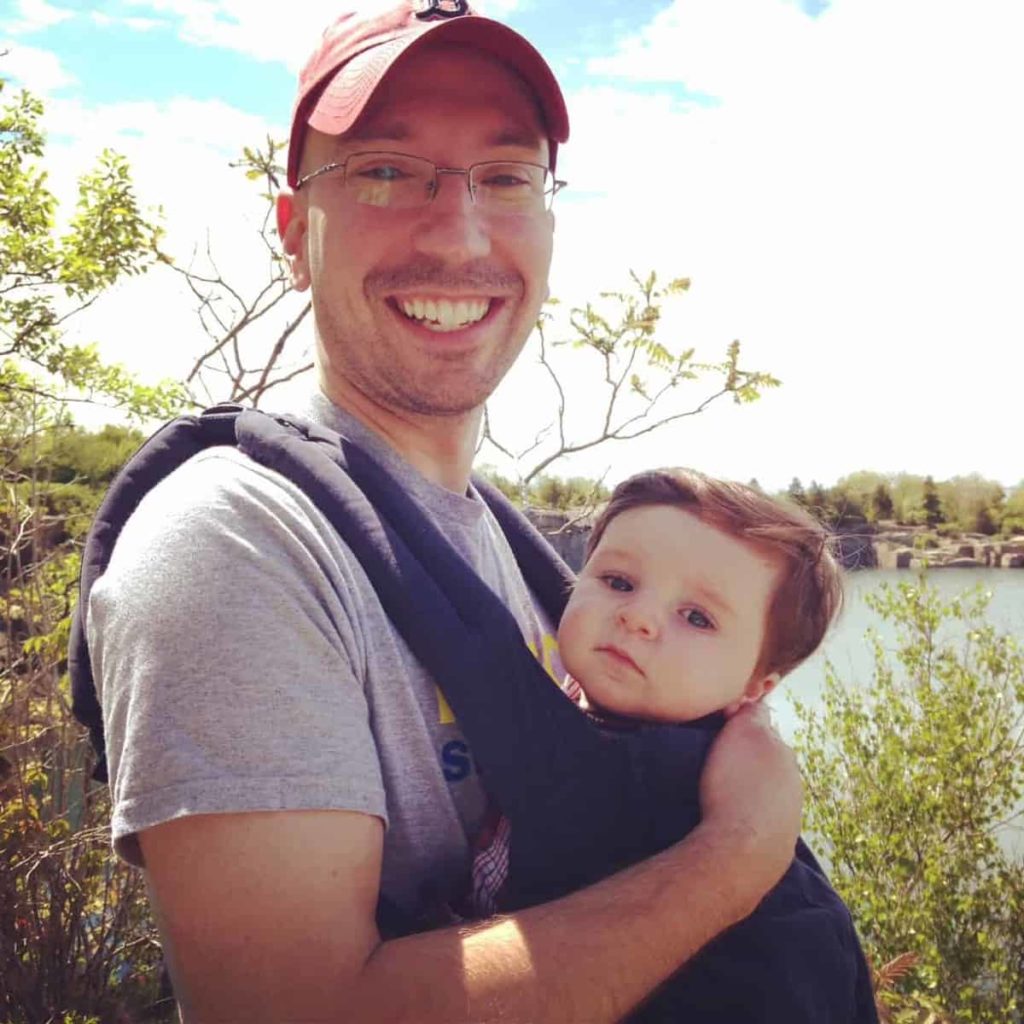 The Ergo is really great. At first I thought it was super difficult to put on. Like, I would be sweating and panicking and get tangled in it. But then I realized that it’s not difficult at all, I was just doing it wrong. Watch the online videos carefully and take your time practicing on an inanimate object. I was not ready for a live baby to start with. My bad.

Pros: The Ergo has amazingly soft/sturdy fabric, great support for your baby, and has a pocket! The pocket is a huge help during errands. There’s enough room for your credit card, keys, and at least 10 strips of bacon. The Ergo is great as your baby grows past the newborn stage.

Cons: The Infant Insert needed for tiny babies is cumbersome, and I was always worried because I couldn’t see if Nolan’s airways were open. I’m the kind of mom who likes to see the airways.

I’d recommend it for larger/older babies. I also have trouble wearing it for long periods without getting shoulder strain, but this varies depending on your body type.

Send me a private message if you want all of my detailed personal measurements, so you can compare your body with mine and make a guess as to whether this carrier will work for you. 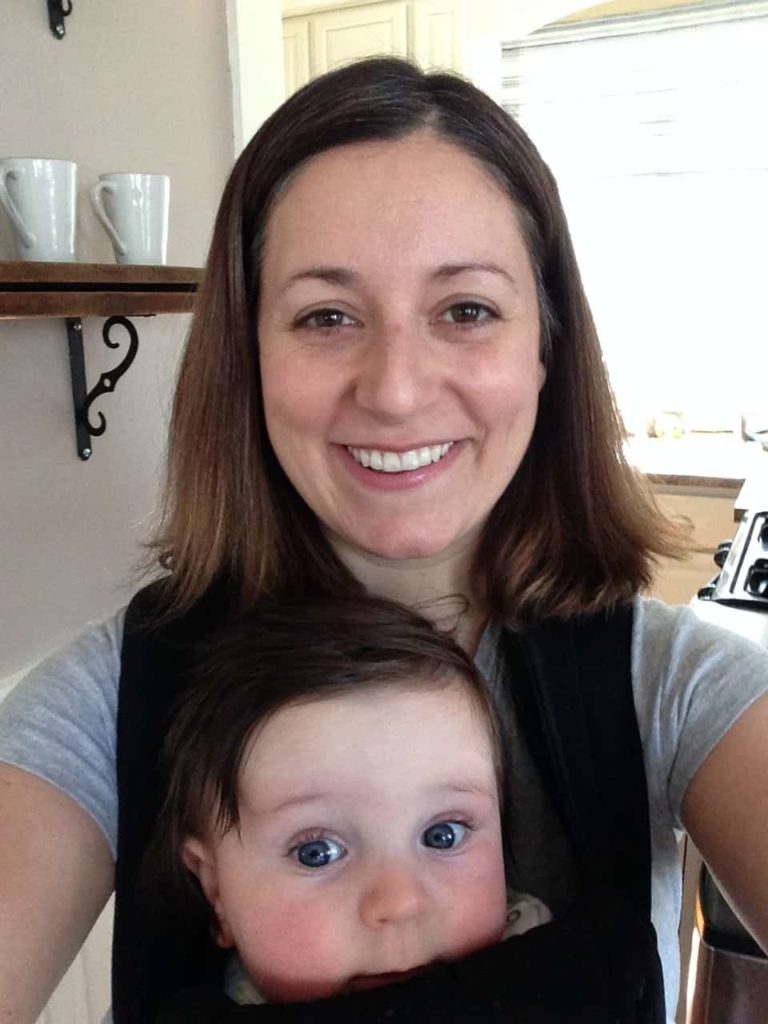 is a beauty. It’s the Cadillac of Carriers (wait are Cadillacs still fancy? Were they ever fancy? I’m meaning to indicate that this carrier is fancy).

The Beco is super easy to put on, and your baby can face forward. Some people are against forward facing babies on account of the idea that it will scar them for life to have too much visual stimulation on a walk, or something along those lines. I’m not really sure. Nolan seems to dig it. I’d ask your baby.

Cons: No pocket! Material isn’t as soft as the Ergo or Moby,

And let me just throw it out there that strollers also work nicely, even if they don’t make you look like a natural/hippy/adventurer. They can really give your back a needed break, you know?

I love my Bumbleride Stroller

. I have the Indie jogger. Have I used it more than once to jog? Hell no! Did I imagine myself jogging with it regularly? Of course! But still, it’s nice for walks and rides like a bike.

You still need a little stroller that folds up for errands, like the Key Fit Caddy.

There’s nothing really cool about this stroller unless you prize things like reasonable price and practicality, in which case, it’s a winner. 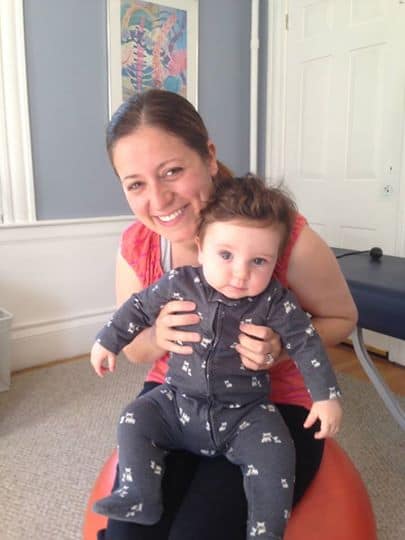 Above is a photo of Nolan and me at the chiropractor. Something about growing a human inside you, having major abdominal surgery to get said child out, cocking your arm and neck at weird angles around the clock breastfeeding, lugging around a 25 pound carseat, and taking walks with your baby strapped to your chest has sent me straight to the chiropractor.

Dr. Bill Nolan (my Nolan is not his namesake, but maybe should have been) has saved me many times during pregnancy (screw you, sciatica! Dr. Bill will GET YOU!) and the postpartum period. Thanks Dr. Bill!

What carriers/strollers/gowns do you use to carry your baby? What’s the best and worst you’ve found so far?