Let me start by saying that I have the utmost respect for that often maligned creature, the toddler. As a local toddler once said “Toddlers are a lot like real people. But better.”

It’s a complicated age. The age of innocence, on the one hand, but also the age of, how shall I put this delicately – being a little d-bag. It’s a strange time in the evolution of a person. 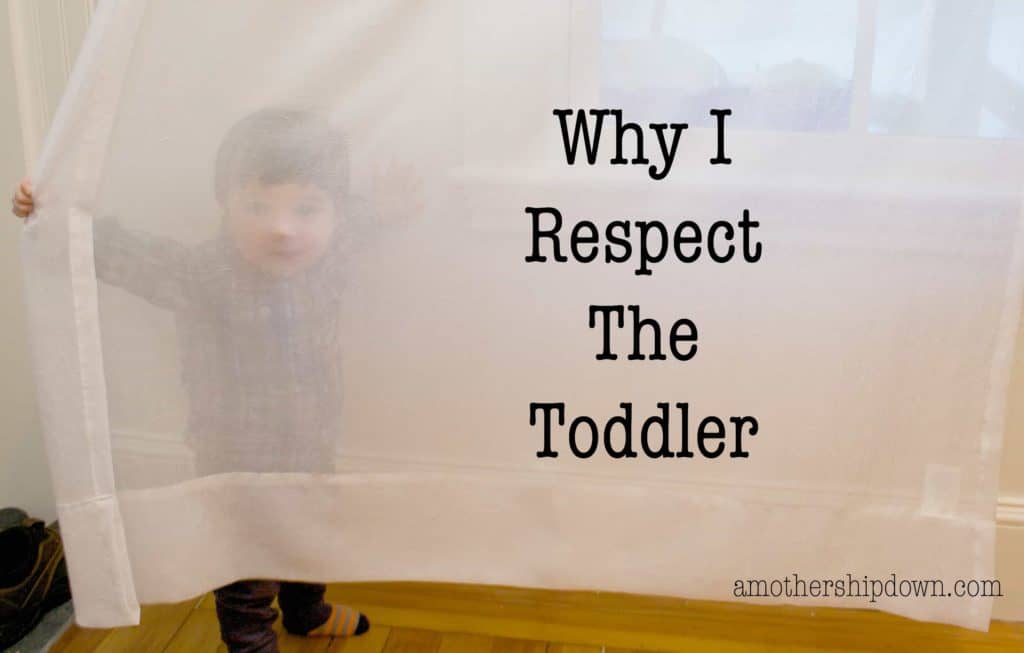 I think I’ve lost my way here. What was I saying?

Oh yes, that I respect the toddler. I feel like I haven’t built up the strongest case in support of this declaration just yet. So let’s shift gears and focus on the positive traits reserved largely for the 2T set.

Look at these kids: 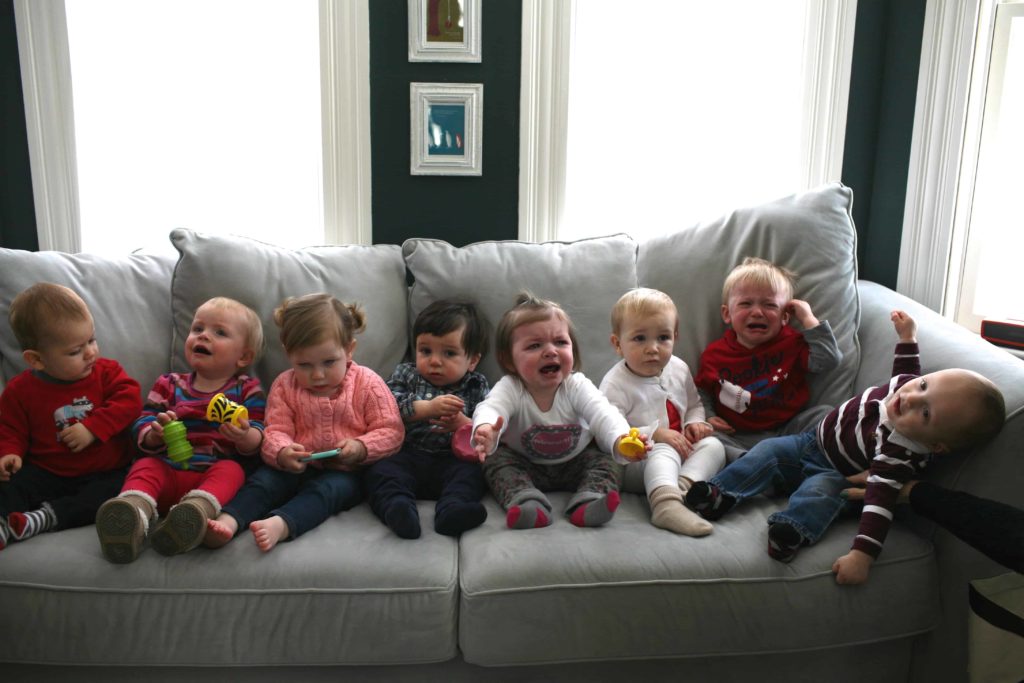 They are keenly aware that their parents have made a herculean effort to get them fed, changed, dressed and out the door for a play date. They know it means a lot to their parents that they have a great time, or more essentially, do not embarrass the family.

They will NOT let their parents down, because of the gratitude that runs deep within them. Gratitude for the very fact that their parents gave them the gift of life and also, in many cases, goldfish crackers.

The boy on the far right is so pleased that he’s trying to hurl himself onto the floor in a spasm of delight. The girl in the pink sweater’s head is about to spin 360 degrees and spew green vomit because her little body cannot contain her gratitude.

Ask yourself this: Can you stick your toes in your mouth and/or run back and forth across your living room floor for seven hours straight on nothing but dairy products and blueberries? CAN YOU? I didn’t think so. You know who can? Your nearest toddler. 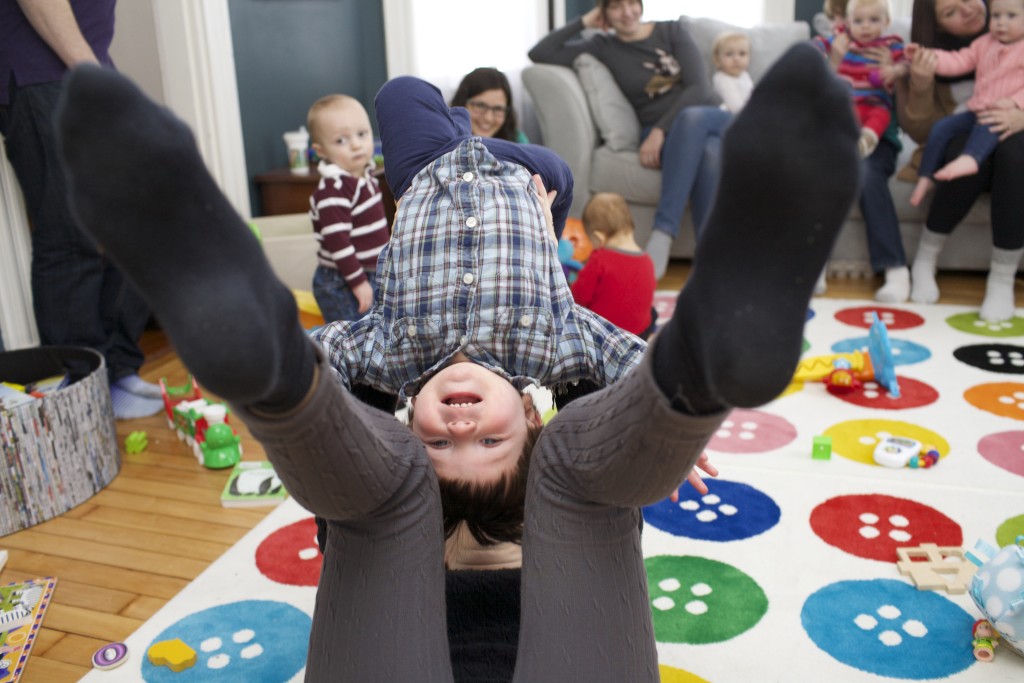 Training to be a Russian gymnast. (Nobody tell him he’s not Russian)

This is truly one of the toddler’s hallmark traits. Toddlers are able to wait and wait and wait to get what they desire. They never get agitated or frustrated when asked to delay gratification. They are a veritable study in Buddhist doctrine. 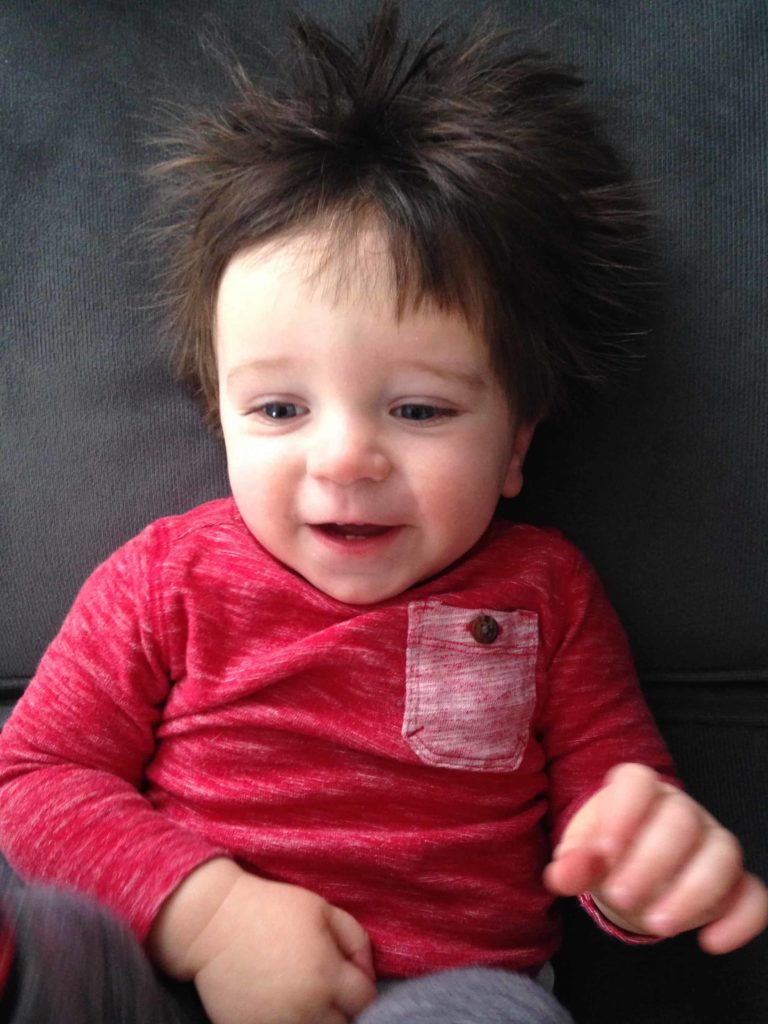 Yes, mom, I will sit here HAPPILY while you prepare dinner! Take your time! 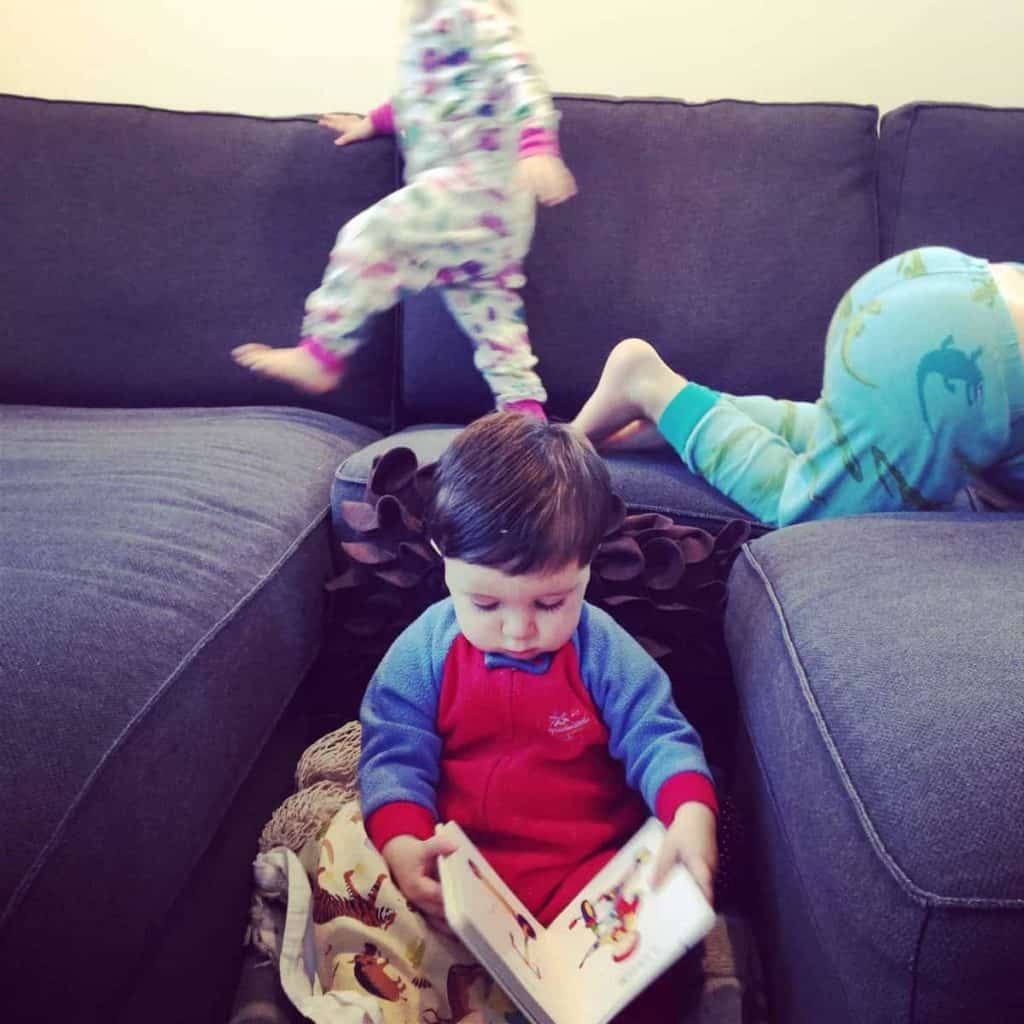 Toddlers are voracious readers. Sometimes they are so voracious about it that they eat the pages of their books. Do you eat your books?

And while we’re at it, when’s the last time you learned a new word? Any new word? It’s time for some introspection here.

FACT: Your toddler may seem like a simpleton when he kisses the dishwasher, but he is learning more in one day than you have learned since 1997.

Know what they want and GO FOR IT 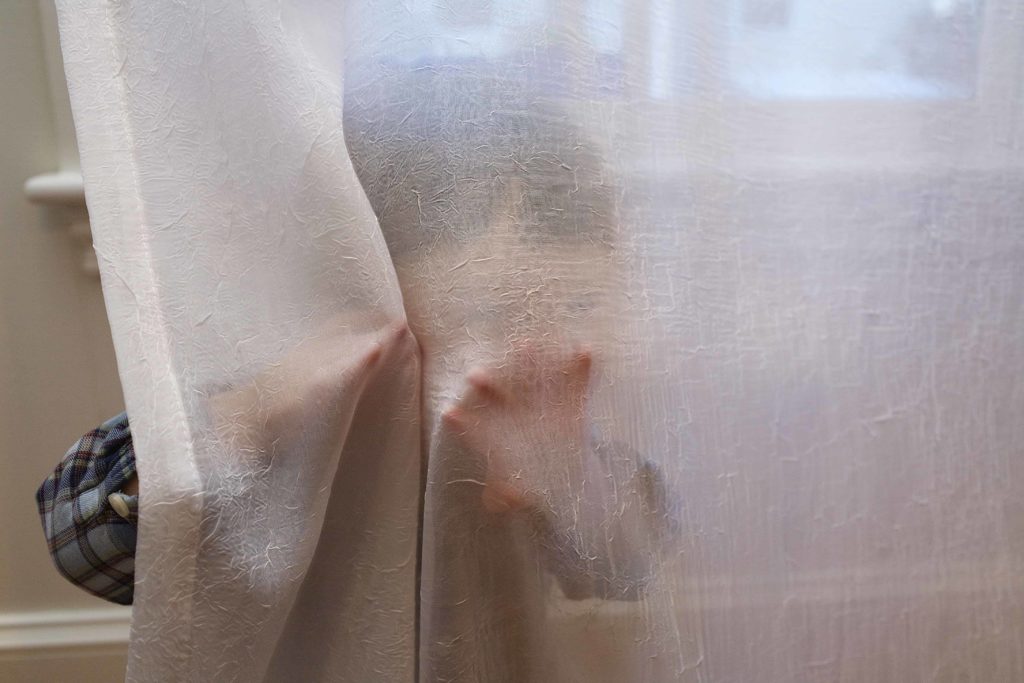 What this kid wants is to tear down all the curtains in the house.

Do you fight with passion for what you want? It’s worth asking the question.

Would you be willing to throw a tantrum because you weren’t allowed to, say, stick your hands in a toilet? I think not. That’s because a “strong reaction” requires commitment, which adults are sorely lacking. Keep the toddler intensity and focus in mind next time you’re going for a promotion at work. Just ask the first toddler you see for tips. It will serve you well. 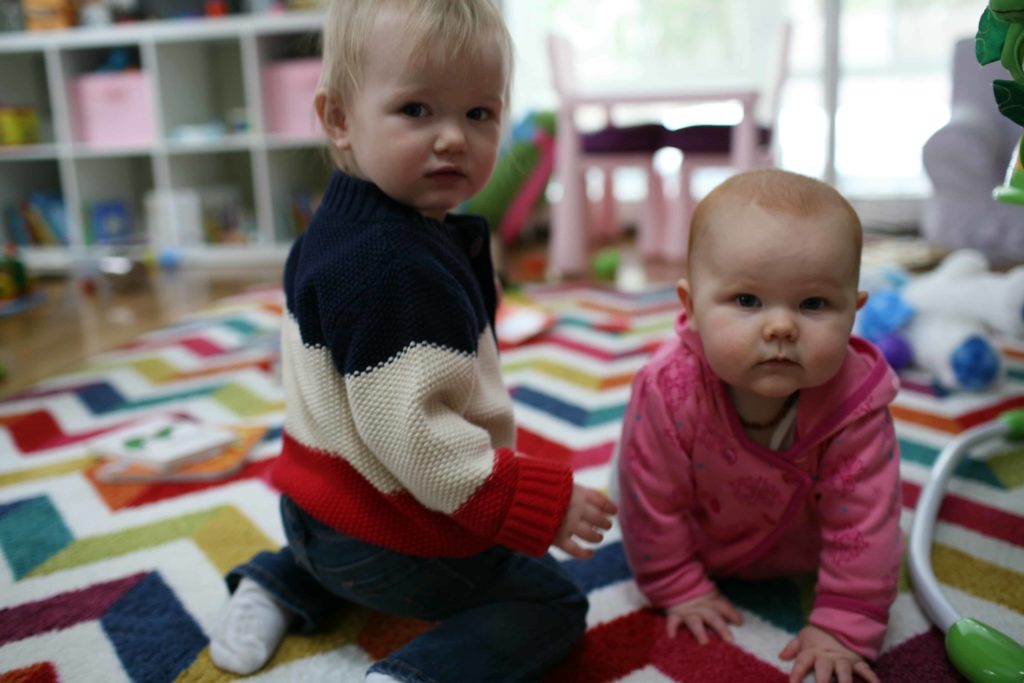 What are my eyes telling you? Close. Closer. Keep trying, you’ll get it…

Many if not most toddlers communicate through an elaborate dance of grunts, whines, hand gestures, and strategically timed feces deliveries. A lot is said with their eyes. Also sometimes with their lips.

The other day my son was babbling away in his crib and he sounded an awfully lot like an auctioneer. I can’t be sure, but I suspect he’s live streaming to a QVC affiliate.

No shame in their game 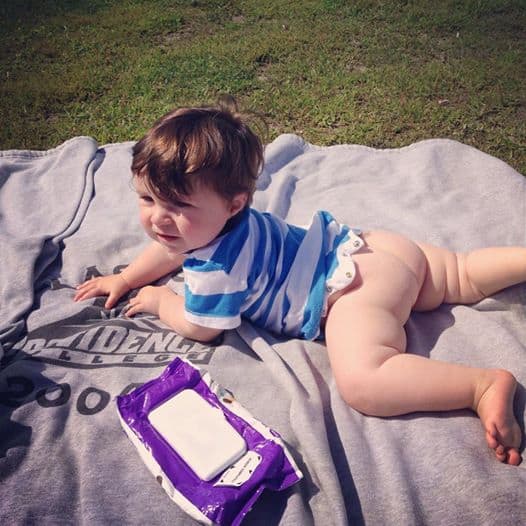 Move along. Nothing to see here.

Do you feel free to grab your own junk while grocery shopping?** Do you run up and down your hallways naked, thigh rolls jouncing to and fro? The toddler not only accepts his or her physique, he/she delights in it. No part of the body is off-limits, at any time. No shame in their game.

**This may be illegal in your state

A toddler lives by a set of deeply held convictions typically reserved for religious converts and Amway salesmen.

This belief system was discreetly implanted into your toddler’s brain by some divine combination of biology, Daniel Tiger, and a secret manifesto available only to babies on Amazon Prime. It is unflappable.

For example: 100% of toddlers are aware that possession is nine-tenths of the law. A toddler holds this and many other truths as sacred. Just try to reclaim your iPhone from a toddler who has recently gained control of it. You will see what I mean.

Toddlers know that “sharing” and “compromise” are just buzz words thrown around by hippies. They stand by their personally held belief that all objects are their objects. This is called conviction. Look it up. 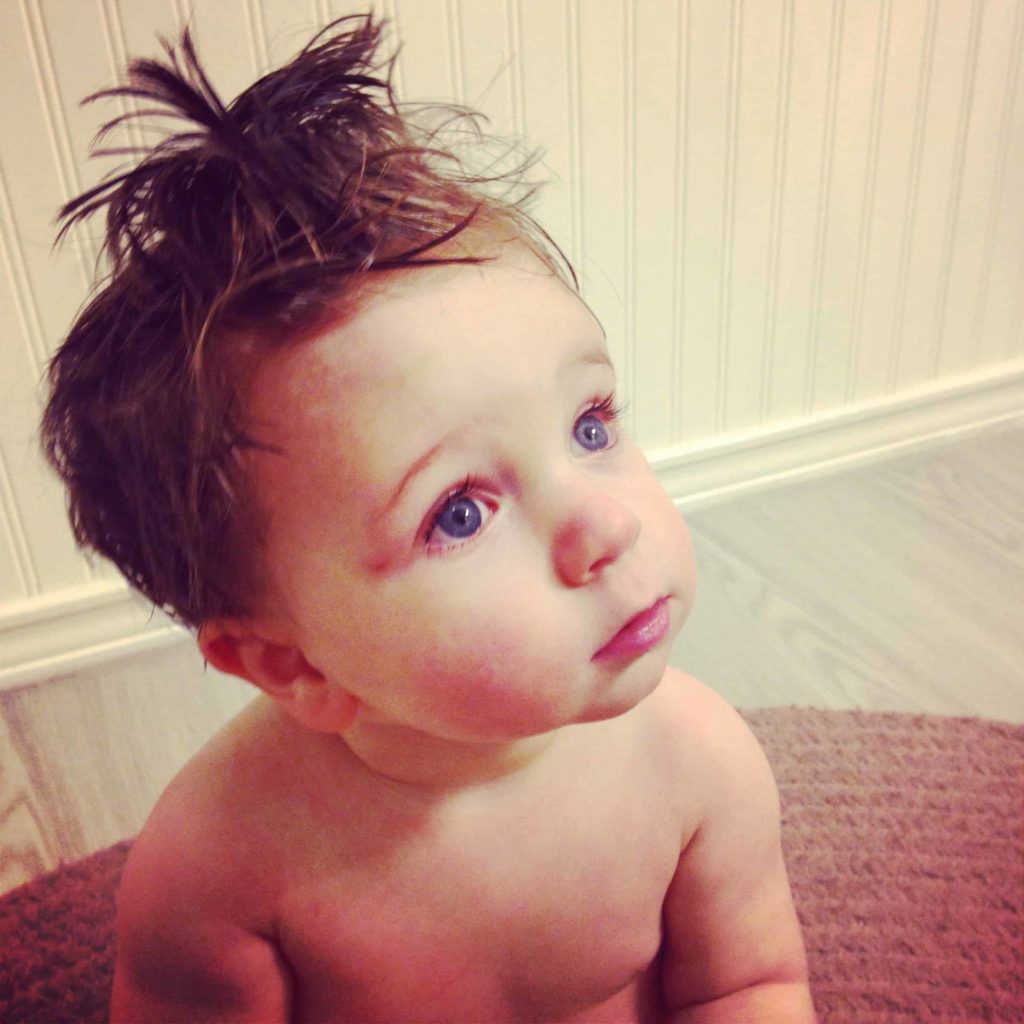 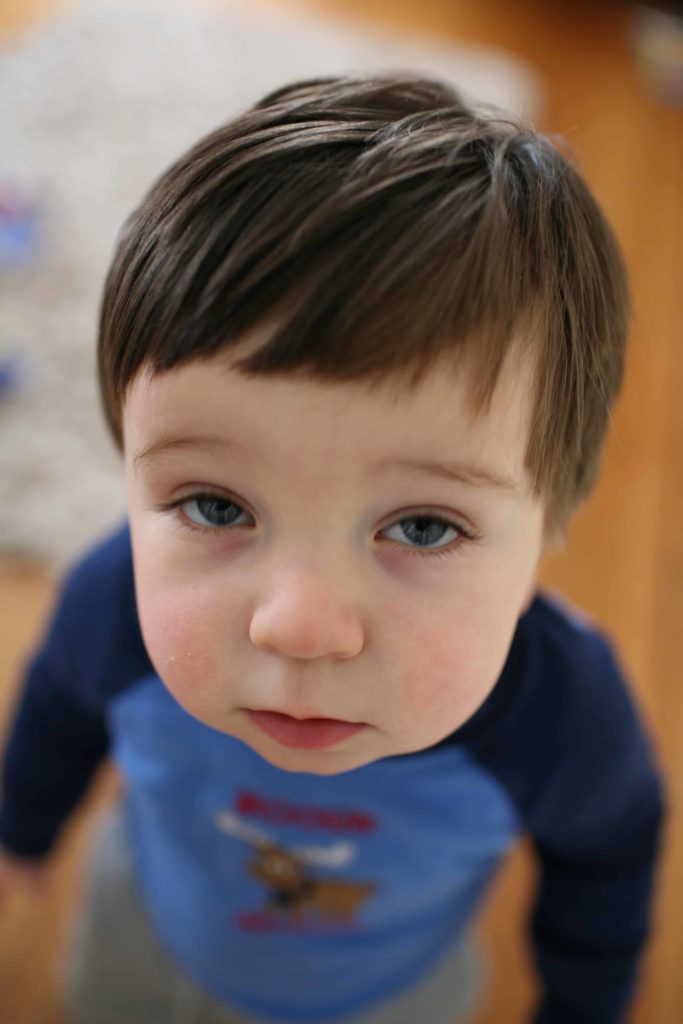 “Why hello, friendly lady at the mall. I see that you’re trying to engage with me by complimenting me on being ‘such a good boy.’ Social norm dictates a response on my part. But you know what? I think I’m just going to stare blankly at you. Yeah. That’s what I’m going to do. Social norms mean nothing to me, if that wasn’t clear.” 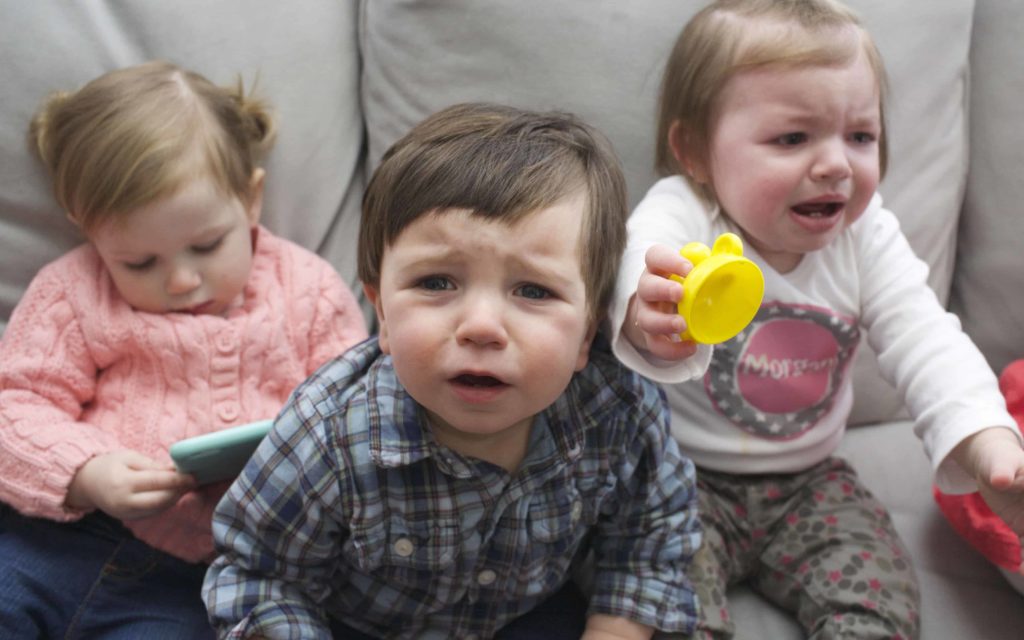 “Why yes I am hosting a play date with some gal pals. But you know what I think I’ll do instead of be charming? Shit my pants and throw a tantrum. Boom.” 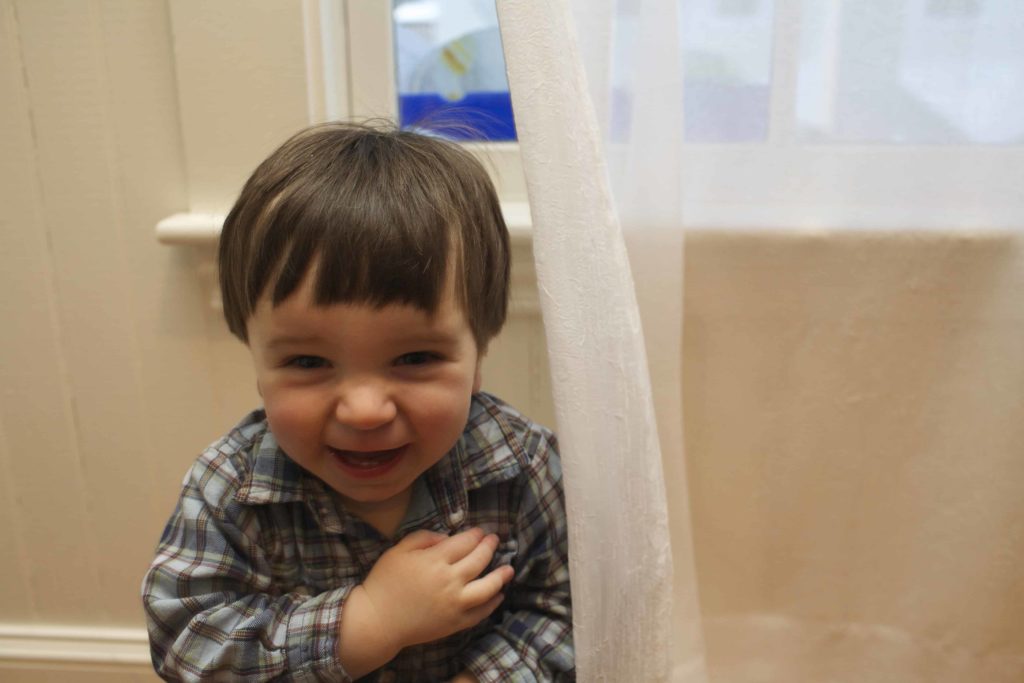 A toddler is naturally enthusiastic. This enthusiasm extends to many situations in which it is not entirely prudent, but that never stopped a self-respecting toddler anywhere.

Toddlers know that zest is a trait associated with increased likelihood for college graduation. Parents: do you want your child to go to college? Ok then. Stuff your ears with cotton balls and put on a padded suit if you need to. You’re riding this crazy train and there’s no getting off.