×
You are here: Home / All Posts / Sleep Training Our 7 Month Old: What Were We Waiting For? 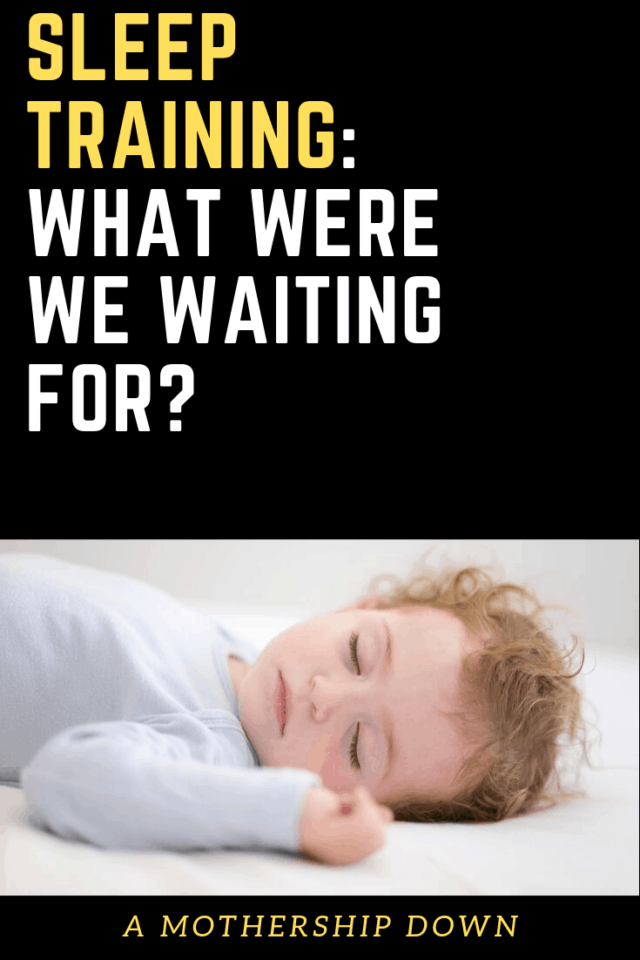 For the past two months, Brian and I have been well aware that we’re overdue to sleep train Nolan (age 7 months). This awareness came not because we are particularly observant parents, but because Nolan’s ability to wedge his baby/man-thighs into his swing (which he enjoys sleeping in) was lessening with each new fat roll. 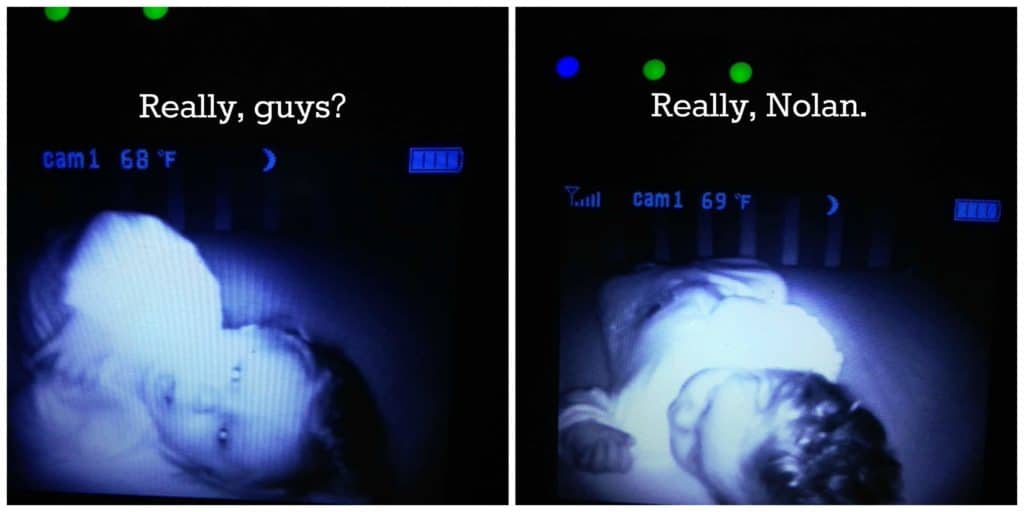 My capacity to nurse my starving little dictator of a baby all night on demand was waning. I *may* have  been overfeeding him, as evidenced by the fact that if we fell asleep nursing I would often find myself snuggled in a pool of milk-vomit hours later. That is even less desirable than it sounds.

Also problematic was that if I was out for the night, it left Brian using a variety of dubious soothing strategies, most notably his attempt to calm Nolan by pulling him into bed and placing a pacifier right over his own nipple, thinking it might trick the baby into believing he was breastfeeding.  I’m sure it will surprise you, as it did Brian, that Nolan was not falling for this.

So, we had some room for improvement.

Moving Nolan from his swing to our bed to his swing to our bed and stuffing him with milk all night was not a good plan. Please hold your comments (until the comment section where you can feel free to judge us). On top of the obvious issues, it is also disconcerting to babies to fall asleep in one spot and wake up in another.  Rocking a baby to a sound sleep on your lap and then sneakily transferring him to his crib, for example, is like falling asleep on your couch and then waking up on the kitchen floor without knowing how you got there.  It IS disconcerting, as any passed out co-ed can tell you.  And we were making this mistake too.

Time was running out.  We adopted the steely look of determination that comes with parents who have been squeezing their baby into a swing for a little too long. This. Would. Happen.

We sat Nolan down for a talk: You can run, we said (Ok you can’t run, you can’t even crawl. You don’t even know you have feet). You certainly cannot hide. We can see you RIGHT behind that monkey. It’s happening Nolan. And we will TAKE YOU DOWN. 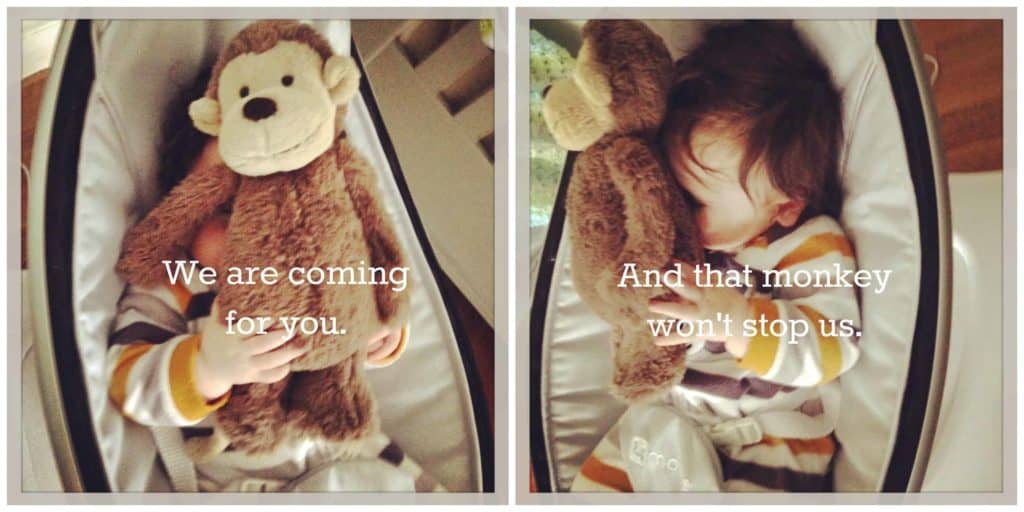 Why had it not happened earlier? Well, in our defense we are lazy.

Once we decided, f*!k it, GAME ON, we went for it full throttle. Ferber time. We decided to cut out all problematic “sleep associations” in one fell   swoop, Soviet-style (note: I don’t know how the Soviets sleep train their babies.  I DO know how they train their gymnasts. I think I’ve made my point. This was NOT going to be done with a soft touch). Yes, this was a little abrupt.  But you know what else is abrupt? Being expelled from the womb, and we weathered that storm. Also abrupt? Crashing your car because you’re too tired to see straight.

So in that spirit, no more: 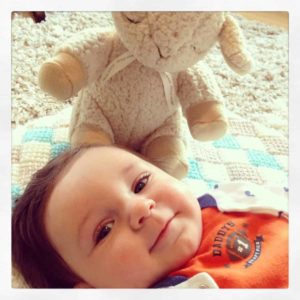 The Sleep Training Plan (in a nutshell)

Number of Minutes to Wait Before Responding To Your Maniac Baby

Possibly the most anti-climactic experience of my life.  Less climactic, even, than the end of “Castaway.”  I was geared up for an epic battle, timer in hand, sweatbands on my wrists*, but my enthusiasms proved unnecessary.  Nolan went down like a lamb.  Yes, kind of like an agitated lamb, but mostly lamb-like.  We had to give him a quick, reassuring pat on the back at 3 minutes in, and again at 8 minutes.  And then….merciful, merciful silence. We were so thrilled when he was still asleep a few hours later that Brian suggested we wake him up to celebrate!  But that is idiotic.  We are novice parents, not imbeciles you guys.

We did need to go through the whole routine a few times during “The Preliminaries,” but it never took Nolan more than 8 minutes to go from thrashing beaver back to docile lamb .  The revelation that my child was capable of actual, restful, self-directed sleep was so thrilling that I felt like a Born-Again.  Or a seat filler on Oscar night.  It was that good.  The only thing that kept me awake, actually, was my own excitement and the fact that I was starving.  I took a 2 a.m. break for some Babka, which really hit the spot, and also which reminded me that I had taken away Nolan’s night-time feasts.  His typical night feeds are roughly on par with drunk-ordering a pizza from your dorm room at midnight, so this was a big change. I was hoping he wasn’t hungry but was not about to wake him up to ask.

Round 2 (The Battle Round)

Un-be-lievable.  We put The Great Noldini down at 7:00.  At 7:10 Brian checked on him and gave a quick ‘hang in there’ pat on the back.  Two minutes later and he was down for the count.  I cannot over-emphasize that our baby is no champion sleeper generally.  What this made clear was just how much of our problem had been from user error. When left alone for just a few minutes, our kid can sleep! Well then, our bad! Nolan is either a quick study or a quitter. But really, who the fuck cares?  Now get this: Nolan slept for 9 STRAIGHT HOURS, had a quick early morning feed, then back down for 3 MORE HOURS!  I’m not sure who is doing the math here, but that equals 12 hours of sleep.  The dazzling success of night two was almost ruined when I accidentally started blasting music through the monitor (monitors can play music, it turns out!), right into the crib of our sleeping child.  Brian wasn’t impressed with this mom-move. 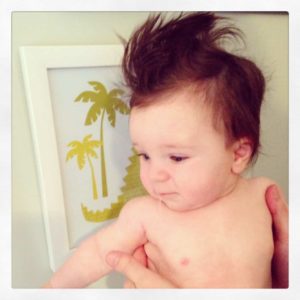 Round 3 (The Knockout Round)

If I’m being honest, the early stages of this round went to Nolan.  He was decidedly un-lamb-like at the onset.  It took us up to the first 15 minute interval (meaning a total crying time of around a half hour), before he was able to soothe himself to sleep.  I felt kind of bad for him but quickly brought my mind back to Mother Russia.  Over the course of the night we had two other mini crying episodes, one in which I broke “the method” and picked him up for a second so I could add a layer to his pjs. We had neglected to put on his wearable blanket, and it’s not a fair fight without the wearable blanket. That is just common courtesy. Once I put it on, Nolan was good to go.  The rest of the night was sound sleep for everyone.

All in all, sleep training has been an unmitigated success.  Nolan has learned to soothe himself to sleep.  He is in his own crib, with no nighttime feedings.  He is sleeping restfully.  And so are we.  We all won.** 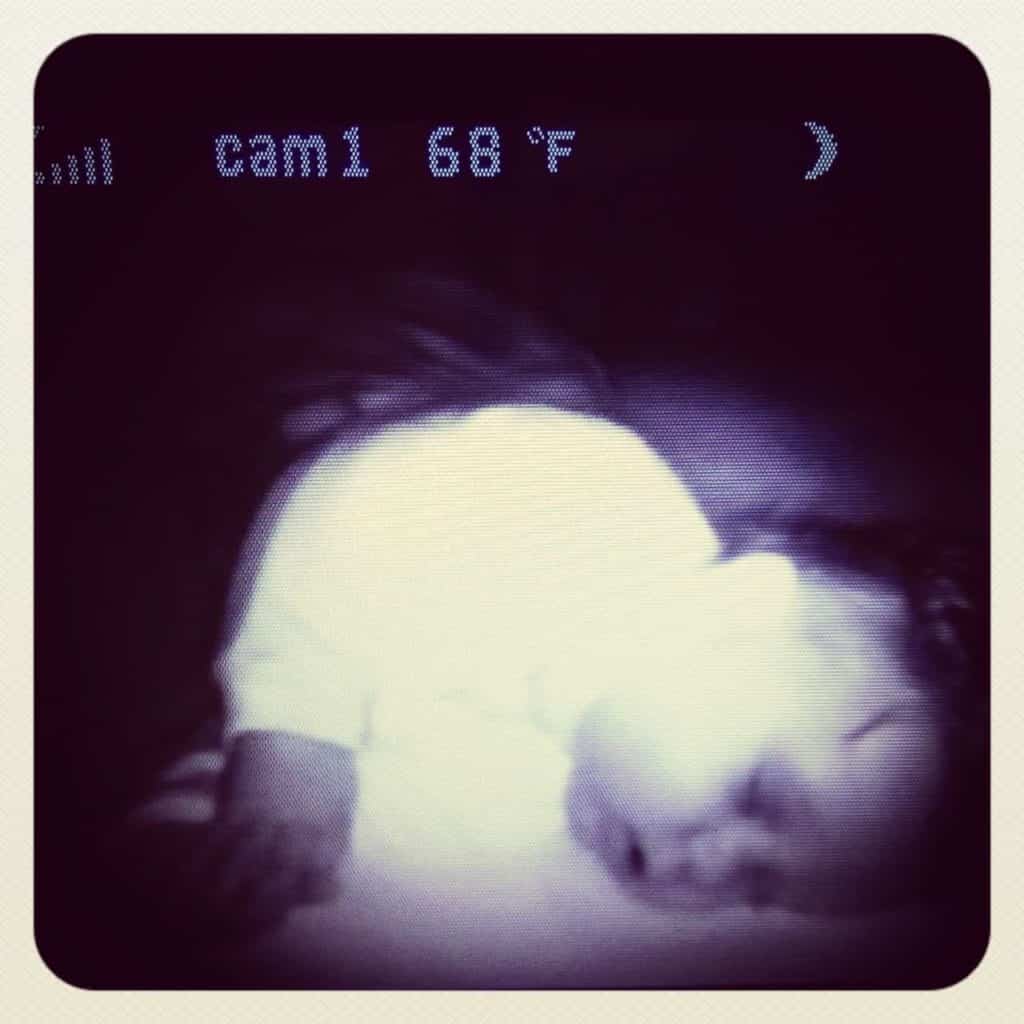 Anyone else have sleep training tricks or tips?  Horror and/or victory stories?  We won’t judge. Unless it’s really bad, in which case we will.

*I was not wearing sweatbands, but I like to imagine myself wearing them.

**I said that to be nice, but really, Brian and I won.