You are here: Home / All Posts / Advanced Maternal Age Here I Come! 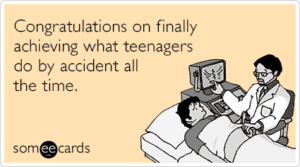 Sometime around the middle of my pregnancy with Nolan, my dad sought me out to offer the following consolation:

“Liz, I have a very interesting article for you on getting pregnant as an older women.  It’s very promising.  Hopeful even.”

“I already went ahead and checked it out of the library for you.  I’ll bring it right over.  Very optimistic stuff Liz.”  His tone was serious.  Urgent.  It had the gravity of a man who sees his chances of having grandchildren dwindling with every moment in non-procreation based activity.

I want to pause here to highlight a key piece of information.  Namely that as this conversation is taking place I am very pregnant already.  I did not have any particular trouble getting pregnant, at my not-quite-yet Advanced Maternal Age of 34 years old.  It is unclear why my dad felt compelled to offer this hopeful science up to me, but then again my dad is an unusual fellow.  (Case in point: This is a man who exercises his neck muscles using the LEG LIFT MACHINE at his gym.  Yes, that is correct, he sticks that strong old neck right where a normal person sticks their calves, and lifts away, straddling the equipment in what must be a provocative position to behold.)  But that is not what we are talking about.

The article by Jean Twenge that so pleased my dad was featured in The Atlantic, and it was indeed optimistic.  In a nutshell: older does not equal doomed.

“The widely cited statistic that one in three women ages 35 to 39 will not be pregnant after a year of trying, for instance, is based on an article published in 2004 in the journal Human Reproduction. Rarely mentioned is the source of the data: French birth records from 1670 to 1830. The chance of remaining childless—30 percent—was also calculated based on historical populations.  In other words, millions of women are being told when to get pregnant based on statistics from a time before electricity, antibiotics, or fertility treatment. Most people assume these numbers are based on large, well-conducted studies of modern women, but they are not.”

Check out the complete article (unless you are under the age of 25 or so, in which case, screw the article, grab a drink, and think about kids in ten years!).

Personally, I do not take offense, as some seem to, at being labeled as on the cusp of joining the AMA club.  I’m pretty sure it’s a compliment to be both advanced AND maternal at the same time!  Win win!  True, I don’t expect my AMA self to deliver a baby with the ease of a teenager (who, as I have seen first hand, describe their deliveries as if recounting nothing more trying than an ambitious pilates class.  Contrast that with moms my own age who describe their labors as unparalleled tales of horror and pain).  On the flip side, I spent the entirety of my twenties engaged in a state of freewheeling, unencumbered joy that I never could have had if I was a younger mother. I’ll call it a draw.

I’m not going to spend my time worrying about the fact that, yes, next time I (hopefully) get pregnant I will be of advanced maternal age.  I’m going to worry instead about how to encourage my dad to work out his neck on more appropriate gym equipment.  His current method is embarrassing the family.