×
You are here: Home / All Posts / Celebrating Easter for Fun and Profit 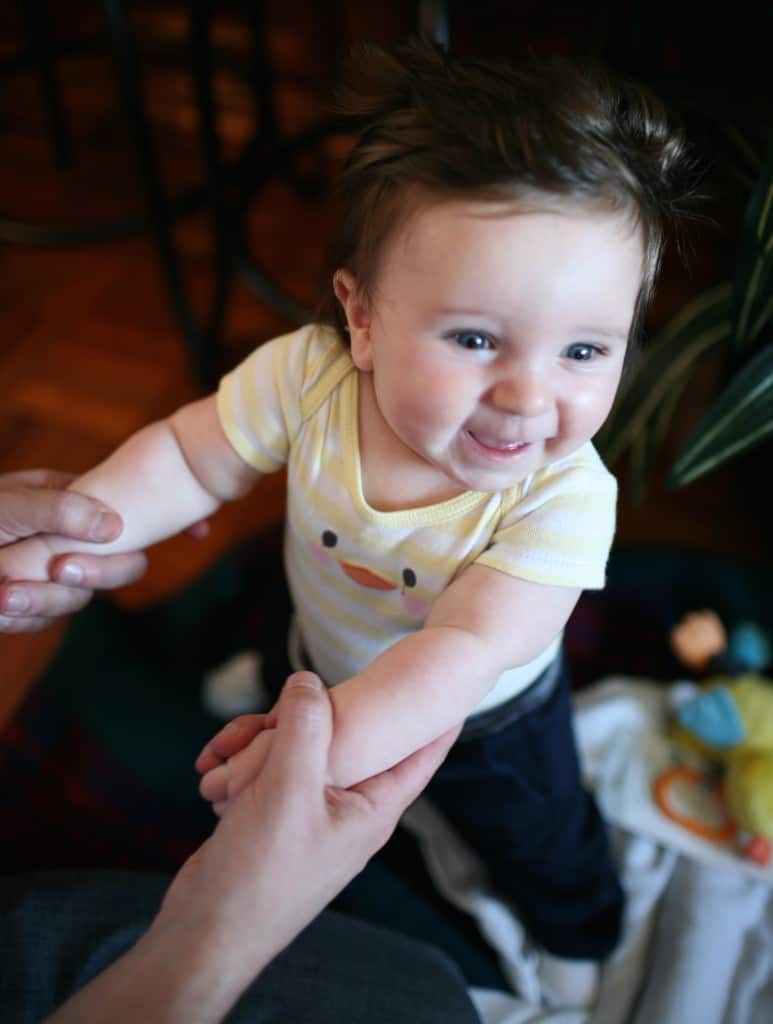 Since having baby Nolan I’ve often thought about the traditions that I want to make a part of our growing family.  And naturally, the source of my knowledge regarding family traditions is my own family. Drawing on your own family experiences when thinking about the traditions you want for your new baby will work in 99% of cases. In the other 1% of cases you will reflect on your childhood and realize, from your new perspective as a parent, that your family is bat-shit crazy. Pardon me, that was rude. I meant your family is clinically insane. And then you will realize that that’s the BEST type of family to come from because it makes holidays the most entertaining!

If your family is anything like mine, you are probably pretty exhausted right now, a mere 48 hours after the greatest holiday of the year. Beyond being intensely competitive, Easter is bizarre in a way that other holidays can only envy. Halloween’s got nothing on people in pastel seersucker suits celebrating the resurrection of Christ by taking photos with a giant BUNNY and then stuffing themselves with Cadbury eggs. And bunnies don’t even lay eggs!  Easter is the very best of holidays because in addition to being creepy, if you’re savvy and aggressive enough, it can also be both fun and profitable.

In my family Easter consists of three major challenges, which we find are easier to fit in if we skip church (those of you with a healthy dose of Catholic guilt and/or a sincere interest in mass – go to church! Fellow lazy Protestants and assorted others, save your energy for the competitions!)

Easter begins, of course, with the hunt for baskets. This is something that my sister Catherine and I have continued to partake in for over 30 years, even though the statute of limitations on basket hunting is age 9. Just two years ago my parents hid our baskets so well that Catherine and I ran around and around the house frantically, like a tandem of panicked squirrels that have found themselves inadvertently trapped on a boat. Our hunting skills were so poor that we needed hints from my mom, which is pathetic. But really, good on mom for proper hiding! When Nolan is old enough to crawl I’m going to start hiding an Easter basket for him in a locked safe, which he will not have the manual dexterity to come even CLOSE to opening, just to teach him a lesson about perseverance and the spirit of the holiday.

The baskets are really just a teaser for the main events, of which there are two. First and most essential is the egg-cracking competition. For those of you who read my earlier post, Does Having a Baby Make You a Woman?, I discuss how this particular challenge can go terribly awry with improper egg preparation.

You must BOIL the eggs, and I mean REALLY BOIL THEM, before you move on to the decorating phase. Otherwise you end up with an egg yolk bloodbath on your Easter dress. In our family, my dad handles any and all egg decor. For years Dad has individually named each egg, in the spirit of the naming of a racehorse. He often gives the eggs borderline inappropriate names, which we have never quite figured out. It may be accidental. I say this because my dad’s running club holds an annual footrace that they call the “Summer Hummer.” Nobody indicates that this is in any way a joke. My dad invited a random young female runner to the “Summer Hummer” last year and I was surprised she didn’t call the police. I think you see my point.

This year, inexplicably, several eggs were named after our deceased pets. Two examples are shown below, but there were others. It’s hard to overdo such a lovely theme. 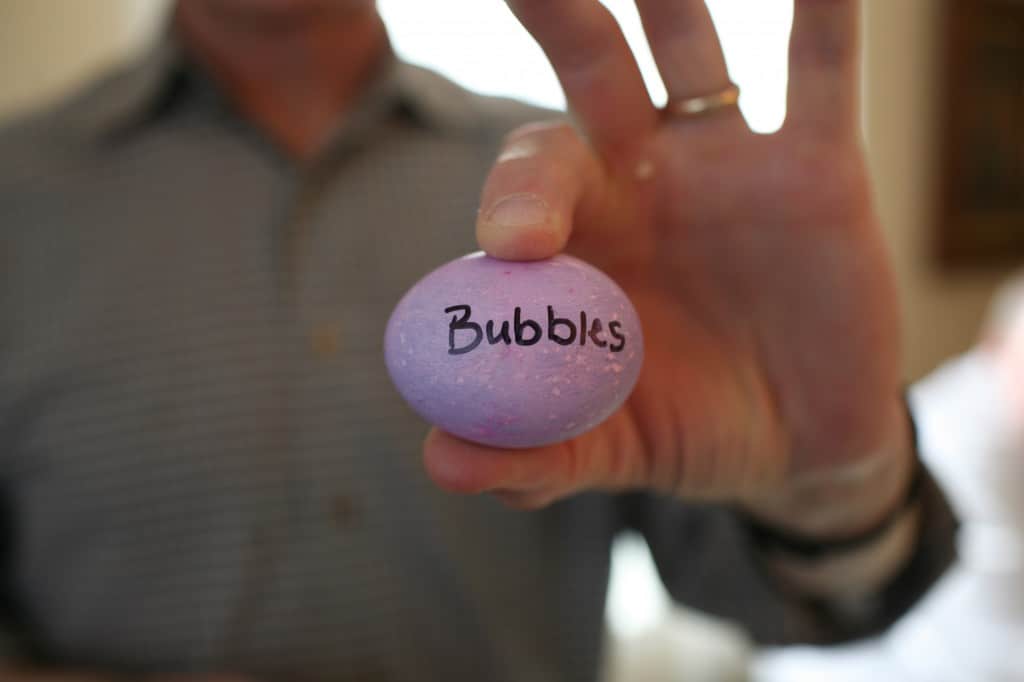 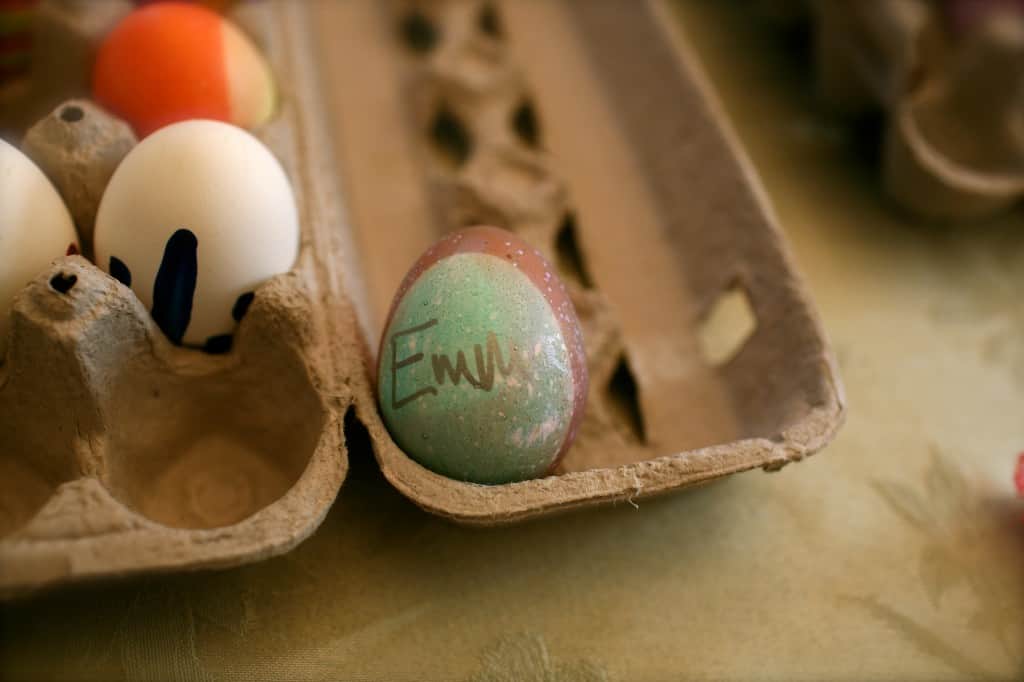 Here I would like to take a brief time out from Easter talk to discuss Emma our dead hamster. Emma had an uncanny ability to get out of her cage and into the walls of our house.  This caused great distress for me as a child, and also caused my dad, in a desperate act of fatherhood, to cut a huge hole in the wall to try to retrieve my missing pet. Interestingly, the hole ended up being in the shape of a giant cross, necessitated by the structure of the wall and the location of the hamster. We called this hole “The Shrine of Emma,” with its overtly crucifix-like appearance. Now if THAT isn’t in the spirit of Easter I don’t know what is! My dad succeeded in saving Emma the first time, but she pushed her luck on her next escape. Strangely enough my parents were not willing to continue cutting gaping holes in our walls to save my little rodent. So when Emma packed her bags the second time it was her last. We found Emma’s body many years later, rolled up in an old rug in our basement, flat as a pancake.

Now back to the topic at hand. Egg cracking entails selecting an egg, of which you are the “rider” much like a jockey rides a horse. Your job is to crack your opponent’s egg. You have two chances to accomplish this, as your egg has two sides with which to compete. You and your egg can go into battle in the traditional manner, as demonstrated here: 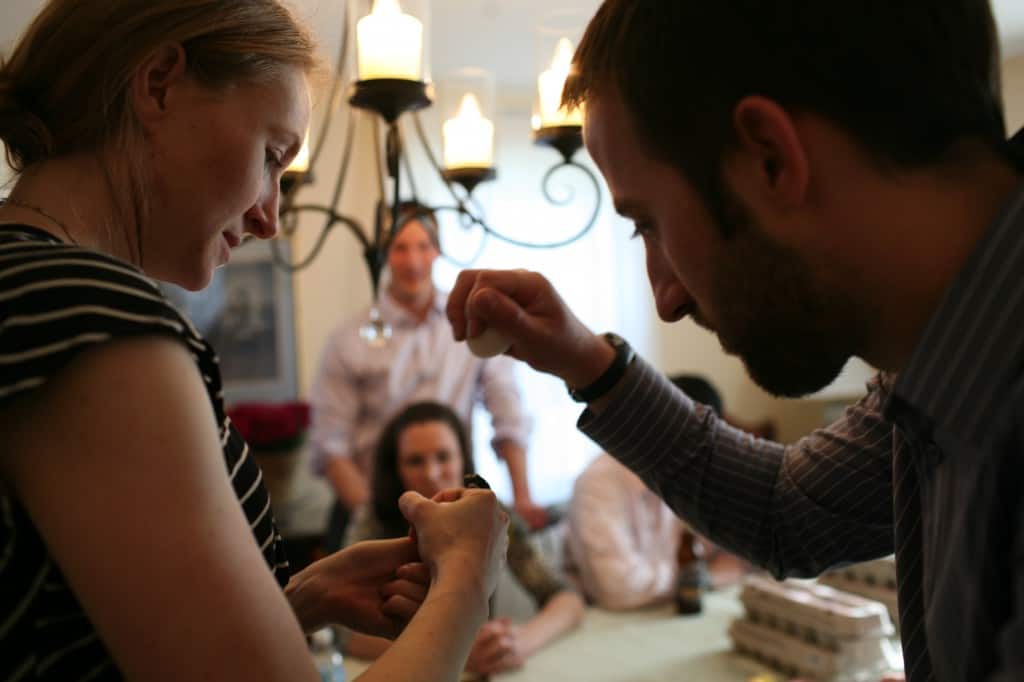 Alternatively, you can smash eggs Greek style (here is the Urban Dictionary definition of Greek Style, which my mom, of all people, alerted me to). This definition has NOTHING to do with how we smash our eggs. In Greek Style as it RELATES TO EGGS, the eggs go head to head, mano to mano, much more aggressively than in the traditional version. It looks more like a fist bumping of eggs. It is messier and riskier. And depending on your personality type, more fun. 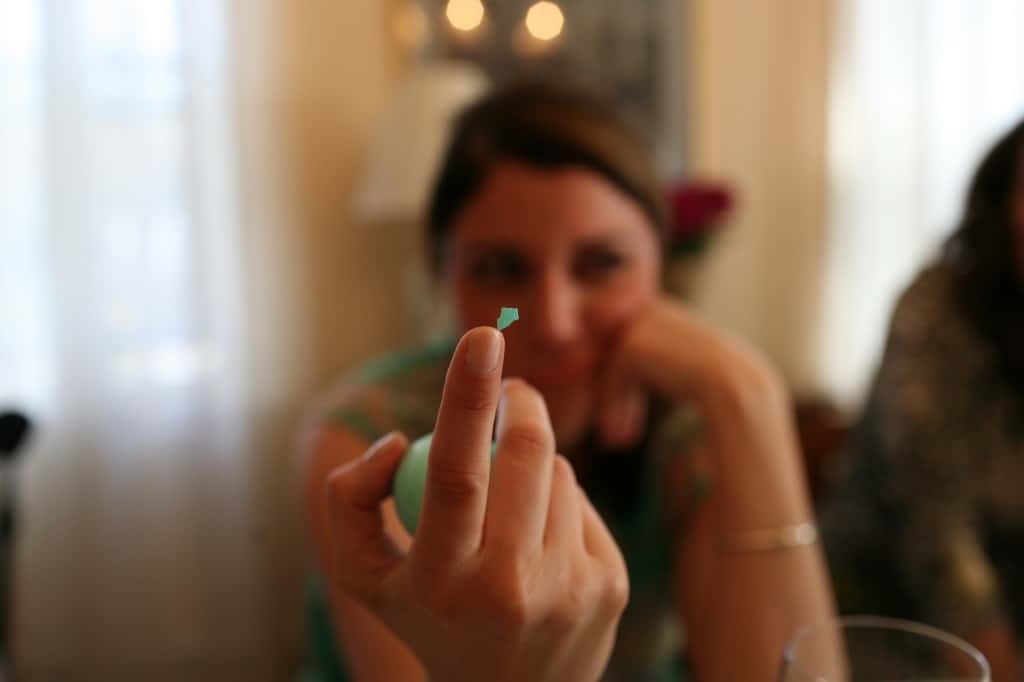 Egg shard in Catherine’s finger. Such dramatic injuries are uncommon in traditional egg cracking. They are prevalent in Greek Style. 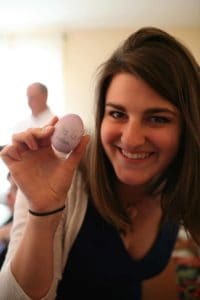 2014 Two time egg-cracking champion, Toni. She has a slightly unfair advantage being Greek.

If your egg has at least one remaining side, you advance to the next round, and one egg ultimately emerges victorious from the entire table of players. Picture the intensity of March Madness consolidated into one Sunday. Exactly. 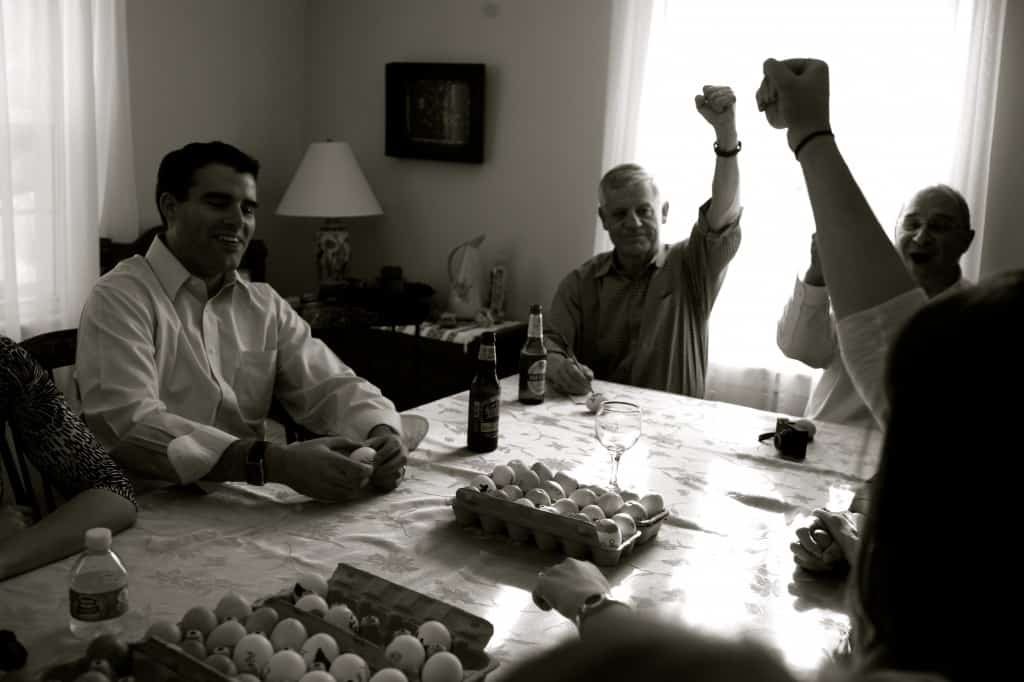 My father records the results of the annual cracking of the eggs in a very special “ledger,” as shown below.  The Gardener’s Journal also contains such varied family data as the date of my birth (which held but one line, “August 4, 1979 Elizabeth Curtis born) and also a thorough account of the day my dad sold his old Lawnboy. The Lawnboy entry is far more detailed than my birth entry: “August 5, 2006 Said goodbye to 25 yr old Lawnboy. P.S. New Mower cuts great, Powerful, clean cut.” 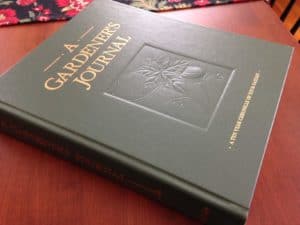 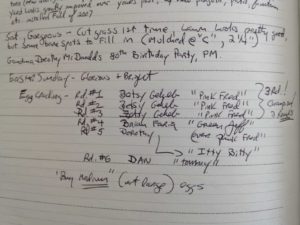 Where the egg cracking competition gives you a shot at glory and the opportunity to be immortalized in the Gardener’s Journal, the final event, the egg hunt, gives you the chance to make some cash.

In some ways a traditional activity, the Curtis family likes to amp up the hunt to new levels by filling upwards of 80 eggs with a variety of treats, including car wash gift certificates, candies, movie theater passes, and straight cash! It’s a veritable goldmine, and hunters behave accordingly.  The hunt starts at the far end of my parents yard, in a full blown footrace to the house. This year some competitors tried to gain entry to the house (aka hunting ground) via an unauthorized entrance and were promptly sent away. I myself was caught red handed with an off-limits egg (that had been reserved for the only child player) and was publicly shamed. “Hells to the no!” the angry mob shouted at me. Oh, if this wasn’t clear, the participants in this egg hunt all range in age from their late 20’s to mid-30’s, with the sole exception of one six-year old who is both drawn to and terrified of this event. The game is so competitive that a few years back one contender, frustrated by his lack of eggs, took my parents’ checkbook instead. *This was only kind of frowned upon.* The winning couple this year made $53 in the time it takes to lace a bonnet. 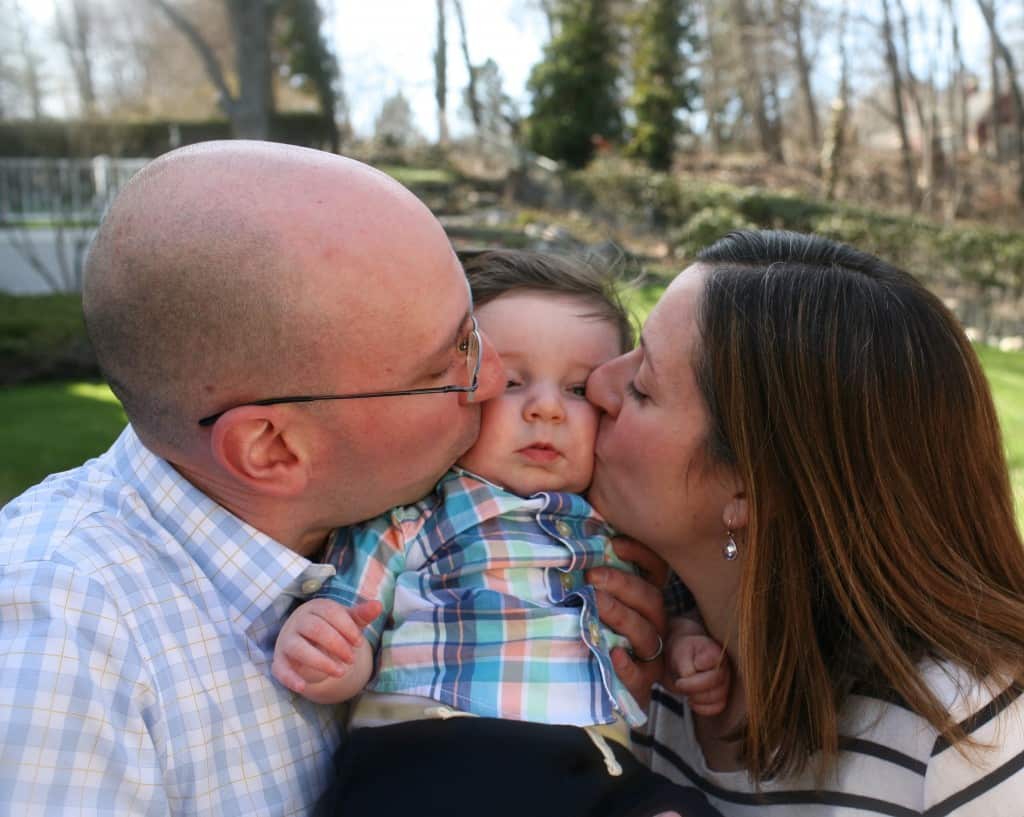 Nolan was too young this year to really enjoy the festivities, although he did seem to enjoy soiling his Easter clothes (and by “Easter clothes” I mean clothes other people gave to him on Sunday, since I forgot to buy him Easter clothes). Next year, when his skill set rises to a level slightly higher than that of a meatloaf, I will begin training him to compete. I would start now but the kid can’t even find his thumb with 100% accuracy.

Have any holiday traditions that you want to pass on to your child? Think there is a better holiday than Easter? Comment below!