×
You are here: Home / Parenting / The Friday Five (Things I Love This Week) 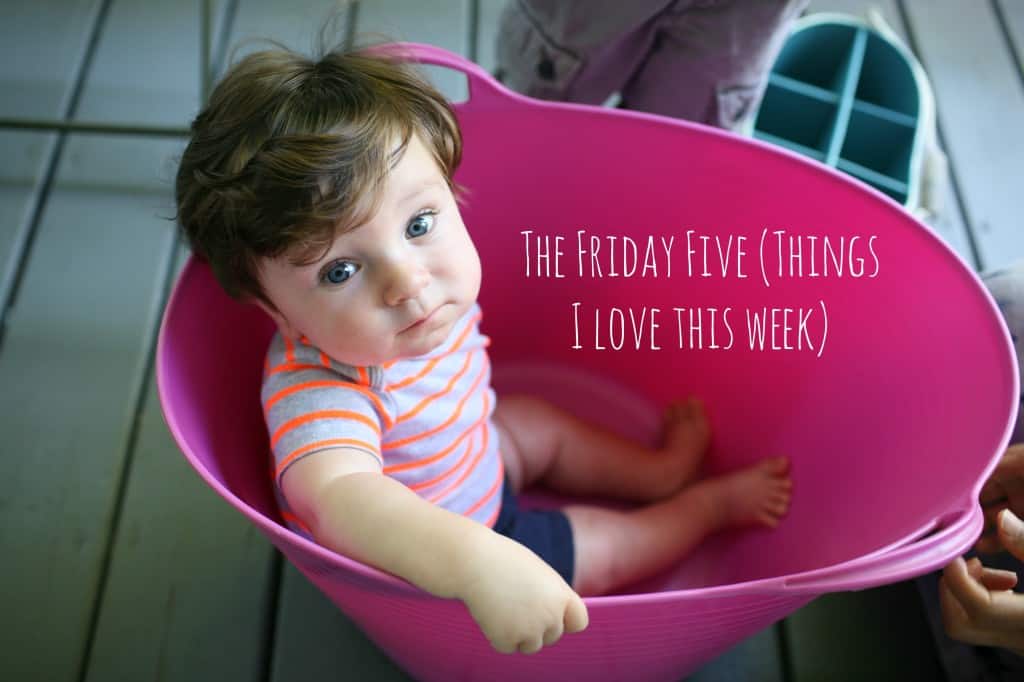 Aaaand we’re back with The Friday Five (Things I Love This Week).

One thing that Nolan did NOT love this week was my accusatory letter to him, even though he had to acknowledge that it contained more than a grain of truth. It contained a sack full of grains of truth.

Nolan has asked me to let you know that he will indeed be responding to the “slander” (his words) and presenting me with a rebuttal next week.

Like loyal Market Basket activists, he’s asking you to keep the faith that he will prevail in our debate. He’s not looking for a boycott on the blog, because he got a haircut and is eager for you to see the debut of his new look, which will come sooner than his rebuttal, because he is a painfully slow writer (my words).

Without further ado, The Friday Five (Things I Love This Week).

You guys, I have fans! For real. I discovered this recently at a party for my friend Shauna. Shauna told me that her friend Sarah would be coming and that Sarah was excited to meet me, as a regular reader of the blog.

So naturally I recognized that I would need to blow Sarah’s mind by being dazzling in person, which prompted me to put on my best slim-at-the-ankle maternity pants (guys they look just like skinny jeans but have an elastic waist! Sure they’re for pregnant people but I’m never throwing them out). I figured these pants would say to “my fans” – sure I’m a mom, but I’m totally cool when at a bar!

Then I got a little drunk.

Finally I met Sarah, who was lovely, and she told me that she had thought in advance about what she was going to say to me when we met. I mean, no big deal, but that pretty much makes me famous.

Then this photo was emailed to me the other day, from actual fans who I DON’T EVEN KNOW IN REAL LIFE!

I mean I would welcome this photo from anyone, but coming from people I’ve never met was mind-blowing. It makes up for the fact that I haven’t become wealthy off the blog. Well ok that is actually a total lie, it really doesn’t make up for my lack of wealth. BUT, it sure is encouraging and makes me feel like a million bucks, without actually having a million bucks.

Obviously I’ll be having this printed, turned into a golden medallion, and permanently mounted in my living room. Suffice it to say, I love fans! 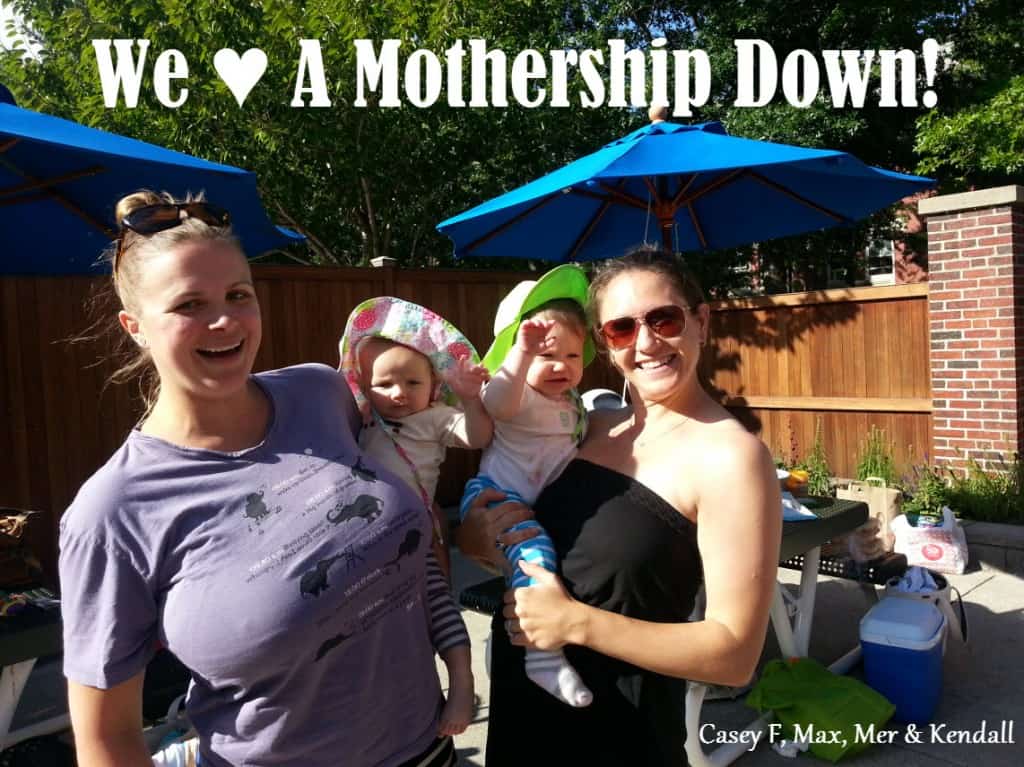 Sunday was my first ever fantasy football draft, and to say that I know less than nothing about a draft would be an understatement. However, I’m a lifelong joiner and I’ve been assured that being in this league will make me enjoy my Sundays very much, and who wouldn’t want that?

I loved the draft! This is a family league (my family and our long-time neighbors), and watching my buddy Ben get the group of us organized was like watching someone try to wrangle a herd of stray cats.

You’ve never seen a roomful of people with less knowledge about football, drafts, and technology in general assembled together trying to log-on to ESPN. You could probably find a less adept group if you went to an elderly housing complex, but otherwise you’d be hard pressed.

First thing I learned in the draft: D/ST does not stand for Dashing/Stallion, which was my initial guess. It stands for – wait for it – Defense/Special Teams.

This is a key point.

I had some other difficulties as well. I accidentally drafted a guy who is known to have hit his wife, so obviously I don’t want him on my team. But I had no lawyer working with me during the draft, and was unable to cut him.

Oh yeah, I also drafted a “free agent,” and it turns out that means he’s not even on a team! So who knows if he’ll be playing. I also neglected to see when my players had “bye” weeks, so for all I can tell nobody on my team will actually be playing when I need them.

I think I’ve lost the plot. My point is this: the draft was a blast, I am clueless, and I have money riding on the season ($10!!). My enthusiasm for football and other fall classics is mounting. Bring me a Pumpkin beer. 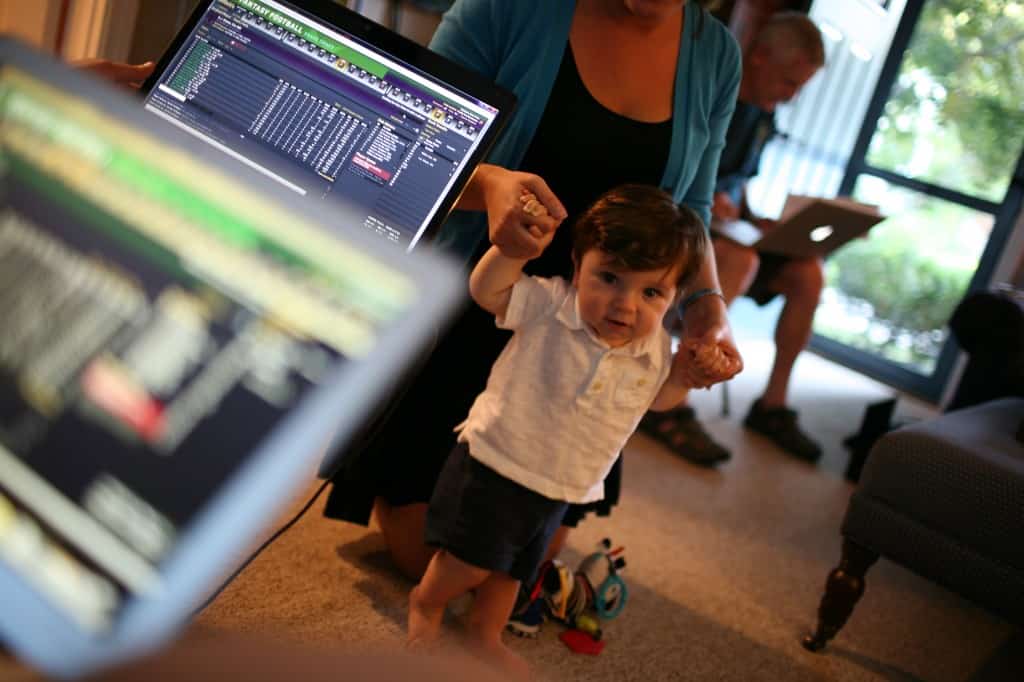 Nolan at his first ever Fantasy Football draft.

I’m pretty sure I love this kid. I mean, I hope if I someday announce to Nolan that a sibling is on the way he will have a similar reaction to Tré. It’s touching, it’s sweet, it’s heartwarming. Oh wait, I take it back, it’s none of those things. But it IS really funny.

As a hip and “in the know” type of mom I’d heard a lot about this book, All Joy and No Fun

. Jennifer Senior flips the traditional look at how parents shape their children and instead examines how children shape the lives of their parents. Boom.

Senior points out that “parenting” as a verb – as something you could do versus something that you can be – is a new notion. What is clear is that raising children is not what it used to be, for better or worse, and that we as parents are tasked with something that generations before us have not been – that is, to prepare our kids for a future that is vague, with no clear sense of how best to do so.

Basically, we’re screwed. Kidding! I’m actually really loving this book, and I would recommend it if you’ve ever gotten the sense that we are the blind leading the blind right now when it comes to raising our kids.

5. Bright Starts Having a Ball Get Rollin Activity Table

Wow that name is a mouthful. Also, the way Nolan is using it is literally a mouthful, as evidenced in this photo: 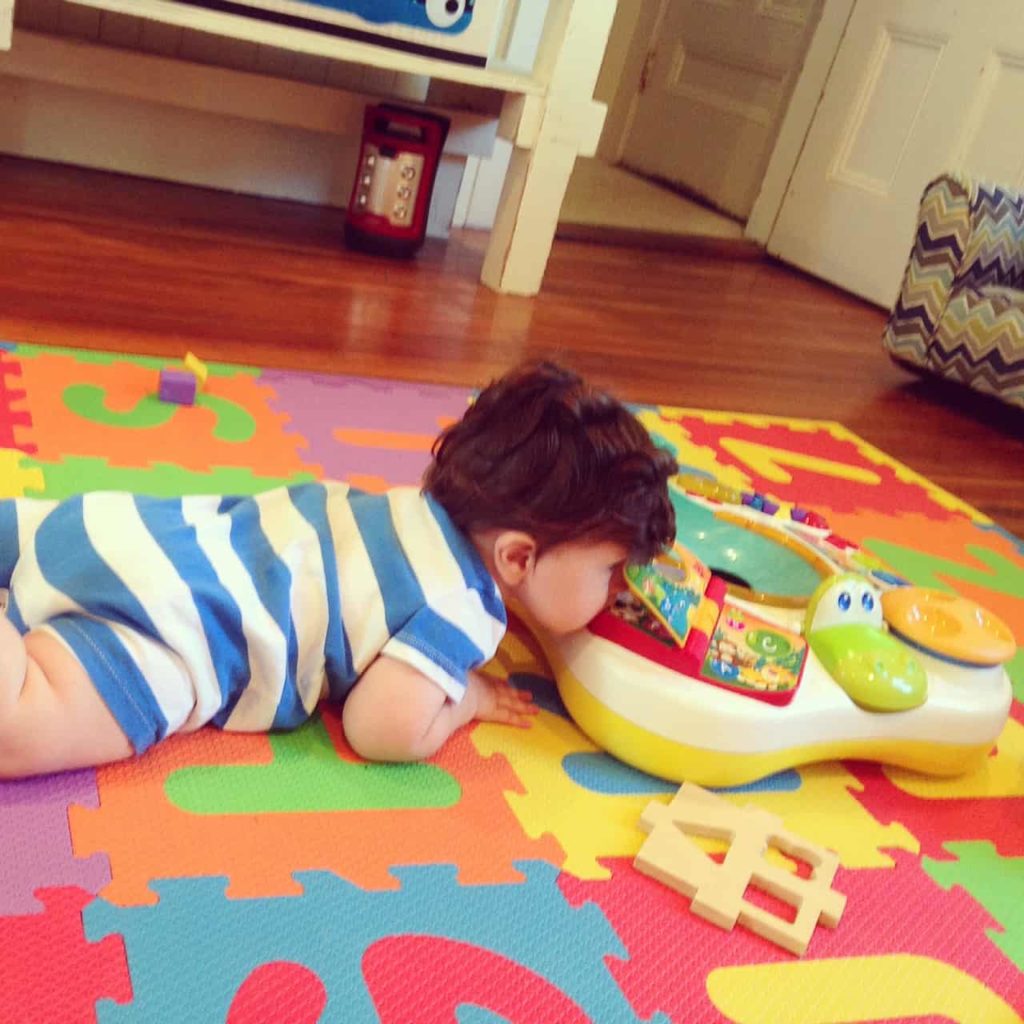 That’s right, Nolan is laying flat on his stomach and sucking on the table. So close Nolan, so close. As you can see in the image below, the table actually has legs, and babies with a center of gravity superior to Nolan’s are able to stand up and play. Happily for us, the legs are removable, which allows for slacker babies to move at their own pace. 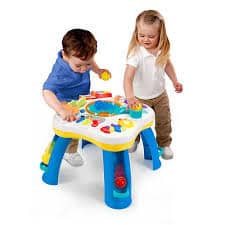 We picked this activity table up about a week ago, and it’s a hit! The table top is kind of like an infant version of skeeball, with a hole in the center that lights up and makes noises when you roll a ball into it.

I’m proud to say that Nolan figured this out right away! I can’t wait to get him to the arcades. He is crushing this table, basically, and once he can stand it will be complete and total dominance.

Oh, and the table has parts that spin and open and shut and rattle and roll. It’s a blast. A BLAST! More for Nolan than for me, if I’m being honest.

The only negative so far is that without the legs the balls just collect on the floor under the table. But since most of your babies are athletes you will probably be able to attach the legs, in which case this table is sweet.

And that concludes The Friday Five.

Please feel free to offer your comments and/or send me fan photos for above my bed. I’m happy to redesign any and all rooms in the house to accommodate the influx of imagery. Oh, and as an aside, we have a general contractor coming over today to give us some estimates on home renovations! Wait until you meet remodeling Liz, she is out of control.

Have a great weekend!