×
You are here: Home / All Posts / How to Inspire Confidence as a Babysitter 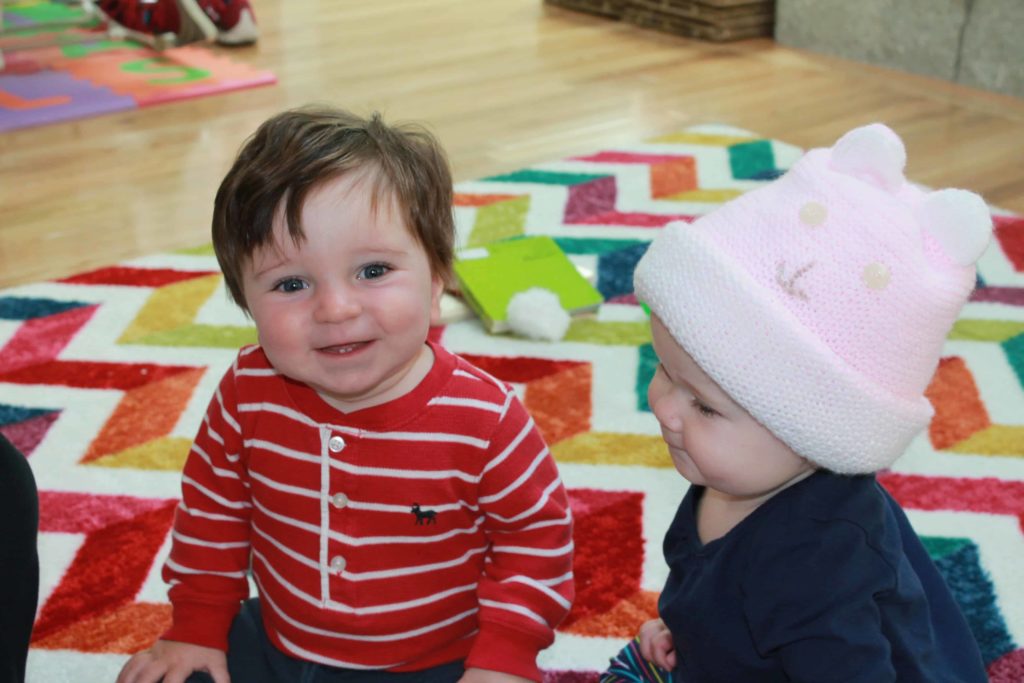 As I was working on this post I asked Brian if I should title it “How to Inspire Confidence as a Babysitter” or “Babysitting Bloodbath.” I went with the former, but the fact that both were appropriate titles is innately concerning, no?

Let me set the scene: Last Friday some friends from our prenatal class asked me to babysit their little boy so that they could have a rare date. I like this couple, and I like their baby, and I had no plans so why not? Why not. I am the mother of a toddler, after all. I’m not some mother of a newborn who can’t manage her shit. The sky’s the limit, I thought, when it comes to my ability to monitor my own child and countless other children simultaneously. Ok one other child simultaneously. This should be no problem, I said to myself. Practice for when Nolan has a sibling.

I was confident. I was Maria Von Trapp minus five of the children and the Nazis.

It turns out my confidence was unwarranted. One thing I hadn’t taken into account was the fact that Nolan’s newfound mobility makes monitoring him a completely different experience than it had been for the first 14 months of his life. During those earlier months, monitoring him was akin to monitoring a Honey Baked Ham. Little movement, delightfully sweet smell. Now he is a ham balancing on tiny little Geisha feet with zero sense of gravity, balance or personal safety. I don’t think I have to spell out that that’s the very worst type of ham.

Anyway. Before the appointed babysitting hour I was rushing around trying to get cleaned up so that when my friends arrived they would feel good about leaving their most precious cargo with me. I was the picture of competence, by which I mean that I was wearing pants and not pajamas, and that the house wasn’t on fire.

Unfortunately for me, Nolan decided he wanted to do some last minute primping in the bathroom at the eleventh hour. Fine, I said. Fine. I understand the need to look good for guests, even if I don’t act on it. So could I really blame my son for wanting to put his best foot forward? I could not. But could I blame my son for not knowing how to put one foot forward in front of the other in a pattern (popularly called “walking”)? Yes I could.

Nolan is both new and terrible at walking. It’s his passion and yet….and yet he sucks at it. He falls somewhere between 10,000-20,000 times an hour. He cannot yet stand up OR sit down on his own (WTF?!) but once on his feet he is able to run like a drunken colt navigating an ocean liner that has hit massive swells. He’s a kamikaze with vertigo and legs made of dough.

So it should have come as no surprise that mere moments before our guests were slated to arrive, Nolan torpedoed his way headfirst into our toilet lid (I think he was running toward the hairdryer for a last minute blow out and missed). 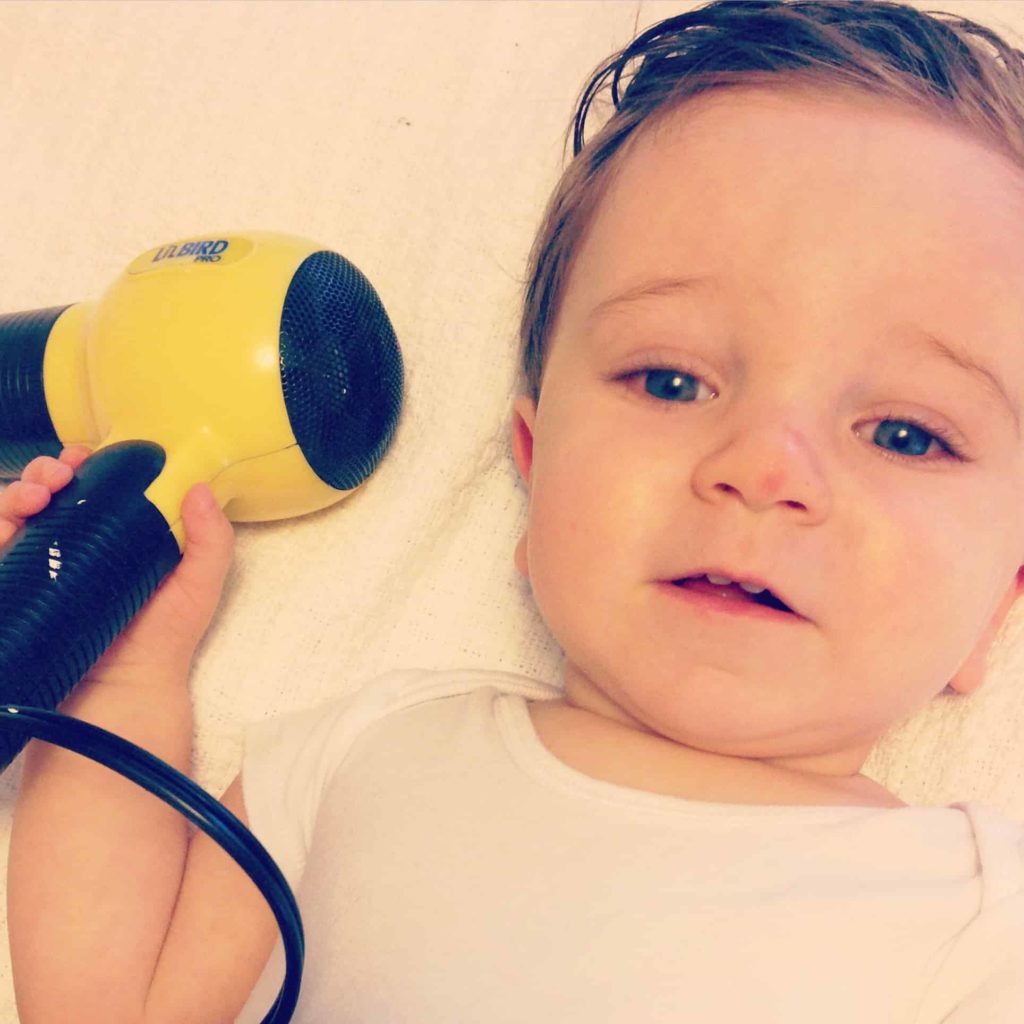 I heard the now familiar THWAK and subsequent yelp. My motherly instincts kicked in (yes, I know that they didn’t kick in when they should have, which was before he torpedoed into a toilet). I ran to my child and scooped him up into my arms. He melted into me, seeking comfort in my bosom. Ok not exactly, but I’m creating a warm picture of domestic love for you. I cuddled my baby, trying to calm down his sobs before the doorbell rang, which I knew would be happening any second.

I pulled my little Nolan off of me to give him a kiss, and then WHAT?!?! I was staring into the face of an episode of CSI. Nolan’s face was covered in blood, his onesie a veritable crime scene. And because I had ever so maternally cradled him, so was my sweater. There we were, Madonna and Child in a Bloodbath. It was gross. And not only was it gross, but I am willing to venture a guess that seeing both the baby and babysitter covered in blood is not the best way to inspire confidence in one’s ability to provide adequate supervision.

The wound itself was a simple bit lip, the actual damage to my child minimal. But the damage to our credibility? You be the judge.

The doorbell rang within 2 minutes of the carnage, which was not enough time for me to change either of our outfits. I was forced to answer the door looking like an extra from The Sopranos, and quickly excused myself to go change my shirt, since I figured the longer I sat there chatting caked in blood the less likely I was to be allowed to babysit.

Next time I get a babysitting gig (Which, can we just pause here a minute? I have a masters in social work. I’m 35 years old. And I’m scoring babysitting gigs on the side now? Good Lord) I will make sure that for at least 30 minutes beforehand I keep Nolan and his little yarn legs in a padded room. We cannot suffer this embarrassment again. 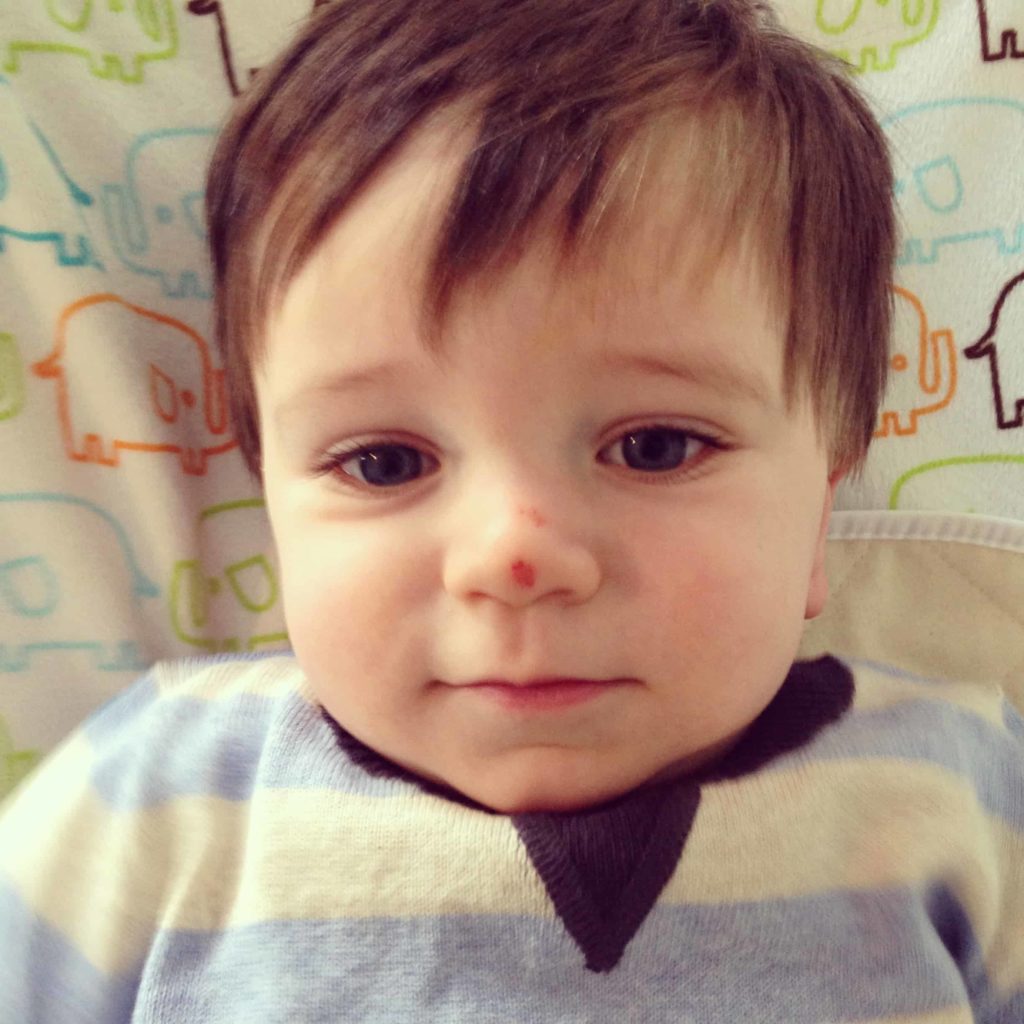 Nolan’s nose is taking the heat from his new walking skills. It would help if he knew how to sit down and didn’t just fall directly on his face every time he tried to pick something up.

This series of photos of Nolan and his friend Carys cracks me up! I posted a few of these on Facebook the other day, but here is the full display. I like to call it “Aggressive Baby Love.” 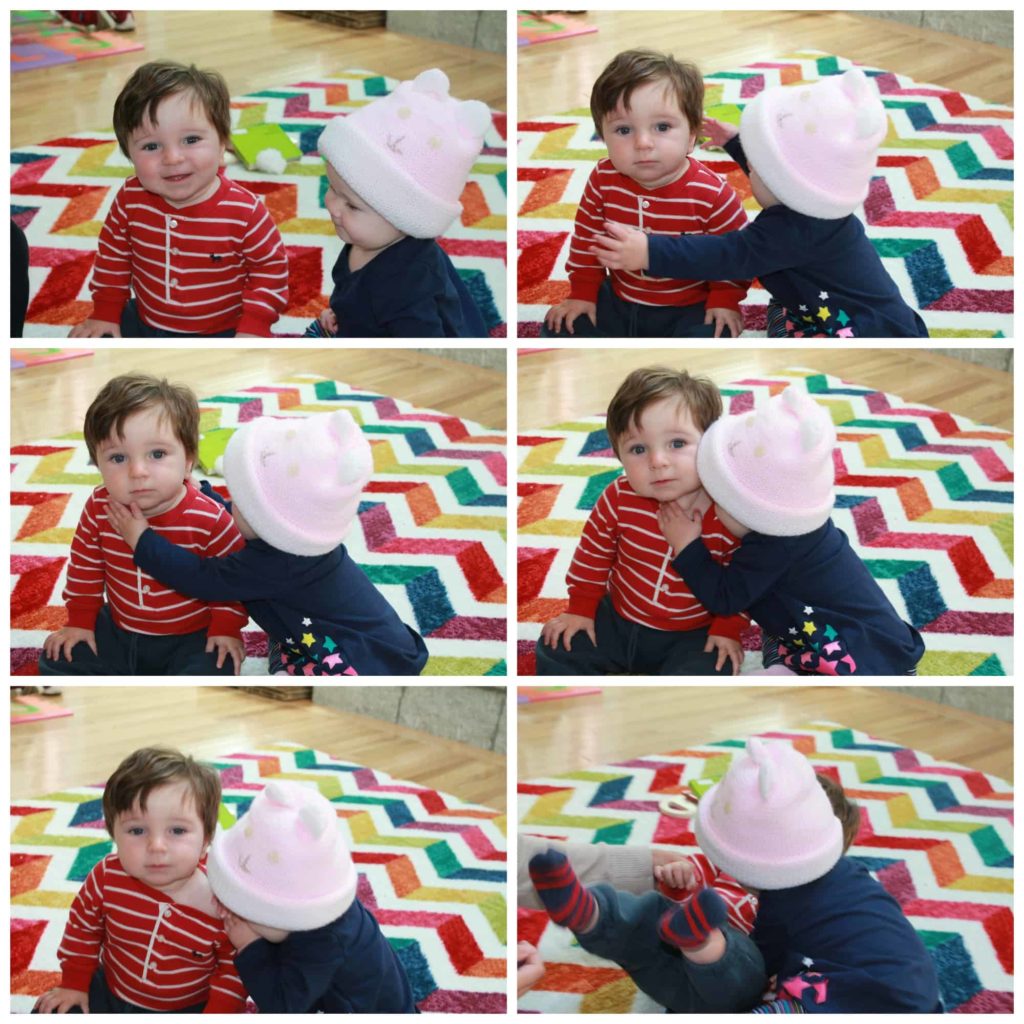 Also, on a totally unrelated note, I bought a treadmill! Some of you might recall that a few months ago I wrote a post called The Battle of the Bulge questioning if it was really worth it to try to get in shape when we want to have more kids and I know I’ll be letting myself go all over again when that happens. People had a LOT to say about that, mainly: “Get in shape you lazy slug!” And I myself have come to the same conclusion after an extended period of sloth. I’ll probably put together a series of fitness videos featuring Nolan and me doing some light treadmill dancing in matching mother/son spandex soon.