×
You are here: Home / All Posts / For Saoirse: Mom-Genuity Provides Comfort in Daughter’s Cancer Battle (Here’s How You Can Help)

“Motherhood is no joke. Except when it is.” That’s the tagline for this blog, which, as you know by now, is a humor blog. Sometimes, however, you come across something that isn’t a joke. Something that deserves your attention. So today’s post is a different kind of post.

A few weeks ago I was contacted by one of our readers, Kezia, about doing a guest post for A Mothership Down. Kezia has a story to tell, and she is a mom on a mission. It’s a mission I support, and even though the topic is heavy, I wanted her to have the space to spread the word about her family and her cause here, if that will help. I hope it helps. 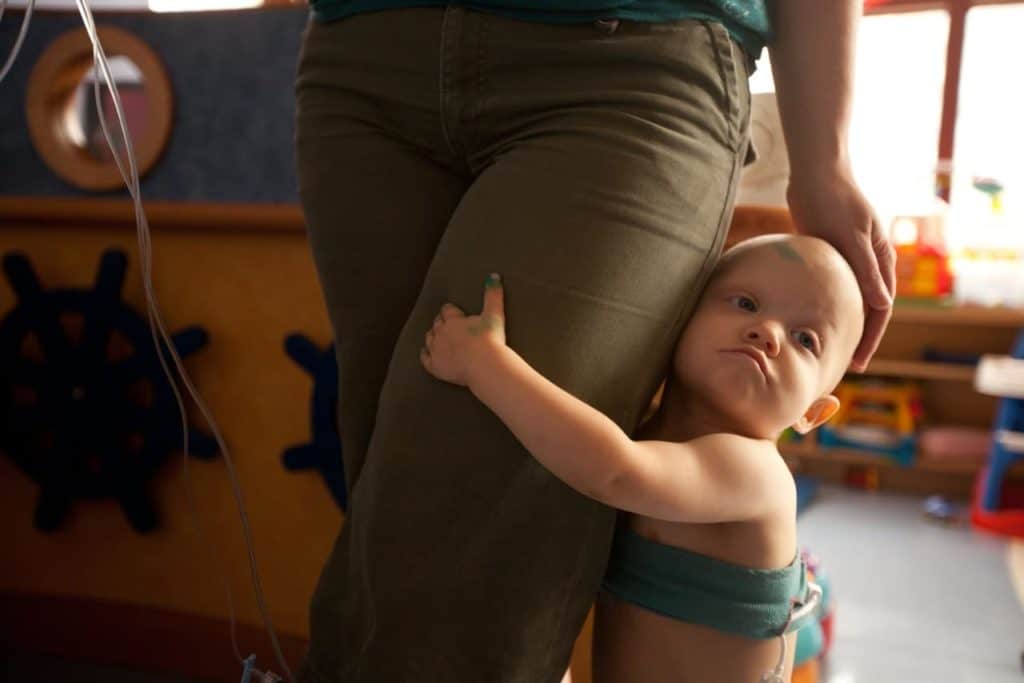 Having cancer sucks. Having a baby with cancer sucks. Having cancer while your baby has cancer… well, really I should have gone and played the lottery.  The really annoying thing about having cancer at the same time as your one year old is that you need to sleep for three days after chemo, but that one year old can get five straight days of toxic chemo and never miss a skip in her step. It really is quite maddening for the mom. 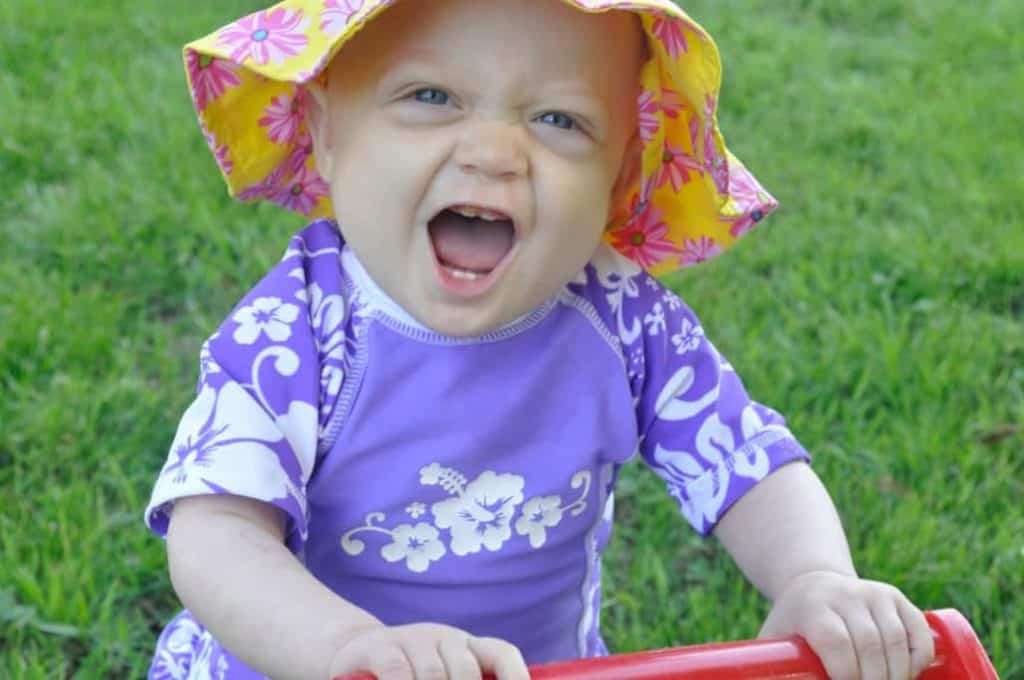 In 2011 my daughter, Saoirse (pronounced Seer-sha, Gaelic for Freedom) , and I battled cancer at the same time. I was diagnosed in January (Hodgkin’s Lymphoma), and she was diagnosed just over 3 months later (Neuroblastoma). A healthy family until then, we were shocked, devastated and numb. Of course, we knew that we had to fight with everything we had to get better. (My husband would tell you the beginning was a literal fight – I HATED needles, and doctors, and hospitals….)

With a lot of help, and a little creativity, we managed to get things sorted out slowly. We entered our new “normal” of chemo schedules, side effect management, and buckets of hand sanitizer. We distracted ourselves when we could by doing fun things, and spending time together as a family, and we forged ahead knowing that someday it would all be over. (To read more about our journey through treatment, please visit my blog – New Mom…New Cancer)

For a while, we were doing great! I went into remission, Saoirse was responding well to her treatment, and we were on our way to being a cancer free house by the end of the year. But cancer doesn’t like to be beaten, and just weeks after her doctors told us that Saoirse too was cancer free, we were told by another hospital that she had relapsed. Six weeks later, she died. Life stopped as the world kept spinning around us. 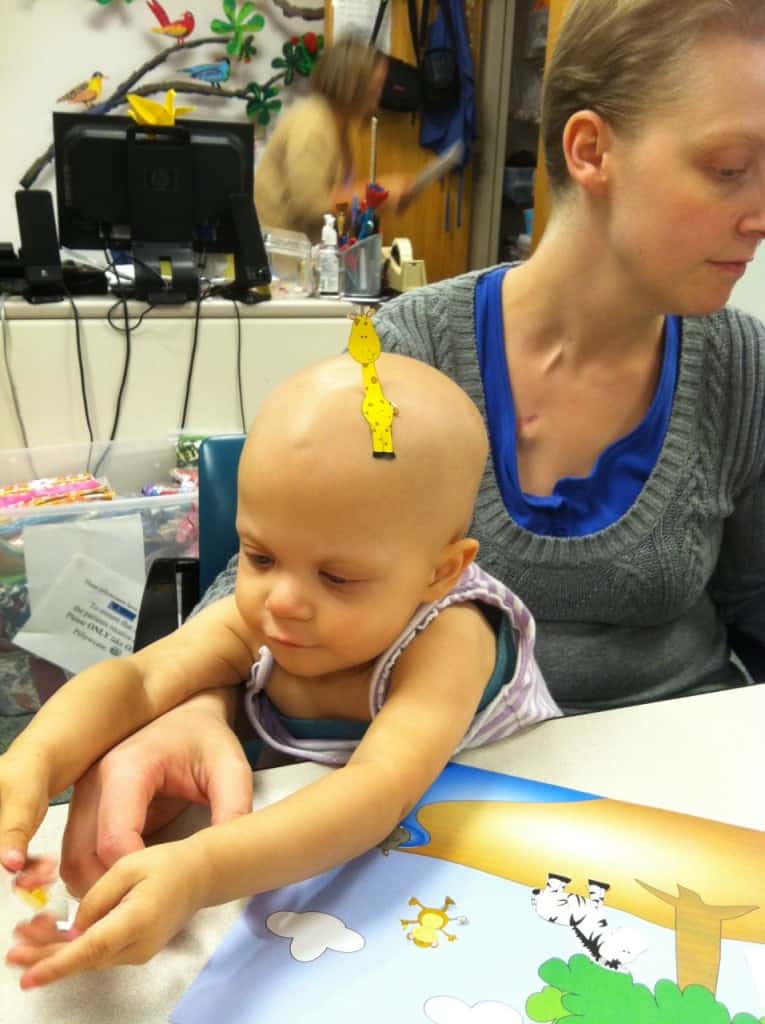 After weeks of avoiding eye contact with anyone for fear of the “pity” face, and after being stopped too many times by strangers in the mall with well meaning phrases like, “I know you don’t know me, but I’m sorry for your loss. Would you like this extra AC Moore coupon I printed?” we needed to escape. My husband and I went to Ireland and wandered aimlessly trying to figure out what we could do that would give meaning back to our lives. And as the fog in our brains began slowly to clear, we knew that we had to help those who, like us, were facing challenges they never thought they would.

When Saoirse was in treatment, she had external catheter lines (called PICC and central lines) placed to administer treatment. These lines allowed us, and her nurses, to give her medications and draw labs without always sticking her with a new needle. Being 11 months old, Saoirse decided that these lovely appendages were rather nice to chew on and use as drum sticks – posing a major infection risk to her (although it did look rather fun, and was certainly convenient being attached to her arm). The nurses taped them to her arm, causing a rash and major scratching, which didn’t at all seem like a viable long-term solution.

Using a little mom-genuity, I made her a sleeve, and later a chest wrap, that held her lines, kept them clean, and left her able to play and be herself. They became quite popular with her nurses, and other patients on the wing at the hospital. At the time, we didn’t have the wherewithal to do anything other than make a few for the kids we knew. But now, we have the opportunity to do something that will help every patient – kids and adults – who have to deal with PICC and central lines. Because of Saoirse, we can help all of these people

In October 2012 we started CareAline Products to do just this! We found a way to honor Saoirse and help people who are going through exactly what we experienced. We jumped in with two feet; pushed through grief, closed doors, mistakes, challenges and miles of red tape. We entered the medical industry with no idea how to do it (not bad for two art school graduates). My simple solution “arts and crafts project” is now being coveted by nurses and patients and presented to hospital purchasing departments and distributors.

We still have a long way to go to achieve what we set out to do –make sure that every patient with an implanted line has a sleeve or wrap to keep him or her comfortable and safe. While we face challenges every day, we know that CareAline will improve the quality of life for people who truly need it the most.

Cancer still sucks. This year I found out my Hodgkin’s is back, and this time I have a HEALTHY one year old to chase and soothe (I’m telling you, teething is so much easier with narcotics). But Saoirse’s strength through her own treatment inspires me to push through and beat cancer yet again. Sharing her story helps her live on with us every day, and she pushes us forward, even when we hear the “no’s” and “maybe later’s.” We have taken all that cancer has thrown at us and tried to turn it into something better. And although Saoirse can’t tell us herself, I’m pretty sure she’s proud of her mom and dad.

Want to help us help even more patients? Visit our Indiegogo Page to learn more about what we do, share our story with your friends, and donate to help us reach our goal of helping all patients living with extended treatment!