You are here: Home / All Posts / Rocking the Red Carpet at Mom2.0 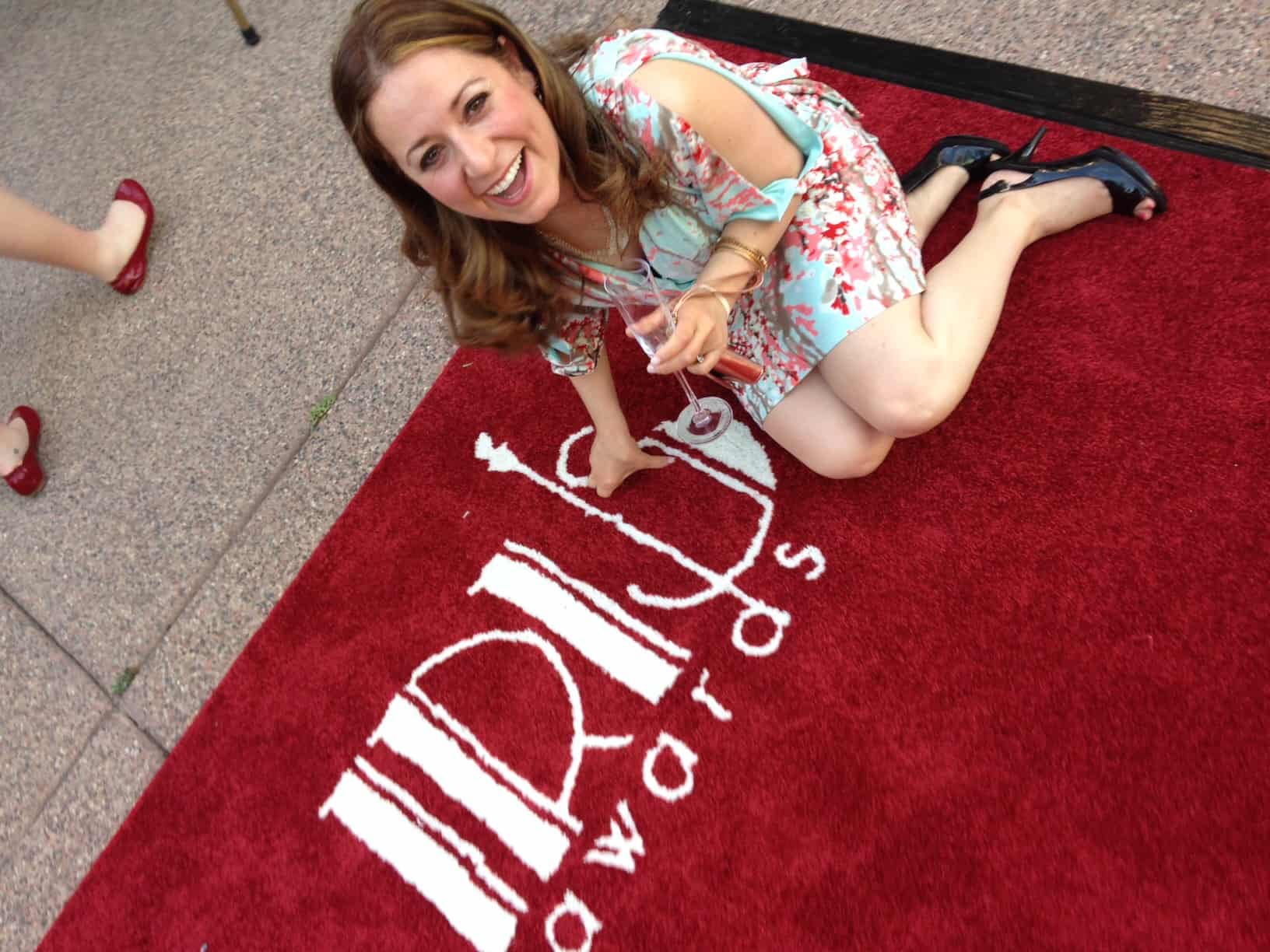 Being back home today was exactly like being at the Ritz for the Iris Awards.

So not really the same at all.

Still, I’m happy to be home, because I missed my family. 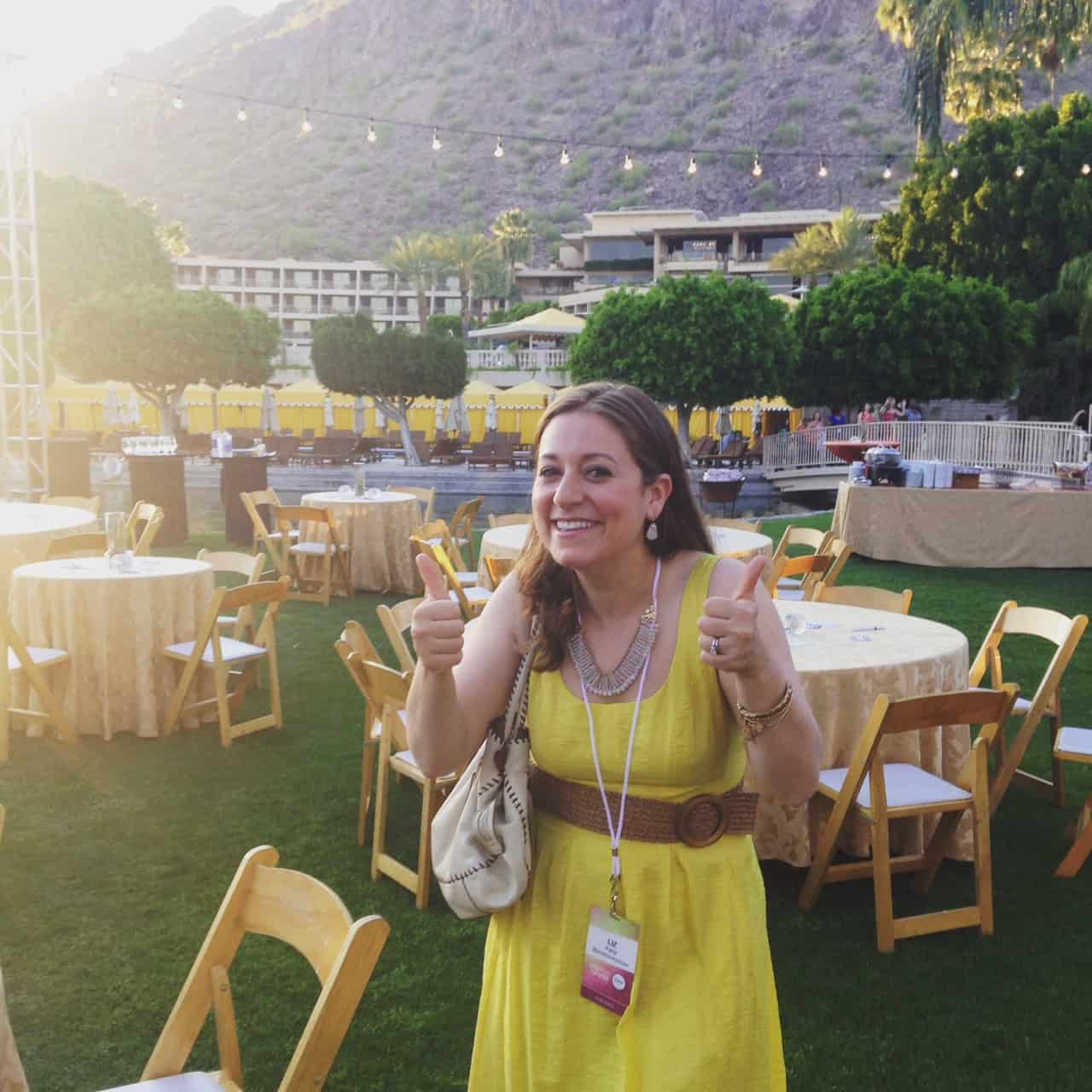 Please note that my dress matches the tents in the background. Coincidental? Well actually yes that was coincidental.

As any of you who were following along on Facebook are aware, my mind was blown on multiple occasions by just about everything relating to this trip. Free hotel lotion? Mind blown. Bags full of swag? Mind blown. Molly Ringwald appearance? Mind blown. Cheese platters on standby? Mind blown.

Here is one small example which will sum up the level of fancy for the week:

At 10:30 a.m. on Thursday a man was walking around offering water to people on a break from the conference. I jokingly asked for champagne. And he went and got me champagne. At 10:30 a.m. True story.

Now, if I’m going to be totally honest here, I can’t say that I achieved my goal of being the Jennifer Lawrence of Mom2.0 Summit. I think I was actually a lot more like Bambi, but not even regular Bambi. Bambi on a steady diet of champagne and red wine.

I’m not sure if it was due to my height (I’m short) or my enthusiasm (I’m excitable) or some combo of the two, but people spent considerable time patting me on the head.

I met a lot of famous bloggers and for most of the conference I felt like a seat filler on Oscar night. REALLY happy to be there and pretending I was a famous person even though I was only allowed in so that Jack Nicholson could use the bathroom. (To be clear Jack Nicholson was not in attendance at this conference. That was just for illustrative purposes).

Here are some of the most exciting people I met and was able to get selfies with (Tip: calm, cool professionals always take selfies at conferences). 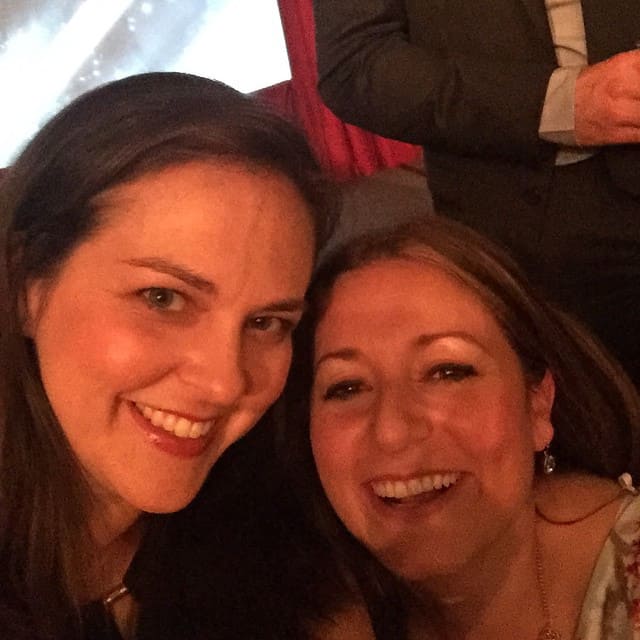 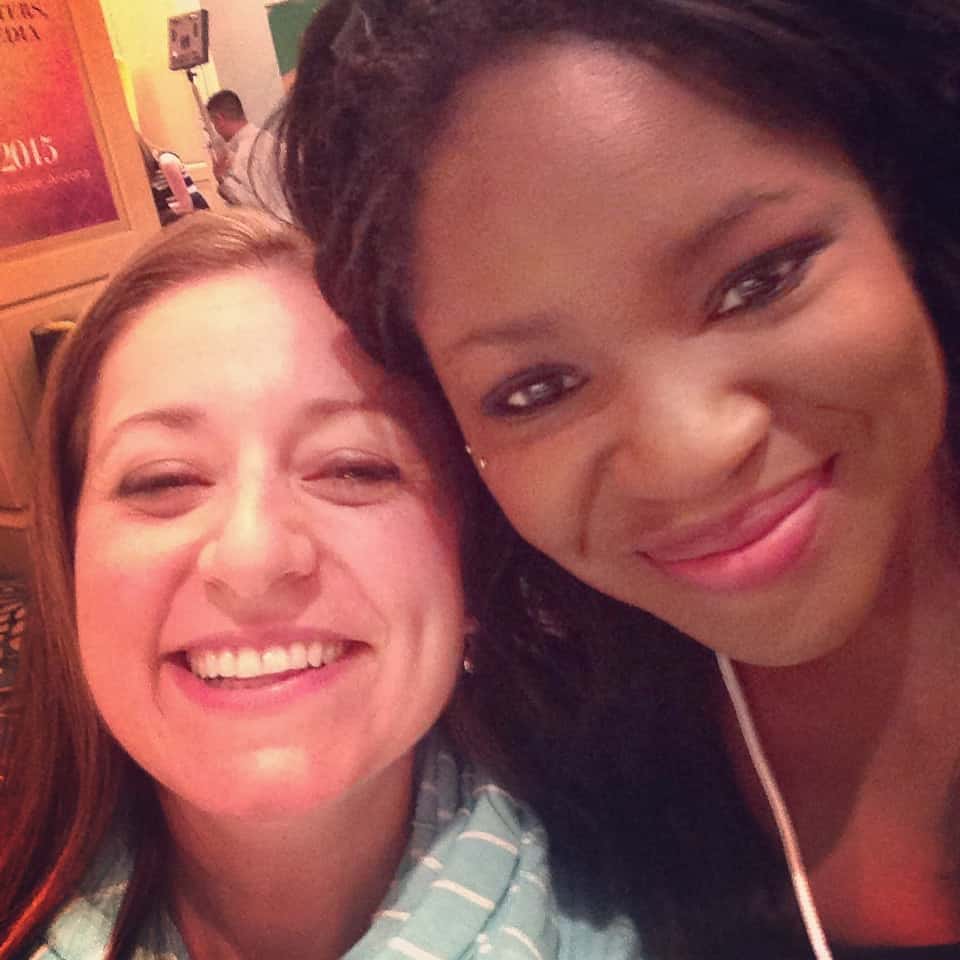 Bunmi Laditan (aka Honest Toddler) and Me 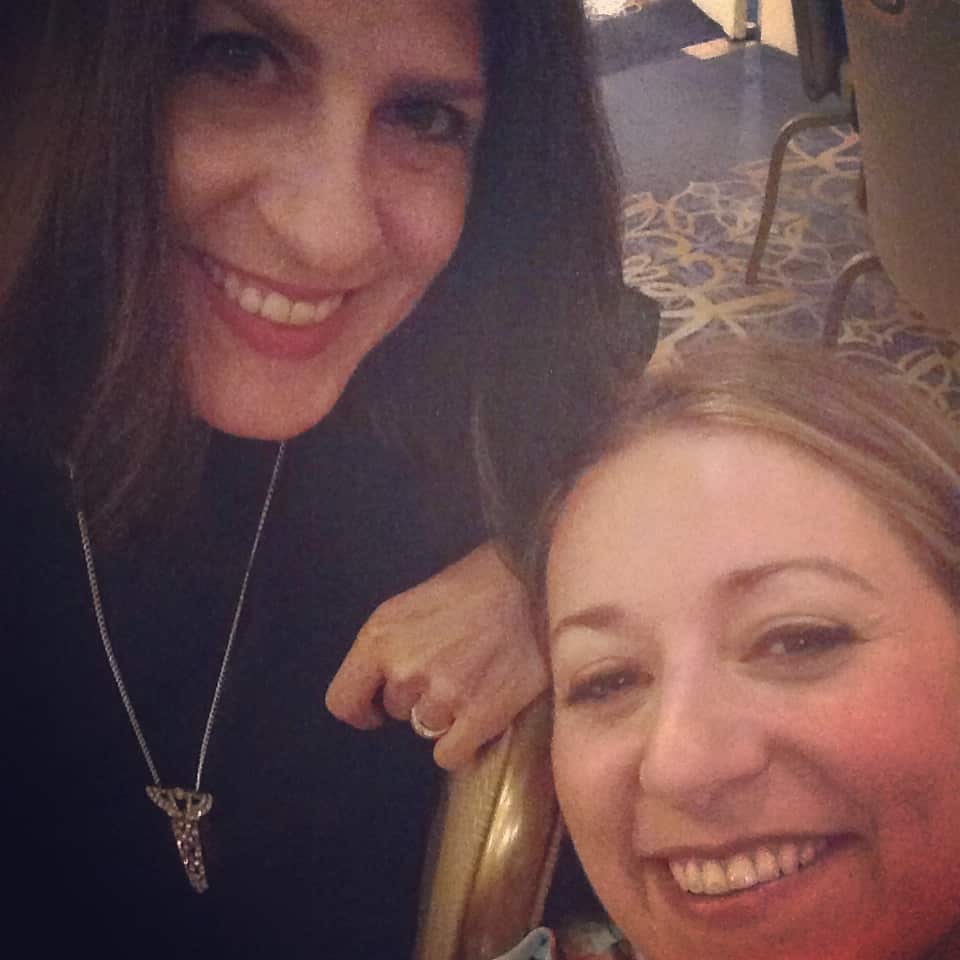 Ilana Wiles (aka Mommy Shorts) and Me 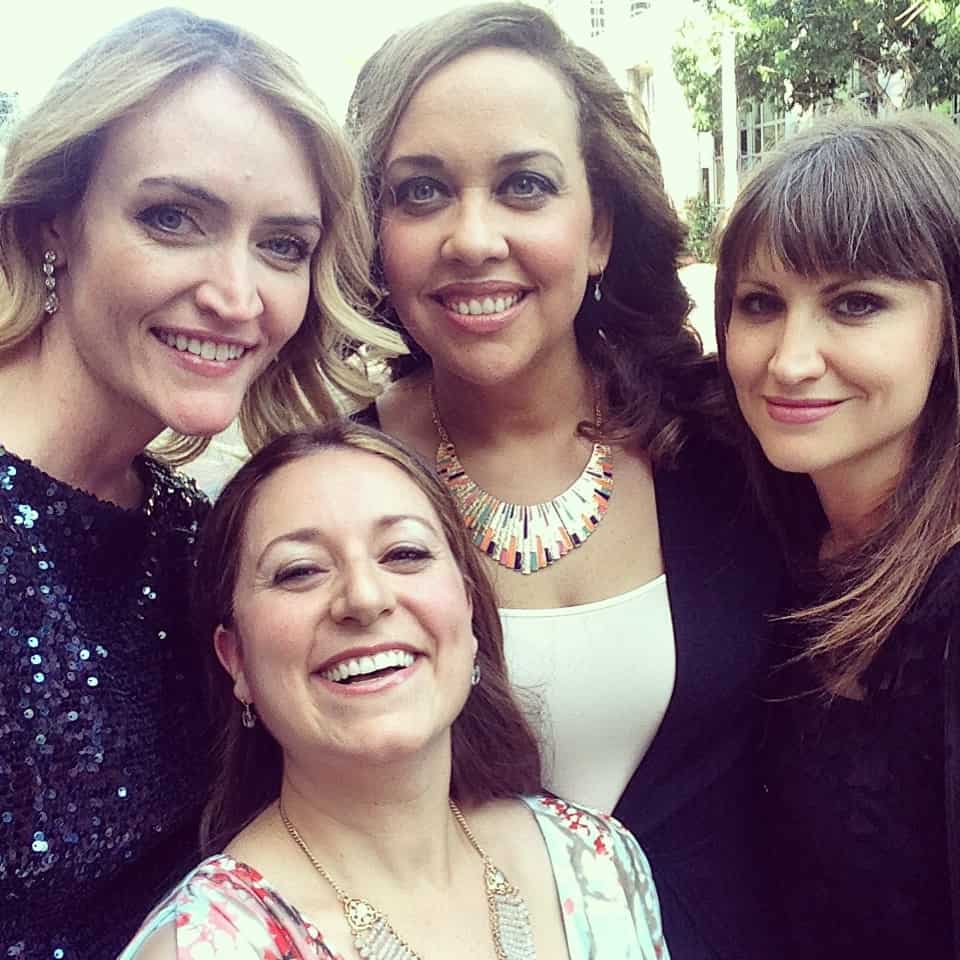 You guys. These people are BIG TIME! I know I look very natural and cool cuddled up with Dooce, but I think it will surprise none of you that I embarrassed myself right before this photo was taken. I asked if I could get a picture, and when we went to take the photo there was no space left on my phone BECAUSE OF ALL THE SPANX PICTURES I had just taken! I had to keep scrolling through and deleting pictures of my dainties while standing with arguably the world’s most famous bloggers. 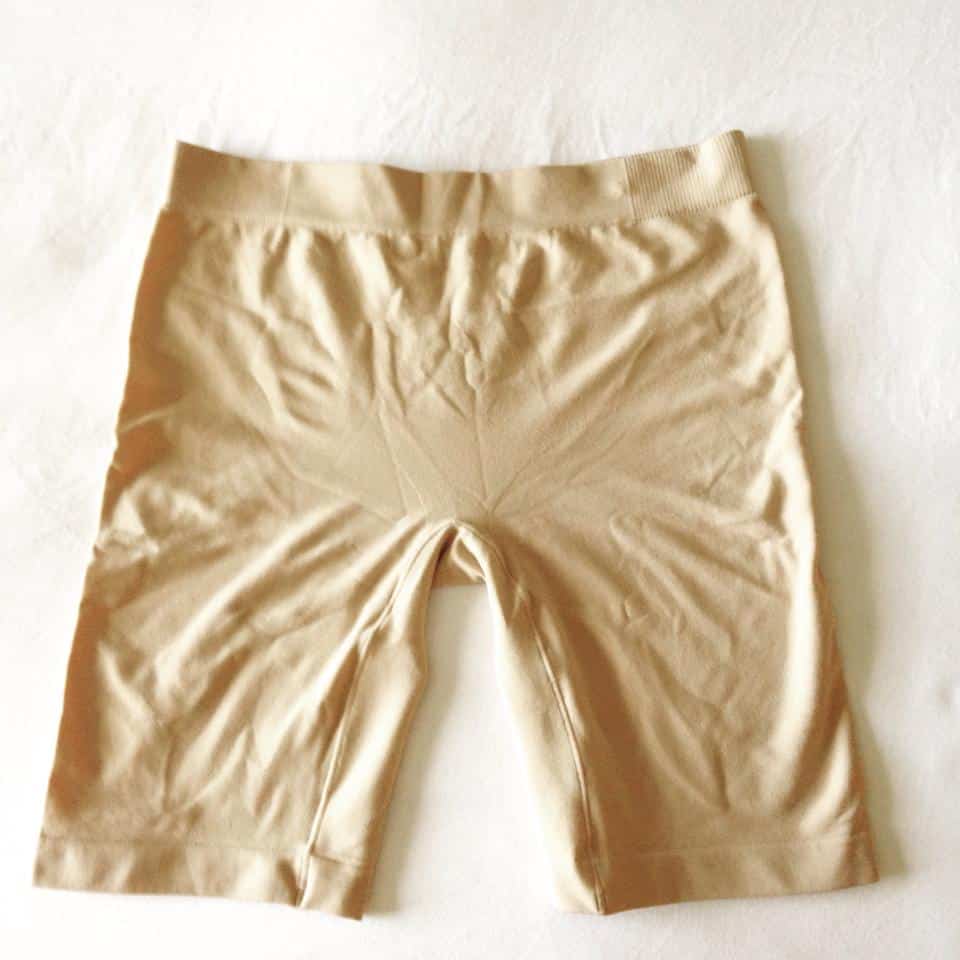 I blame these guys right here. Damn you, Spanx!

I had another especially awkward moment when I was saying goodbye to Jill Smokler (aka Scary Mommy) and instead of giving her a normal hug I went in really low and basically rested my head right on her chest, like a small child might. I just nestled right in there, and while it was certainly cozy it did not have the benefit of adhering to agreed upon social norms.

To make up for these social mishaps I did ROCK the red carpet, as evidenced here: 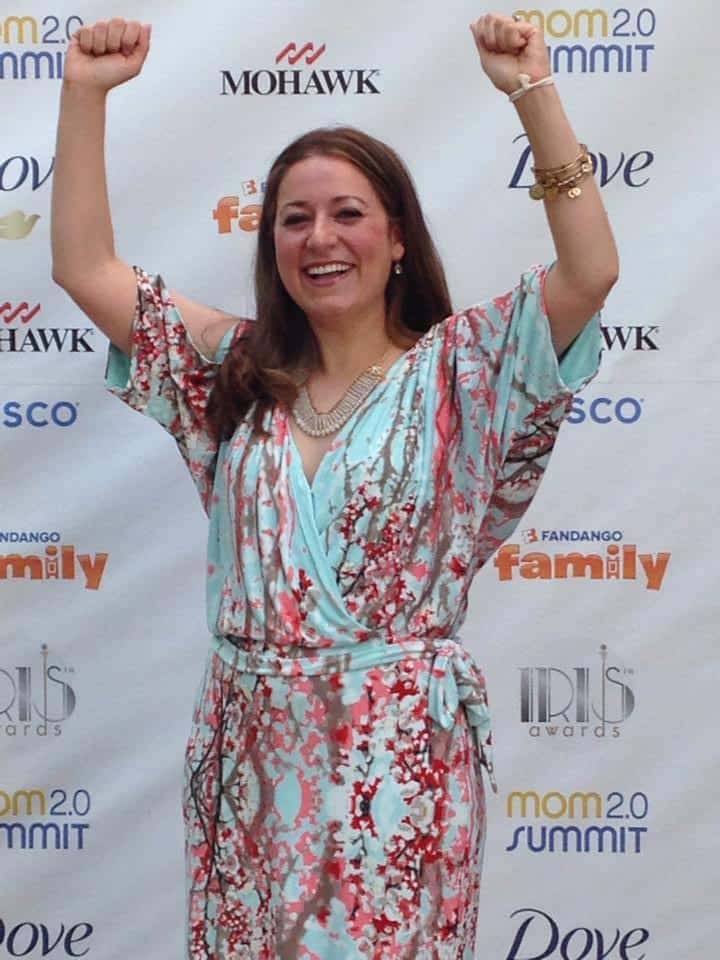 The photographer told me to “do whatever feels natural.” Um, I was on a red carpet. Nothing felt natural. I panicked and started pumping my fists like I was at a Red Sox game. 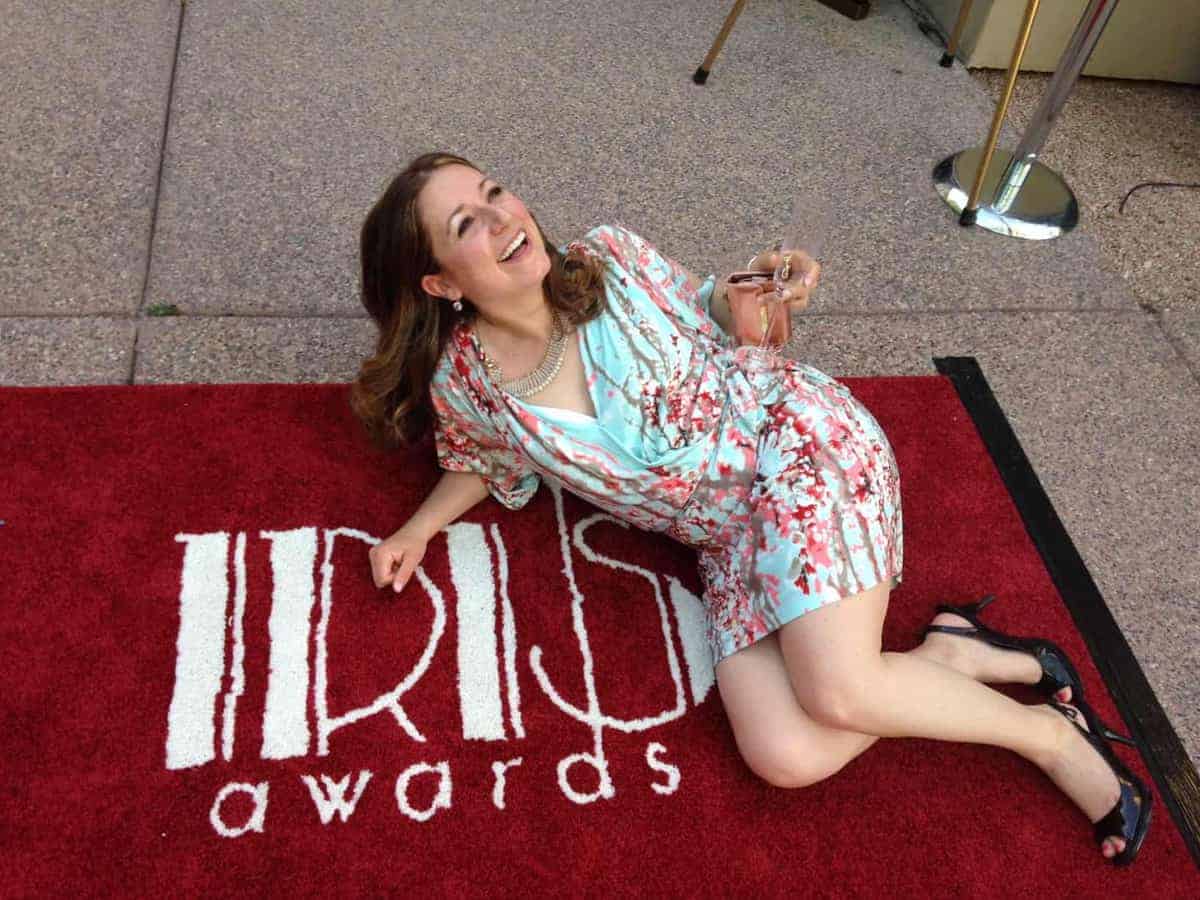 Yes, my bra is showing. No, it wasn’t part of the protocol to be ON the red carpet like this, but I don’t think I’ll ever be this close to one again, so I thought I should really get a feel for the fibers.

As most of you know I was defeated in the Iris Awards by Amiyrah Martin of Four Hats and Frugal. Amiyrah was super nice and deserving and aside from yelling “I was robbed!!!!” I handled the loss gracefully. 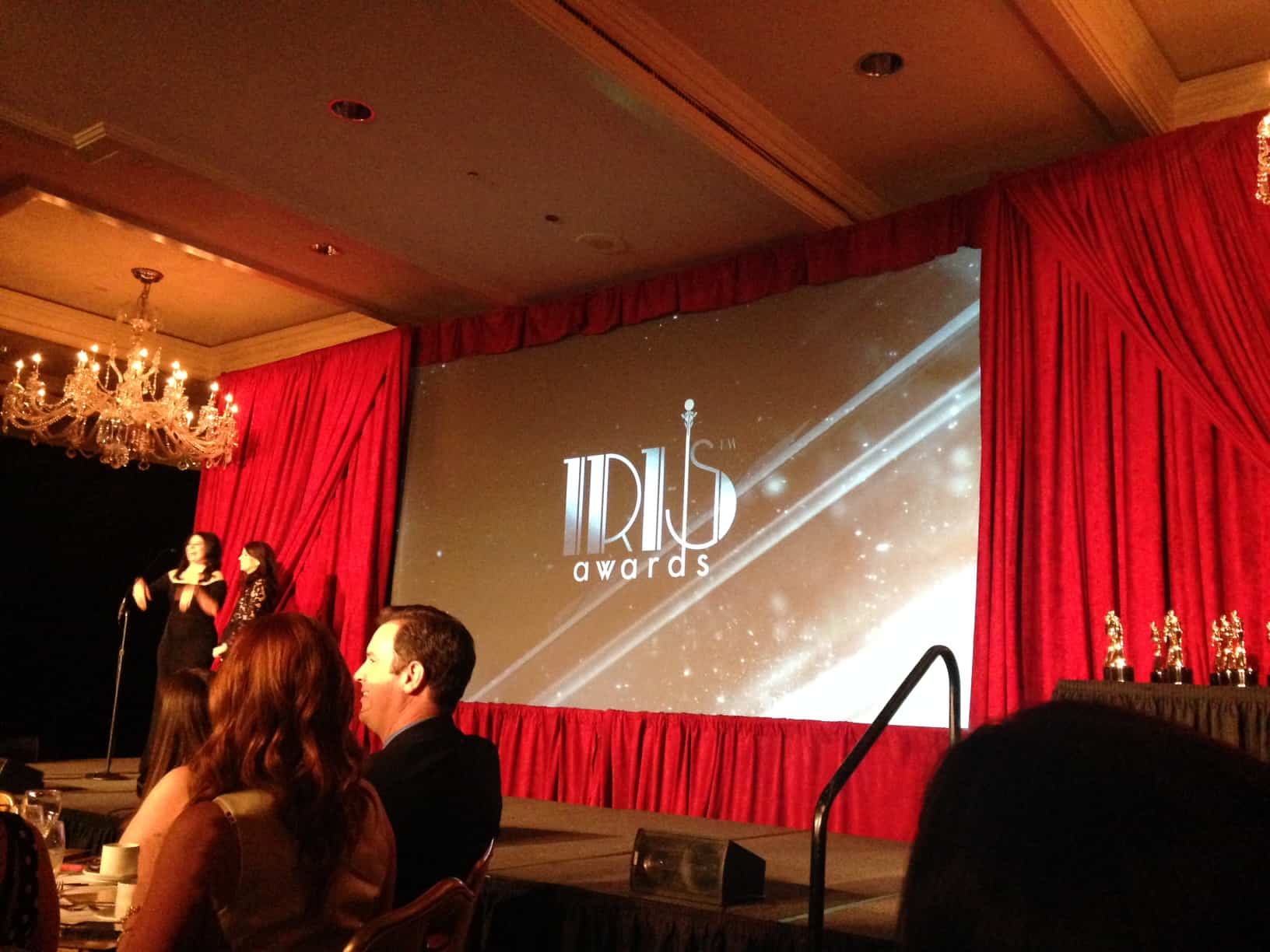 Luckily I was sitting at a table with Jessica Shyba of Theo and Beau fame. Jessica won for Best Photography and so I just posed with her trophy and it was basically like I won. 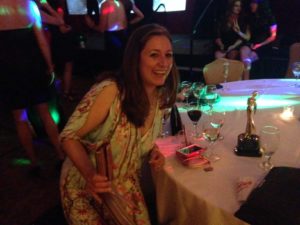 I headed back home on Saturday, and aside from accidentally hitting an elderly woman over the head with her own cane (which I managed to knock loose from the overhead compartment on our flight), getting my right arm briefly trapped between my armrest and the window, and somehow sitting in the wrong row thereby splitting up a family, things were smooth.

This was my view: 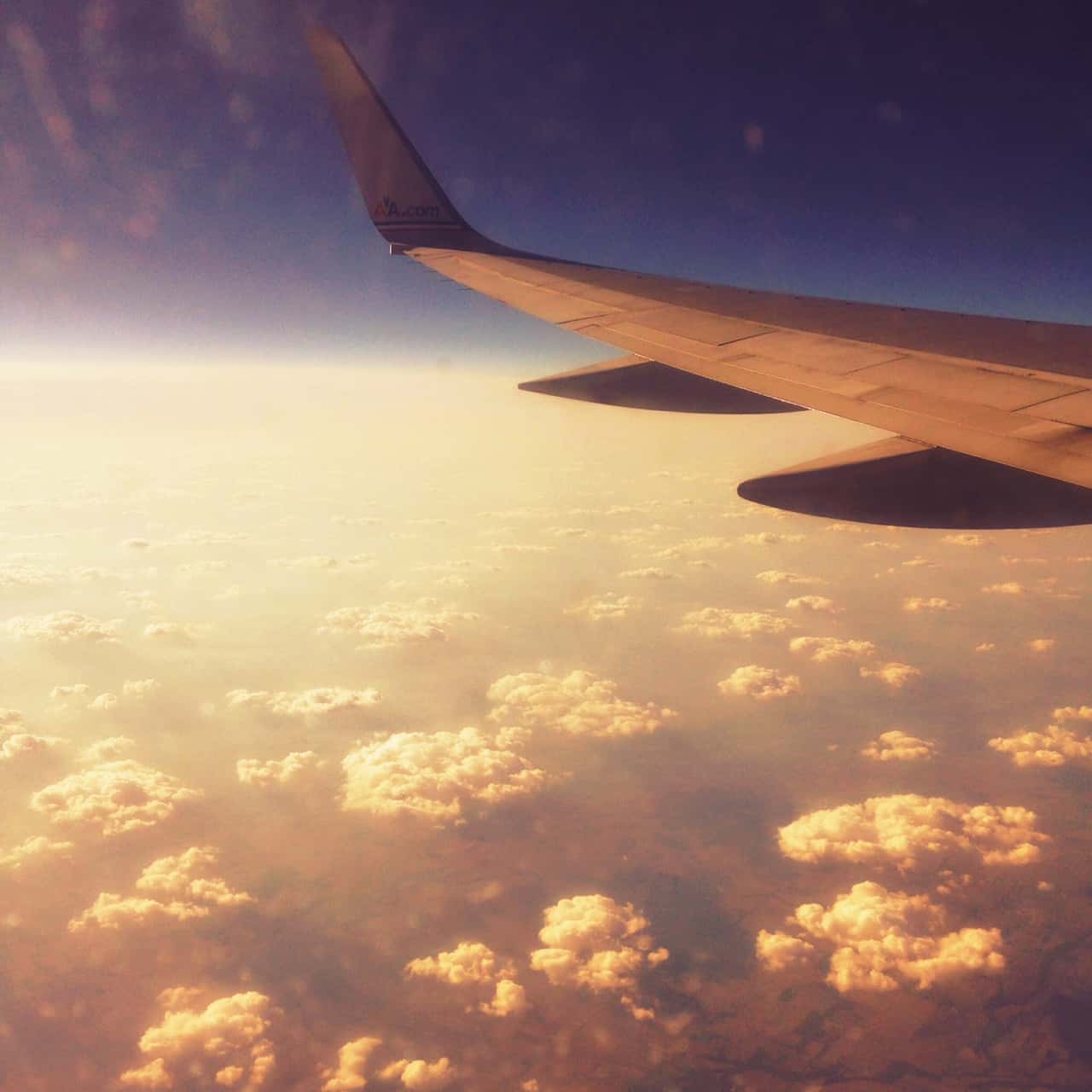 When I got home, flowers were waiting for me. And so was my little boy. And if coming home to that doesn’t make me a winner, well, I don’t know what does. 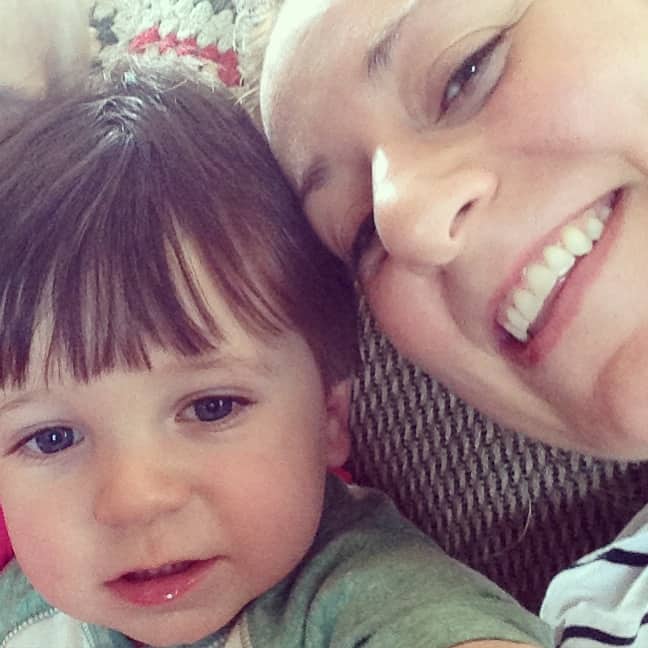 The most important selfie of them all.

Special thanks to AQUOS Crystal and the #totheedge campaign for helping to sponsor me! And to Angela Fellars of Bird in Hand Media for making it possible. And thank you to my new friends Katie and Selina for being such a blast! Katie wrote The Mom 100 Cookbook. You should all buy it. I’m also so happy I met my new buddy Vanessa, who wrote me a poem (yes really): Ode to a Mothership. Vanessa has created an app called Covey that helps connect moms on the fly. Like Tinder but not for sexy-times. I think it’s going to blow up. Check her out here.

And finally: Thank you SO MUCH to all of you who cheered me on, helped me pick a dress, and laughed along with me during my trip via Facebook. I felt the love. And it was awesome.