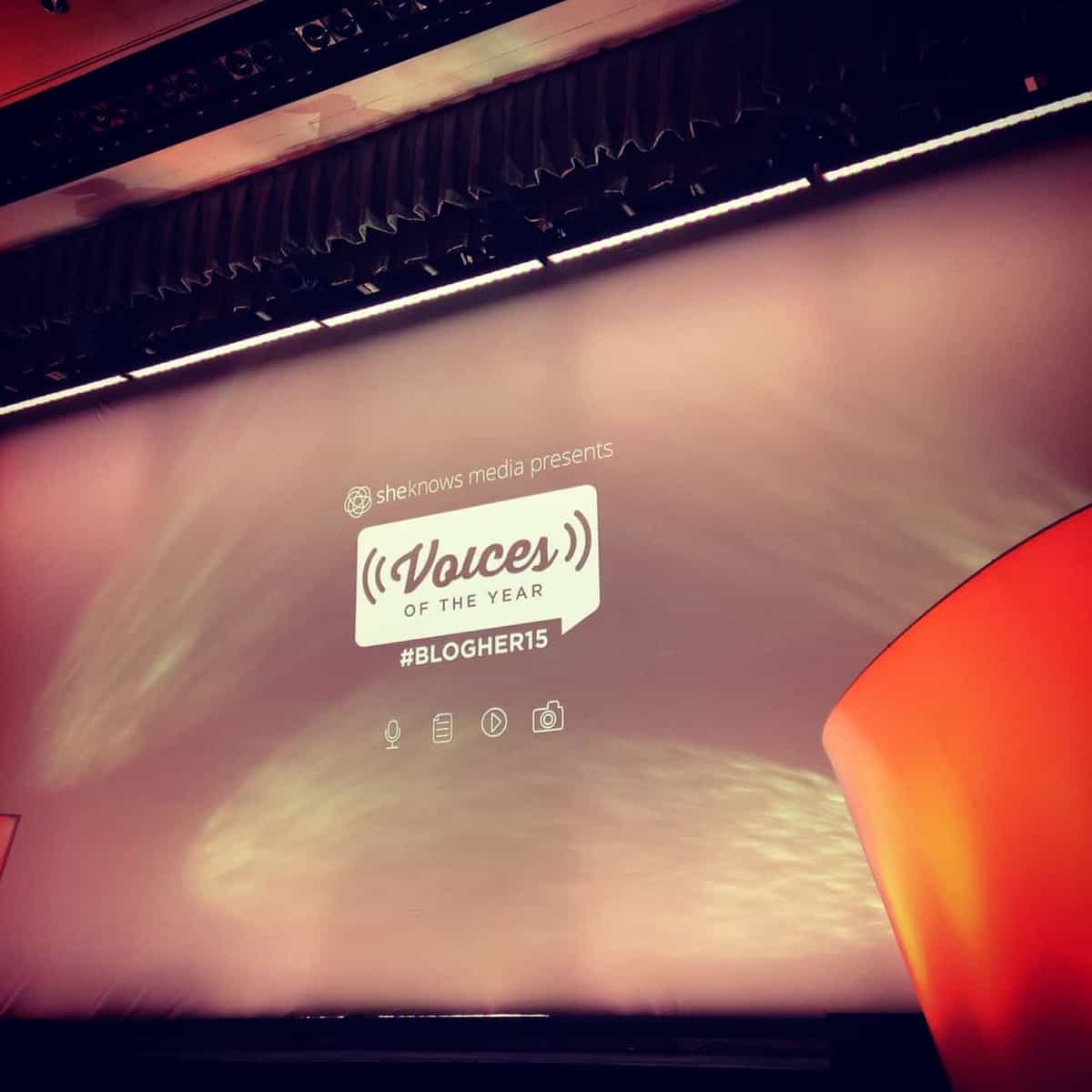 This weekend I was in NYC for the Voices of the Year awards and BlogHer 2015 conference. (The photo below is from the awards ceremony, where the astute among you may notice that I’m wearing the exact same dress I wore to the Iris Awards. It turns out I only have the wherewithal to be fancy once in a calendar year, and the second time around I half-ass it by basically saying “ditto” and hoping for the best. I didn’t even remember my spanx this time, is what I’m saying). 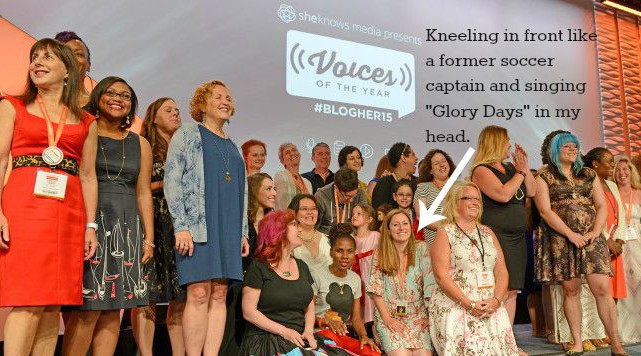 For those of you who aren’t following “Blog Awards Season” closely (which I assume is all of you except maybe you, Mom), the “Voices of the Year” honors are given to individual pieces of work that have been standouts during the year.

I was honored in the “Impact” category for The Child I Didn’t Adopt (originally titled “They Break, You Know” when it was originally published on BLUNTMoms). 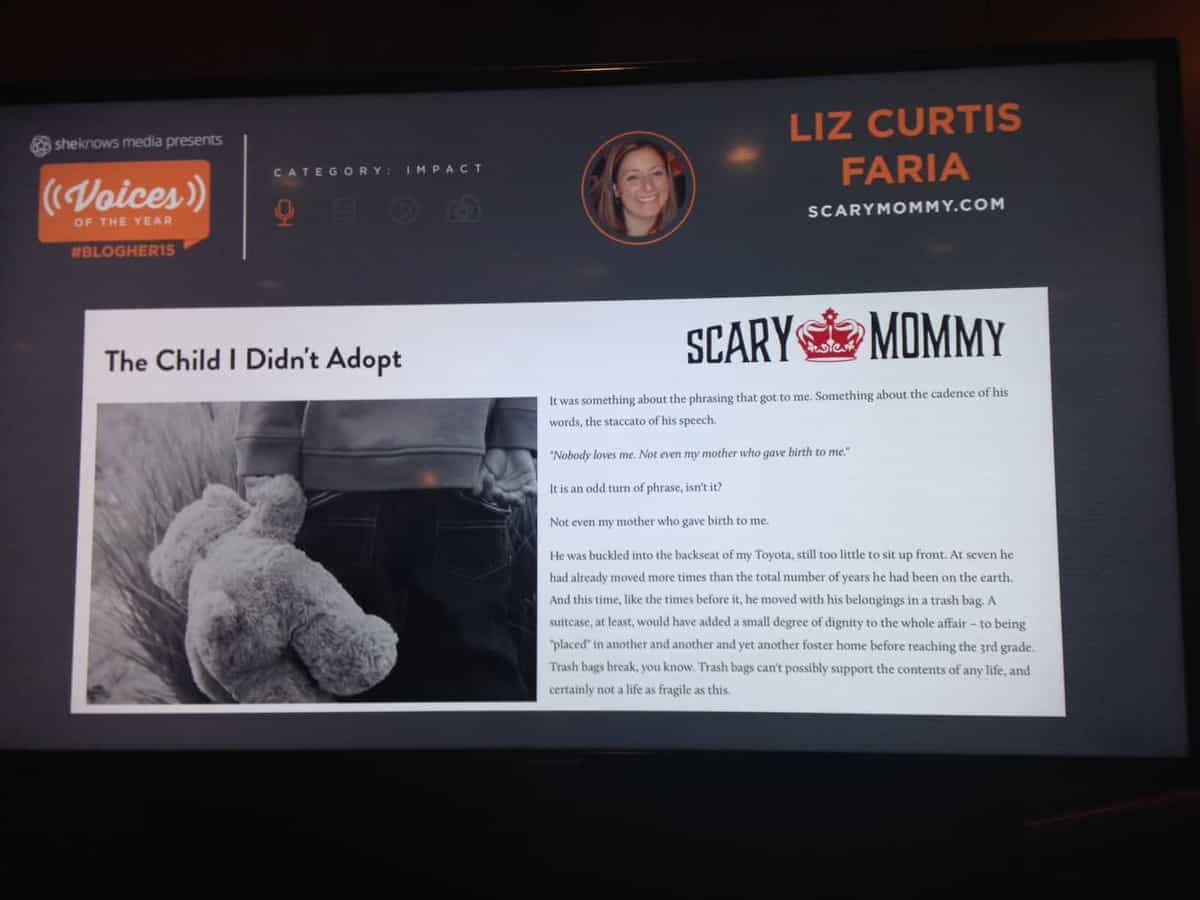 That article was able to reach so many people, and hopefully open up some eyes to the real struggle that children in foster care face. I’m very thankful that it got the traction that it did, and a big thanks to all of you who shared it. 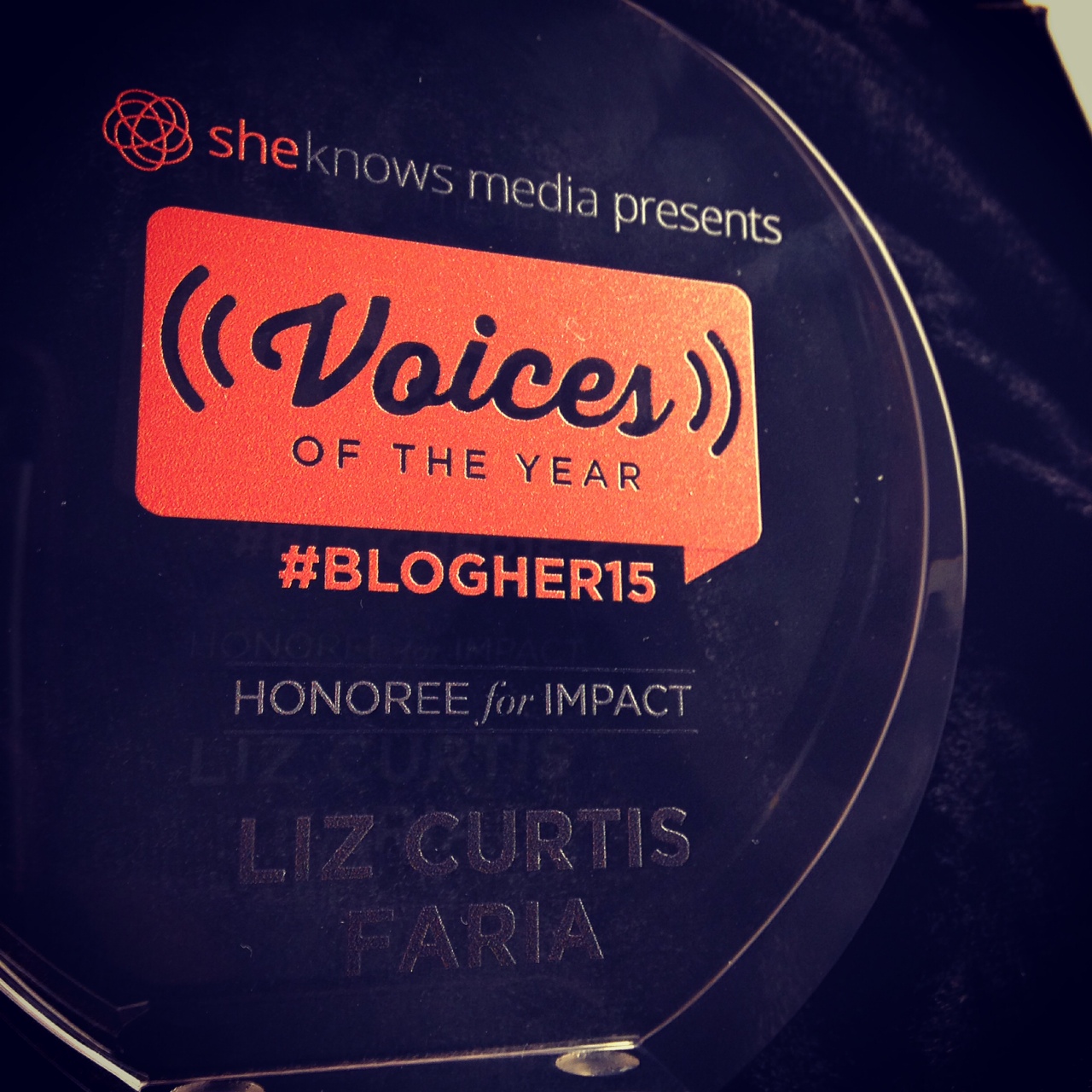 Here I am with my little trophy. It’s basically an Oscar and an Emmy combined, from what I can tell. Yeah it looks a little less fancy than those awards but that’s just because this photo isn’t super clear. If this were a sharper image you’d see that it wouldn’t be misleading to say I’m an Academy Award Winner! I think Gwyneth Paltow will agree. She (like me!) has won an Oscar and an Emmy. We’re basically the same person, Gwyneth and me. 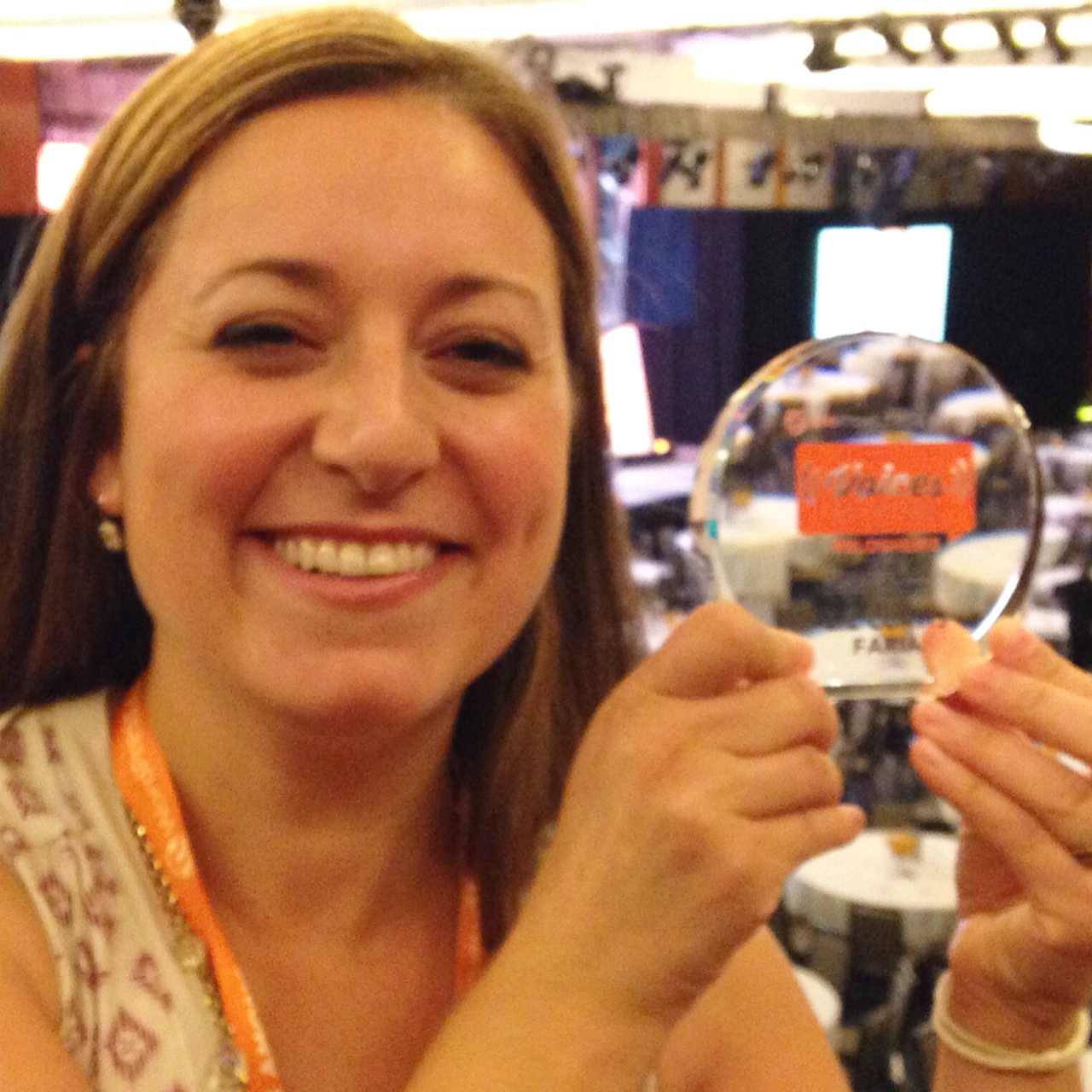 Things I learned on my trip: 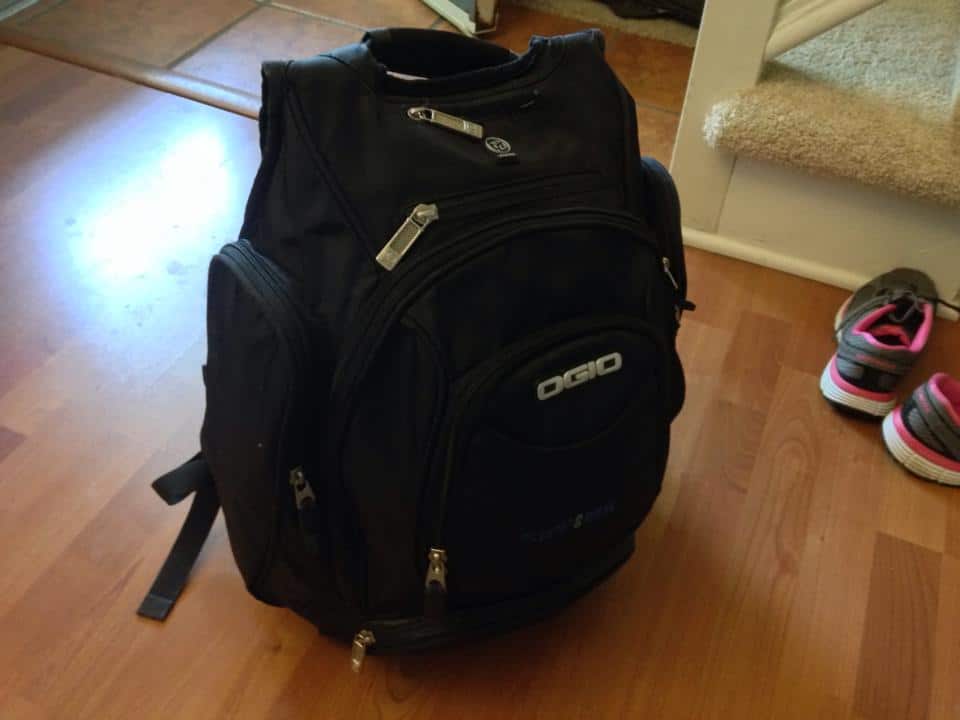 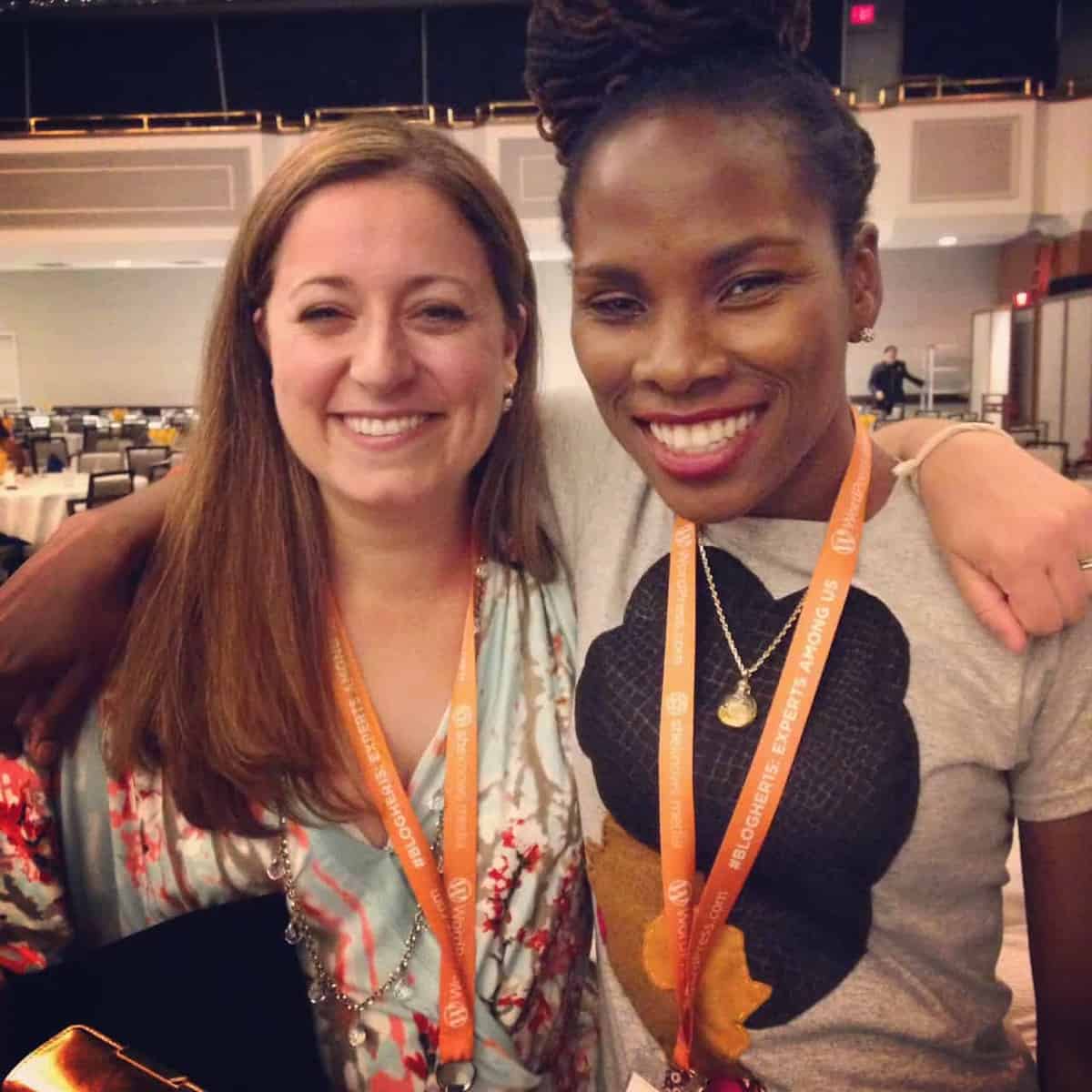 This is me with Luvvie Ajayi, who I am super in awe of. She is an AWESOME writer and also she let me eat her popcorn during the awards ceremony, and I don’t think I would have made it through the night otherwise. I panic when I don’t have access to food during long events.

Other cool Voices of the Year winners: Do yourself a favor and check out this Kickstarter video called #twinsters. Seriously. Watch it. Such a cool story, and the video is under 3 minutes.

And for a good laugh in under 60 seconds: Deva Dalporto of My Life Suckers‘s “Male Pattern Blindness” video.

And that’s it! I’m happy to be back in suburbia, getting to spend time with this stud: 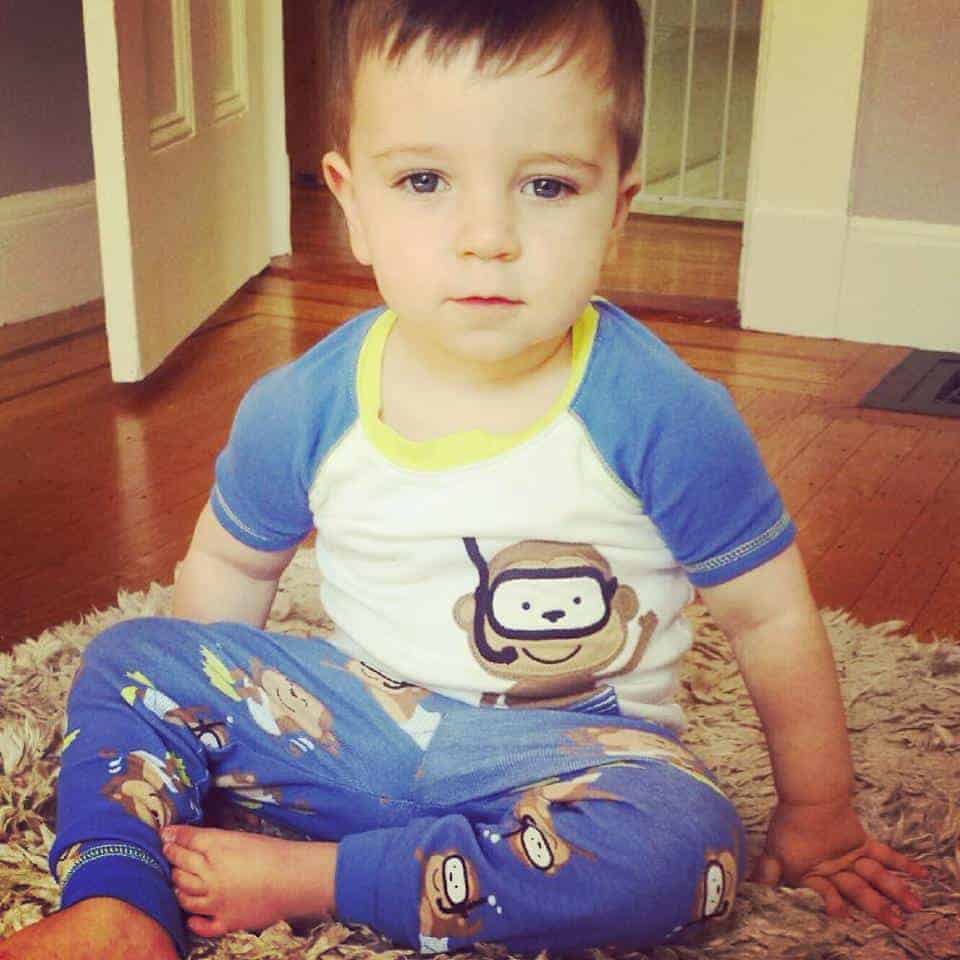 Good thing I didn’t bring him to NYC, because between the piercing blue eyes and monkey pjs he would have landed an agent in no time. And is that the life that I really want for my offspring? (We’ll table that question until we see how expensive college is by 2031).